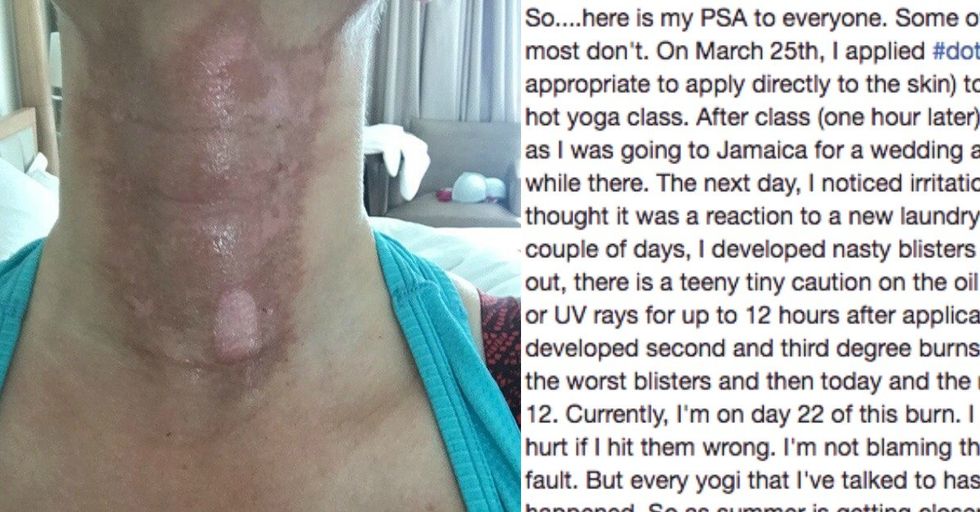 If You've Ever Used Essential Oils, You Need To Read This Woman's Graphic Warning

Essential oils have been having a "moment" as of late, given how people are more aware of the chemicals and toxins in the environment. But the more popular they become, the more people are reminded that just because something is “natural” doesn’t mean it can’t harm you.

We've all (or, well, most of us) heard of the benefits of essential oils.

The thing is: Most people think that they're harmless alternatives.

While many aren't convinced of how well they work, they see them as, at the very least, not causing any harm.

Essential oils may or may not be effective, but as one woman's story and moving photos reveal, they're certainly not always "harmless."

In fact, they are actually QUITE dangerous unless you know what you're doing, and even more so for both animals and very young children.

So before you go sprinkling them around like fairy dust, you'll want to read this account of what happens when natural remedies go really, really wrong.

The pics associated are eye-opening, but aren't too gross, so don't be scared to see the ugly truth.

You deserve to know what the consequences of these "harmless" oils really are sometimes.

Just ask Elise Nguyen, who posted some photos on Facebook that will make you cringe in sympathy, but that serve as a very important warning.

The pictures speak for themselves.

And there are more than 21,000 comments — some thanking her, but others not at all surprised that mixing oil and UV rays would cause this to happen.

Regardless, it's a good reminder that oil and UV rays don't mix, and that just because something is "natural," doesn't mean that it's always safe.