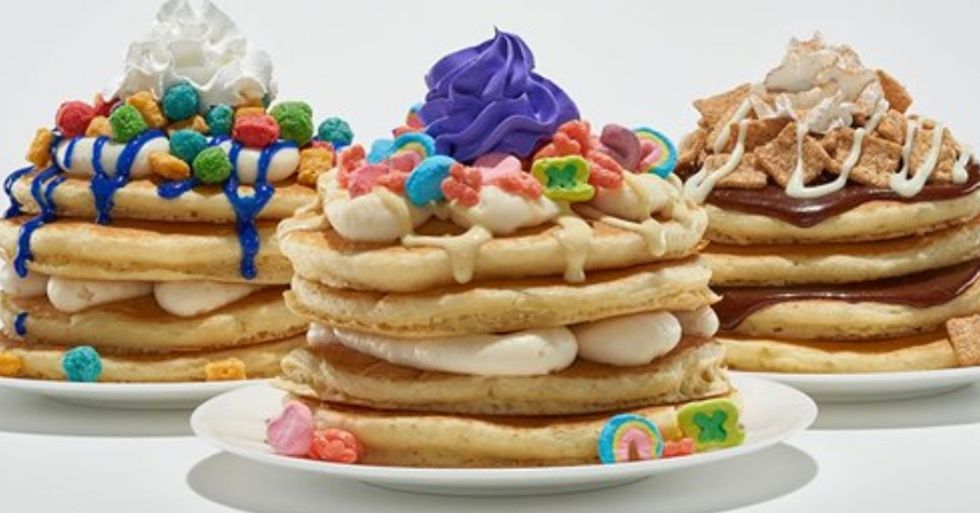 You can never go wrong with pancakes, can you?

After IHOP released their pancake pizza, they decided to crank things up a notch by introducing a whole new range of cereal inspired pancakes and we're pretty goddamn excited.

There's 7 new stacks to choose from and they have taken the world by storm. Keep scrolling to find out what other surprises they also have in store...

Raise your hand if you love pancakes.

We totally agree with you with that one.

Remember when IHOP did this?

IHOP created the "pancizza" for one weekend only, in honor of National Pizza Day which happened to be on February 9th.

It came in 3 different flavors.

You've got your classic plain buttermilk pancake, for those who wanna stick with what they know. Then, there's also a bacon and cheddar, and a cupcake pancizza!

From March 2nd to April 12th, their all-new cereal pancake menu will be available for us all.

"One buttermilk pancake topped with vanilla sauce, marshmallow cereal, and sweet purple whipped icing, and one scrambled egg, one bacon strip, and one pork sausage link."

The chief marketing expert at IHOP said this:

“Shortly after our test kitchen chefs first began playing with the idea of Cereal Pancakes, we served them to our guests in focus groups and one of the main things they told us was that it made them feel nostalgic for those Saturday mornings watching cartoons and eating cereal when they were kids."

And if you need a little more convincing...

IHOP has announced that kids eat free! So, if you're twelve and under, this one's aimed at you!

So, what are you waiting for?

You have until April 12th to indulge in these nostalgic pancakes. If you're in the mood for more fast food news, keep scrolling...