Ikea Recreated the Living Rooms from 'The Simpsons,' 'Stranger Things,' and 'Friends' and You Can Buy Everything | 22 Words 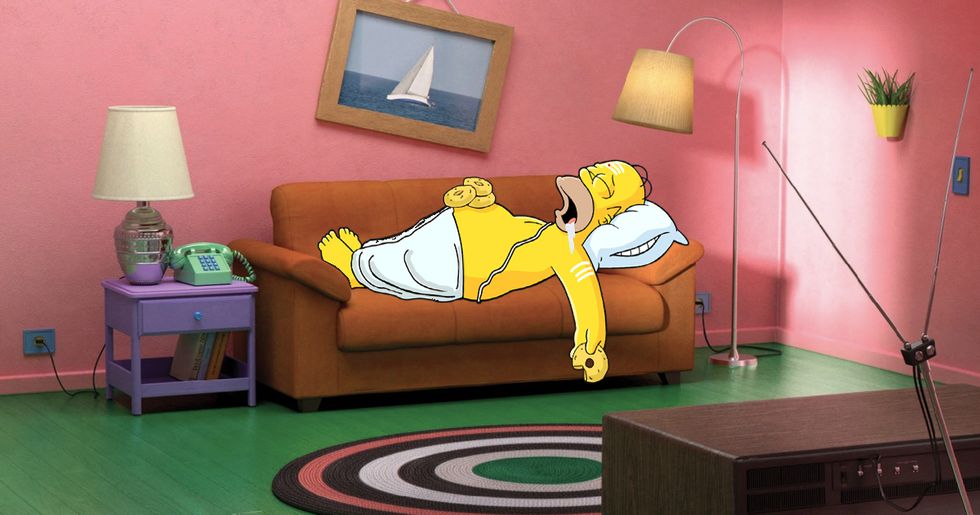 Ikea Recreated the Living Rooms from 'The Simpsons,' 'Stranger Things,' and 'Friends' and You Can Buy Everything

Shopping at Ikea is such a fun experience. You walk along a predetermined path through fully decked-out living and bedrooms before getting to the picture frames and juicers and then, finally, the bulk bags of weird candy and crackers.

But what if, while following the handy arrows along the floor, you stepped into another world... a world... from television? For TV fanatics, that's pretty much the dream, isn't it? We're sick of the real world, and we want our problems wrapped up in 22 minutes plus commercials, goddamn it!

The United Arab Emirates Ikea has put together what they're calling the "Real Life Series," in which the living rooms from popular TV shows like The Simpsons, Friends, and Stranger Things are being recreated with IKEA furniture. You're definitely going to want to check out the pictures of the real-life TV spaces, as well as our picks for other TV living rooms we want to see recreated in real life.

Who doesn't love falling into the world of their favorite story?

When we were hunter-gatherers, it was those who could take in environmental clues and tell themselves a story ("These broken branches and footprints tell the story of a deer going thisaway.") that were more likely to eat, survive, and procreate. Evolutionarily, human beings are wired to love stories.

But even better, is literally falling in to the world of a story.

Who doesn't want to get sucked into a story, and live in a magical, fictional world? (The answer is "people who can manage their lives and don't fantasize about escaping.")

We've gotten a few great recreations of fictional universes, including the Wizarding World of Harry Potter.

Universal Studios' Wizarding World of Harry Potter lets you walk down Diagon Alley and there's even a dragon climbing all over Gringotts bank. What a great experience this park is for those of us who never got our letter from Hogwarts.

And Nintendo is getting close to opening a Universal Park version of its iconic Mario world.

Set to open in 2020, Super Nintendo World (another Universal Studios park) is going to offer video game fans the chance to break blocks with their heads and jump on turtles until they die.

But theme park attractions only offer release for a day at a time.

We can't live at our favorite theme parks. Eventually, you have to go home (because no matter how great a hiding spot you think you've found, the security guards will find you.)

We want to live in our favorite TV worlds.

For those who love their TV, movies, books, and comics so much they want to exist in their universes, a day trip isn't enough. We want to live there day in and day out.

Because the real world? It's brutal.

After all, you never hear about sitcom characters trying to figure out how they're going to pay their student loans, do you?

Thankfully, Ikea's around to help us build a fantasy.

The United Arab Emirates Ikea recreated living rooms from classic TV shows, and honestly, they did a pretty great job.

Are these recreations close enough to the shows to trick us into thinking we're in these shows?

Well, you'll have to decide for yourself when you see them...

To be fair, I don't know if I'd want to imagine living in the Friends universe.

I'm just gonna say it — I would not want to spend time with Joey. He tried to steal Rachel from Ross one time and it was so uncool I would have to spit at him every time I saw him.

And Stranger Things is a true nightmare-verse.

Living in a world where a horrible monster could jump out and surprise me when I least suspect it? No thank you! I already learned that I don't like that feeling last Christmas when I spent the week at my in-laws' house.

I'd like to see Ikea recreate the Seinfeld living room.

Wouldn't you love to imagine yourself living in the Seinfeld universe? There, even people as rotten as Jerry and George can consistently meet attractive people who for some reason are willing to date them.

I'm sure that if some video game modder could whip up the Seinfeld apartment with Super Nintendo-quality graphics, the guys at Ikea could recreate it in no time.

The Smallville house would be fun too.

The rustic interior of a Kansas farmhouse would be delightful to live in, even if you're not the kind of person who wants to trick their brain into thinking they've fallen into a fictional universe.

Not just because it'd be cool to imagine having Superman's powers...

But if you are the kind of person who wants to trick their brain into thinking they've fallen into a fictional universe, you could do a lot worse than being the all-powerful (and incredibly handsome) standard for both masculinity and humanity.

... but because it'd be cool to imagine having supportive parents.

But really, the fun of imagining you're in the Smallville universe is imagining your mom and dad giving you wholesome moral advice instead of badgering you to give them some grandchildren.

Another great potential recration for Ikea? The Hatch from Lost.

Ooh baby, was there ever a TV moment more exciting than when Jack and John Locke blew open the Hatch and ventured inside to find a chill '70s bunker occupied by a Scotsman?

After they found the Hatch in season two, Lost's castaways had to press a button every 108 minutes.

Once they'd opened the hatch, the passengers of Oceanic flight 815 had to punch in the numbers 4, 8, 15, 16, 23, and 42 every 108 minutes, or else... something would happen. It was never really explained. (They didn't have to answer all the mysteries! Lost was a character show, goddamn it!)

I just think it'd be nice to have something to give my life a little structure, is all.

The couch Lady Mary is sitting on here would cost more than a lifetime's worth of Ikea meatballs.

Because on Friday Night Lights, the real living room... was the field. (That sounded more inspirational in my head.)

Without further ado, here's a refresher on The Simpsons living room.

Not a bad looking living room, even if the couch looks like it would be rock hard and have just the thinnest cushions. Also, the painting hung on the back wall doesn't do much to inspire the imagination.

And this is the Ikea version.

Whoa, it's like looking at a cartoon come to life. (That's what we call the ol' "Reverse Roger Rabbit.") They even got that overbearing pink color of the walls right.

Here's a refresher on the Friends living room.

It's so much more cluttered than I remember it. What are all those frames all over the wall? Did each Friend hang a bunch of frames on the wall thinking no other Friend would hang a single frame on the wall?

Remember the iconic empty frame on the door?

Everyone I knew bought a replica of this to hang in their apartment.

It looks good, it's just missing something. Hmm. What could it be... Oh yeah! It's missing about 4500 frames.

Finally, this is what the Stranger Things living room looks like on the show.

Honey, you've just gotta have a creepy alphabet scrawled on your wall to communicate with the other side. It is all the rage in the interior decorating world.

And here it is, Ikea-style.

Aw, look at how much cheerier the place looks when all the lights are on! That's not just nice to look at, it's also nice to know that in the Ikea version of this living room, the folks on the other side are very chatty.

The Ikea campaign's tagline is "for real families," but honestly, how would you react if you went over to someone's house and this was their decor?

Of course it's fun to imagine remaking your house to look like a location from pop culture, but if your buddy was actually painting his walls that abrasive Simpsons pink? Wouldn't you, you know, ask if they were okay?

They should be okay, so long as they aren't buying any yellow face-paint.

That said, who are we to judge someone for making their living space up to look like a cartoon living room? But the moment — the moment — that buddy puts on a Stupid Sexy Flanders jumpsuit? I am calling the police.