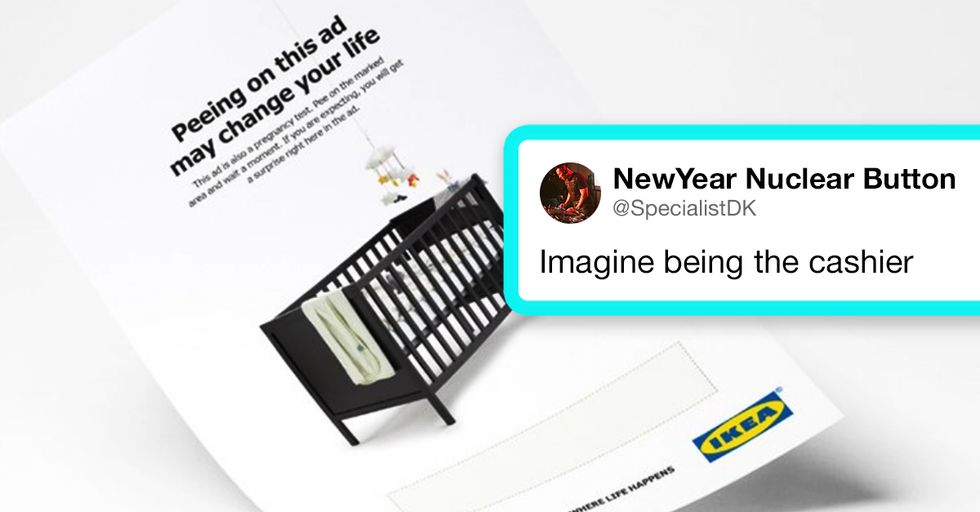 Ikea is known for product names that sound to our untrained American ears like words Swedish people might utter if they dropped a coffee table on their toe mid-construction. (Florvåg! Snöstjärna! You get the idea) Or as a place where couples go to purchase furniture but end up having a relationship-ending meltdown trying to agree on the perfect particle board bed frame (we’ve all been there). But this week they are in the news for something entirely different: They want you to pee on their ad to see if you are or not pregnant and, stick with us to the end here, it might actually be kind of a cool moment in women’s liberation.

In a new ad campaign, Ikea has released an ad which features a home pregnancy test on an advertisement for a crib.

The ad shows a photo of their crib and the words “peeing on this ad may change your life". Then they invite you to go ahead and pee on the page where they have embedded a strip of paper that acts as a home pregnancy test, and if your pee contains a hormone called human chorionic gonadotropin (hCG), a hormone produced only during pregnancy, the ad reveals a discount code you can use to purchase that new crib.

Is this the dystopian future? Maybe.

While you have to admit it’s kind of brilliant marketing (we are writing a story about it after all), the ad is a bit unsettling. Is it really Ikea’s business if your pregnant or not? Presumably if you were going to buy a crib from Ikea, you probably were already planning on having a baby to put it in, so is Ikea assuming people will actually be using this ad as the way they find out if they are pregnant? Is this the way we find out if we are pregnant now? By peeing on an ad which prompts us to immediately go out and purchase a crib? It feels very Black Mirror.

Believe it or not, this actually isn’t the first time a company has used pee in their advertising.

In 2001, Animal Planet put urine soaked ads at the bottoms of lamp posts so that dogs would stop to sniff them, the owners walking the dogs would have to stop and then they, too would see the ad.

Also, just to clear things up, the ad reveals a discount code, but you don’t have to bring in the pee-soaked ad to get the discount.

Although, we’re sure some people have tried. The promotion also applies to anyone who is starting a family, couples who are adopting a child or having a child through some other means where hCG-rich pee may not be readily available, like surrogacy, are also eligible.

When you think about it, having a home pregnancy test in a magazine is kind of amazing.

First of all: score, free pregnancy test. Those things cost like ten bucks a box. This is actually very on-brand for IKEA, which purposely makes affordable versions of products. The creator of the ad, Magnus Jakobsson, even acknowledged that this was IKEA’s aim in creating the promotion.

It’s pretty wild that this technology can be widely distributed in magazine form.

It may be hard to imagine, especially for us millenials who are used to the idea that anyone, anywhere can know within 90 seconds if they are pregnant or not thanks to the infamous little blue lines of a home pregnancy test, but home pregnancy tests haven’t always been so readily available.

Actually, testing urine to see if a woman is pregnant or not is a relatively new technology.

Before the 1920s, predicting pregnancy was hard. Hormones hadn’t yet been discovered, so scientists couldn’t pinpoint hCG, the hormone that predicts pregnancy. But that doesn’t mean people didn’t try for themselves. In ancient Egypt women tried to predict pregnancy by peeing on wheat and barley seeds. If the seeds grew, the woman was said to be pregnant. While that test may seem silly, it has been proven to be 70% accurate! Scientists think maybe this is because elevated levels of estrogen in women’s urine could help promote the seeds’ growth. (Aka women are amazing and we can literally make seeds grow from our waste.)

The technology to test a woman’s urine to see if she is pregnant or not has only been around since the 1920s.

In 1927, scientists developed a way to (you’re reading this correctly, don’t worry) inject a woman’s urine into a mouse, rat, rabbit, or frog to see if she was pregnant. If the animal went into heat, that meant the urine contained the hCG hormone that predicts pregnancy. They had to dissect the animal to see if it was in heat, so this meant every time a women got a pregnancy test, some cute little animal in a lab somewhere kicked the bucket.

It wasn’t until the 1960s when they ditched the animals and started being able to determine if the hCG was present with an immunoassay test done in a lab.

Rats surely rejoiced when scientists started chemically testing for pregnancy without the use of animal subjects.

The woman would have to get her urine tested and then the doctor would come back with the results. You know, just the normal news every woman can’t wait to hear, “Congratulations, your pee made a rabbit go into heat!"

Except, not every woman wants to hear that news.

So guess who did something about it? That’s right: a woman!

Directly following the legalization of abortion in 1973, this was a huge contribution to women’s liberation.

Before home pregnancy tests, women who didn’t want children but were pregnant, by default, either had to have told a doctor or just guessed that they were pregnant. Now, with legalized abortion and the ability to test for pregnancy in their own homes only a days after a missed period, women could discreetly and safely terminate their pregnancies if they chose.

But the first home pregnancy tests were nothing like the little stick (or magazine advertisements, as the case may be) we have today.

If you’ve seen the show GLOW, maybe you remember Alison Brie’s character taking the 80s version of a home pregnancy test, which looked like a little chemistry set. Actually, they basically were little chemistry sets, they involved several steps (and somehow sheep’s blood?) and took several hours to produce results. Can you imagine waiting for that?

Circling back to the Ikea advertisement: it’s still creepy, but also kind of cool.

Ikea isn’t fooling anyone into thinking they are using their pregnancy test pee ad to promote women’s liberation: they are trying to sell cribs. But the idea that this technology has come so far and is so widely used that a furniture company can just stick it in their magazine to sell cribs is pretty amazing, especially when you consider what it means for women. Women now have the freedom to just pee on a glossy page instead of having to get a man to test her pee for her (or murder a frog) and tell her she is pregnant. So if this is the dystopian future, at least we have freedom. And convenience. And moderately priced cribs.