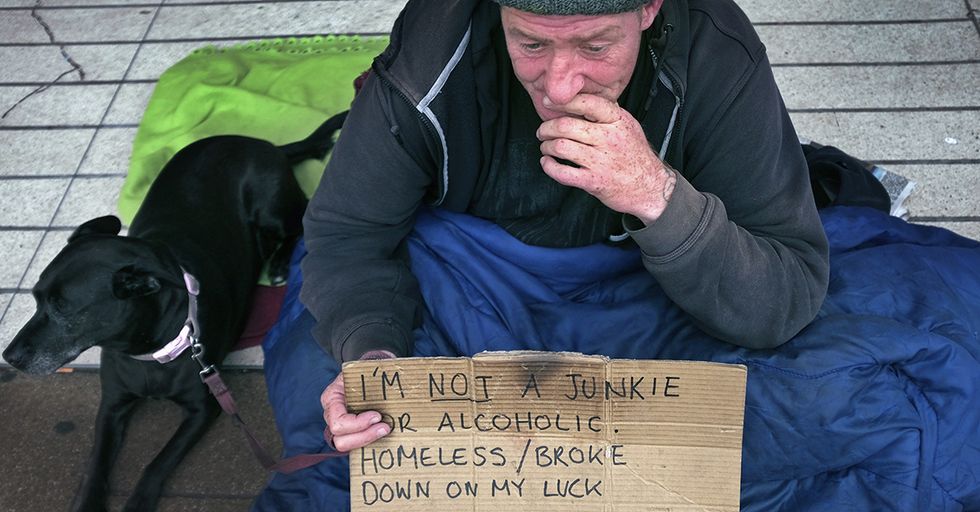 13 Illegal Things People Have Done for the Right Reasons

For the most part, you should probably follow the laws and rules of society. They're there to keep you safe and keep society functioning at least somewhat normally. (Again, for the most part. Some laws are just straight-up bonkers.)

But sometimes, breaking the rules is actually the right thing to do. Such is the case in the following stories which were submitted to a recent AskReddit thread. Get ready to have your faith in humanity 100-percent restored.

I use to work at a CVS. After Halloween, all their candy goes on sale, up to 80 percent off. After 3 weeks though, no one wants candy candy-corn-flavored chocolate or bat-shaped gummies. So they told me to throw it all away. This was about 2 shopping carts worth of candy. None of it was expired or damaged, just out of season. Instead of taking it to the dumpster, I placed it all in the back of my car. The next morning, it all went to the local food drive center. (In all honesty I did keep 2 bags for myself). The food center sent me a thank-you letter saying I donated over 50 lbs of candy.

About 2 months later, I am called into the head office. They have it all on video: me putting the candy in my car. They told me I owed them $500 in damages or they would press charges. I got a lawyer and argued that dumpster diving isn't illegal in my area, which, since I was told to throw it away, this is what I did. In the end I was just fired and banned from the store, charges dropped. – nowhereman136

When I worked at a pet store, I let a homeless man take dog food and dog treats for free because I didn't want his dog to starve. When I left my shift that day, I saw him eating the dog food along with his dog in the parking lot. Seeing that nearly made me break out in tears. – ProbablyStoned0x1A4

I work at Valvoline and we had a customer come in who could barely afford an oil change (even with a 19.99 coupon). Well, after we finished the oil change her battery wouldn't crank. We tested it and it was completely dead. Upon hearing this, she broke down in tears and explained there was no way she could afford a new battery anytime soon. Now, policy dictates that we call a tow truck and have her towed. But we said f**k that and gave her a brand-new battery for free and cleaned her fuel line. The look of gratitude on her face is something I will always remember. – CrossFox42

When I was 11, I used to be friends with a kid who had drug addict parents. He was always hungry because his parents never bought food and spent all their money on drugs.

So, being 11 with no money, I used to steal food from the supermarket on the way to his house whenever I went over there. I'm glad I did it because it meant he got to eat a meal for the day and I'm lucky I was never caught. – Diakia

My grandfather was in the hospital and was very close to dying. I was there for 2 days with him and needed to run home to grab some things and shower, so I drove home as fast as I could so I could get back. On the return trip I was speeding again and got pulled over by a state trooper who was behind me the entire time, apparently (I didn't even see him). When he asked me why I was going so fast I told him what was going on and that I was sorry.

He looked at my last name and said, "Is your grandfather George?" Turns out he knew him — my grandfather was a Fire Chief for 27 years in the town next to the barracks — and told me to get to the hospital. He could have easily given me a ticket, which I deserved...but he let me go. My grandfather ended up passing later that day. – Beer_

I did the illegal thing and the lunch lady used to help. I was in Seminole Middle way back when in Florida and we were really poor. Like, really poor. I used to steal lunch wraps and salad from the health bar during lunch in the cafeteria. The lunch lady knew. There was lunch A–C, all hosted at different times of the day.

She wouldn't charge me until the third lunch, and even then it was next to nothing. I would have a backpack full of wraps and salads that I'd take home and share with my brother. 14 years to this date I have spent every Sunday talking to her at least two hours. She is old now and nobody really visits her. I tend to go see her from time to time, when the opportunity arises. I bring her Thanksgiving dinners and Christmas dinners. Sometimes I cook breakfast for her and I maintain her garden. I take her for walks (she's in a wheelchair). I love her. When she passes away, I'll have lost a mother and a friend. – [deleted Reddit user]

I don't know if this is illegal but I went to the bank thinking that they were still open since the doors were all unlocked. All the lights were off and no one was there. So I called the cops. The cop told me to walk inside to see if someone was there. Nope. But someone left a pair of bank keys on a desk. So, with police consent, I trespassed. An hour later, after I had left and gone to buy lunch, I saw four cop cars stationed outside the bank. I'm hoping that no one got fired for the wrong reason. – freevantage

When I was younger, I used to dabble in the weed biz quite a bit. My dad ran with a bunch of pretty tough bikers so I could get it really cheap. Well, one day my grandma called me out of nowhere. She tells me that she's lost her job and is on the brink of losing her house.

She says to me, "Brad, now I know you got them biker buddies. Will you talk to them and see if they would let me run some of that marijuana for some cash? Who would ever pull over an old lady?" Long story short, I told my guy the story to get a laugh out of him, and he LOVED THE IDEA. That summer, my grandma picked up all of our shipments for us and made enough money to not worry about work and even bought a new car. True story. – R0UNDSD0WNRANGE

I worked at a furniture store in the electronic department. We had a promotion going on where you could get free stuff (really rare) or 10-25% off. All you had to do was scratch the silver stuff off of the scratch tickets we gave out. You could see through the back if you held them up to the light. We checked every ticket for prizes and I found a free $800 surround sound system. I brought the ticket home with the intent on keeping it and using it at another store. The guilt caught up with me that night so I brought it back in and kept it in my pocket.

A week later, a single mother who was down on her luck came in to buy her 10-year-old son a 32" TV for Christmas. One of the cheap $200 brands. I gave her the ticket even though it wasn't my sale and said "I have a good feeling about this one" and traded her tickets. Her son got one hell of a Christmas gift for his PlayStation set up. – busy-at-work

I stole a dog. I went to a friend's house one night and we were hanging out in his front yard. A super friendly dog came up to us. I asked my friend if he knew the dog and he told me the story. It belonged to his neighbors who were kind of scaring everyone else in the neighborhood. They would hit the dog in the streets, it clearly wasn't fed enough, and my friend said when the neighbors would try to get him to come to them he would run away every time. I took him home and within a week you couldn't see his ribs anymore and he was one of the best dogs I've ever had. 10/10 would dognap again. – UncookedMarsupial

I use to work at a thrift store, not a small nonprofit one but those big multi-store for-profit ones. Anyway, we would get homeless people all the time in the store and many of them would be missing shoes or jackets, etc. So whenever they ask if they can have some items for free I just let them walk out the store. Besides, that place is so susceptible to shoplifting, the items might as well go to the people that ask. – mvndres

It was December and I was working in retail. You could spot them a mile off, the grannies and granddads that had saved up their measly pension all year just to buy the grandkids those fancy sneakers or jeans. They would come to the till knowing they had just exactly enough to cover the cost, the look of surprise on their faces when I informed them that that very item was reduced by 40 percent was one that would have warmed the coldest of hearts.

I used my staff discount, I never used it for myself. I did the same for people that were clearly not very well off. I've been in financial trouble myself (still not totally out of the woods yet but definitely on the up) and I know how much of a difference even a few pence can make. – schmople

About 15 years ago I was working at a manufacturing plant. One of the guys on my station had been working there for 4 years as a temp already, while I was hired from temp to full-time in just 6 months. I asked him why he hadn't been moved to full-time by now and he tells me it's because he doesn't have a diploma or GED. He had two kids at the time, and a third child on the way.

So after work one night I brought him to my house, I scanned my own GED, and then Photoshopped his name in place of mine and printed him out about 40 or 50 copies of it in color, not black and white. The whole process took about 2 hours to make sure it looked as perfect as a real GED, and in the end, it did. He took a copy to HR the next morning and told them his mom had finally found his GED and he made a copy of it for them. He was hired on as a full-time employee within two weeks. – Poem_for_your_sprong