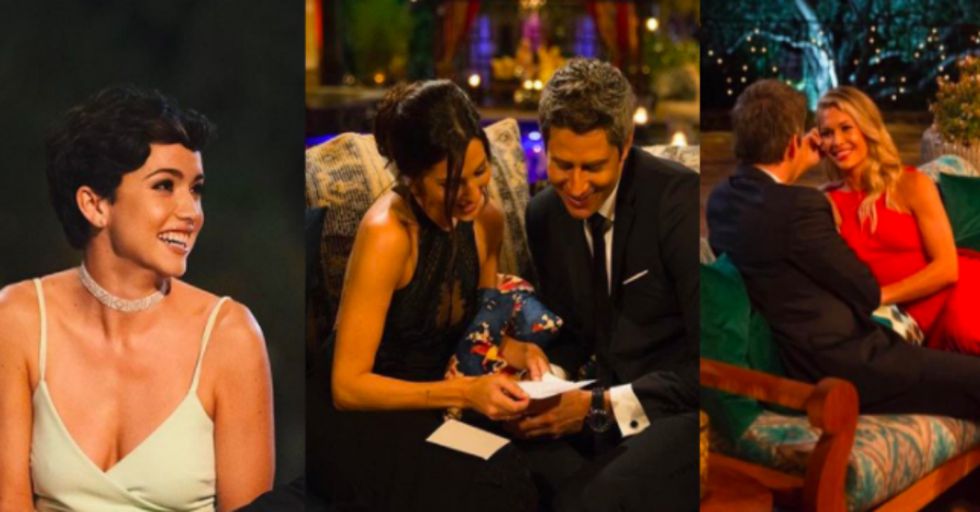 This season of The Bachelor is two episodes underway and I am telling you right now that 27-year-old publicist from Minneapolis, MN, Becca Kufrin, is going to win Arie's heart.

Why is that you ask? Well, I'll tell you.

To start, Arie took Becca to get some new clothes.

What she didn't know was the world-famous stylist and designer, Rachel Zoe, would be there to actually outfit her. Becca, who continues to remind us that she is "just a girl from Minnesota," lost her mind when Arie told her she could take home all the outfits.

I will say that as these fairytale setups go, this one was fun to watch. Becca seemed as genuinely excited to spend time with Arie as she was to be gifted a (hideous) studded pair of Louboutins.

All of that said, did it feel a little too Pretty Woman to anyone else?

I think we can all agree that the best Bach dates consist of things that could happen in the real world but are only augmented by The Bachelor universe. Things that come totally out of left field like unlimited shopping sprees end up just feeling contrived and awkward. Oh, and devised to make the contestant remember how crappy their lives were pre-Bachelor.

Next came Arie's one-on-one with Krystal, the fitness coach from San Diego.

There's always one fitness coach scattered amongst the contestants, but sadly, not all of them can be Peters. Arie takes Krystal on a tradition-eschewing first date to his American hometown of Scottsdale, AZ (he's originally from Holland but when his family came to the States, they settled in Arizona).

Normally, we have to wait until the bitter end to meet our bachelor's family, but for some reason, the producers thought... let's throw a wrench into this season and have him take someone home on a terrible first date. In the second episode.

Okay, producers. I see you. Unfortunately you picked the wrong girl for this excursion. The more Krystal tries to make the date seem normal, the more her soul starts to detach from her body, becoming a simulacrum of humanity. Sorry, Krystal, this is not working.

It's not going well. His mom tells her that marriage is hard work. Uh doy.

After the family gathering, Arie and Krystal magically teleport back to LA for dinner, as one does on this show. It quickly becomes clear that Krystal is about as deep as one of those dolls with a string in the back you pull to hear a catchphrase. I know, you think I'm being mean but even her "Oh my god, this is so hard" moments feel staged. Arie's boredom is palpable, and awkward.

I feel like she has been practicing this sob story speech for years.

"My heart, like... shattered" she croaks. Arie rubs her shoulder the way you might pat an aging grandparent who just told you they prefer creamed corn to creamed spinach.

After the one-on-ones, the girls on the group date are sent to a race track to participate in some demented, life-sized version of bumper cars.

Annalise, the masked kissing bandit from the season premiere, who I wrongly assumed was kind of normal absolutely. loses. her. shit.

Girl, it is BUMPER CARS. And you are on TV. They are not going to let you die. Inevitably she starts sobbing before anyone is even inside of the bumper cars. Worse, she starts to recount the origin of her trauma: a bad bumper car memory from her childhood. Help, I can literally feel myself aging this is going so slowly.

Okay, it's finally time for the rose ceremony. And as it turns out... hooray! The other girls hate Krystal as much as I do.

While I assumed that single mom Chelsea would be the automatic villain of the season, I'm starting to think she has nothing on Krystal, who insisted on barging in on almost everyone else's one-on-one time before the rose ceremony, despite the fact that she already has a rose from her date with Arie in Scottsdale. In other news, Arie finally talks to Sienne, Yale graduate and frontrunner for the annual title of Girl You Are Too Good For This Show Why Are You Here. Yet, while they are talking I make a terrifying discovery. Arie is.... drinking milk out of a wine glass. I wish I could unsee this, but.... it's too late. It's been seen. And now I know the awful truth. They are all too good for him. Until next week, friends. Time to go be the Michael Jordan of naps.