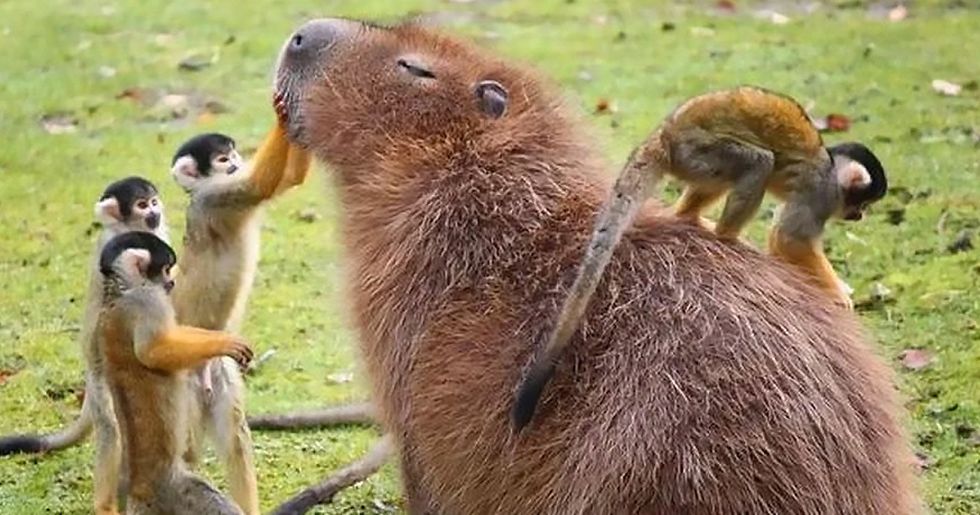 Images so Delightful They Must've Been Blessed

Pictures are never just static — every photograph we see is imbued with some kind of emotion. Think of how you feel when you look at a picture of your dad at your college graduation, or a body-builder eating an ice cream cone, or a dog wearing a Halloween costume, or your old childhood dentist. Be they positive or negative or even confusing, those photos will bring about some change in you, and that change is caused by the energy imbued in each and every photo.

But some photos are so powerfully emotional — making us so upset or, in the case of the images we've put together here today, so happy — that there has to be some other force at work. Something supernatural. Something has blessed these images and made them powerful vessels of joyful feelings.

So check out these sweet images, and let yourself be swallowed up in the happy that they bring.

You tried to be sexual, and you got played.

First of all, why are we getting internet prompts to draw Nintendo characters in this bizarre sex-hoodie? But second, god bless whoever decided to drape it on a happy little Kirby.

So you're just gonna scroll past without saying bonjour? - godos081

Hamilton is a great name for this specific Charmander! He just has the air of a Hamilton about him. It's a dignified, but also fiery, name.

They call this a "ride-along."

My girl wanted a piggyback picture on the beach and a random biker watching said he wanted one too. - mactratov

You have the right to remain adorable.

Thinking about how the Dutch police arrested a bird for taking part in a robbery, put it in a jail cell with bread and water and when the media reported on it they put a little black bar over the face to protect its identity. - DropInTheOcean1247

Peeling oranges... my one weakness...

My cat found an unattended cracker and brought it to me so I could hold it for her while she eats it. - Coolcattosuwu

We all got together and signed this card for you, Matt.

Matt will leave soon and probably will not come back. This is your chance to say "Hello Matt." - BrickBusterGG

Once is not enough.

This is Jared. You will see him once and never again. Say hi to Jared. - PikminWarlord

This is what we'll all look like if it ever starts to rain syrup.

Adam made a big move, and it looks like it paid off. We should all be more like Adam, in that we should all buy billboards. (I assume the billboard industry, like all forms of print media, is dying).

My pet Tortoise. I hope this made at least one person happy. - WonkierCarter1235

Love can blossom from the most unlikely of places.

I think someone has a crush on my Christmas light decoration. - ChaosDemonLaz3r

Aww, it's so haunting!

And I looked, and behold, a pale horse. And the rider's name was death. - WinderAura

Listen, this dog is, objectively, round. And since "(circle)" was an option, this round dog was birthed into existence. It's a beautiful story.

We appreciate this guy taking the time.

Elderly YouTuber writes his subscribers down in a notebook, then thanks them individually. - @mashable

One of Mario's oldest enemies is also one of his most perfect enemies.

He has undergone ZERO design changes since Yoshi's Story. This is because he is without flaw. - eyemareetarrd

This tiny Lapras grants you luck x5 as you boop her! That's all! She hopes you drink lots of water today. - TheTrashMan18

A perfect example of building a brand.

I've been informed that the meme cat is named Smudge and has an extensive history of being a goblin. - beardedbard_

"Did you eat my leftover pizza bro?"

I think this hedgehog is angry at me... - @FilmsGio

Capybaras: a friend to all.

What's up with capybaras chilling with other animals? - Master1718

Moms finding out the cute things they can do with technology is a reminder that we are truly living in blessed times.

This was right to do.

When you go on a journey, you never know what treasures you'll find.

This is sure to come in handy.

It's dangerous to go alone, take this. - Fallenbirb

It's the most spookiest time of the year.

"Tune in tonight at 8, and at all other times."

In Italy now we have a whole channel dedicated to Shrek. Just came here to tell you. - LAYNEsAWESOME

Rats can be taught to play hide and see — and they squeal with joy when they win, scientists have found. - ismackmydad

The headline: "A Terminally Ill Rescue Dog Became a Police K-9 For A Day"

Cops in Washington made the dog a bucket list to make the most of the time he has left. - Paradigmfusion

This family's back to school pic. - Hydration_Nation

Oh my god, I have to say hi right now.

Please say hi to my doggo or else he will cry :( - WeebSenseii

Many experts call it the most haunted location in the entire apartment.

Accidentally washed a piece of Halloween confetti down the sink and I'm afraid to say the plughole is now very haunted. - iliketrains123321

In 2018, two conjoined twin sisters were born attached at the stomach, and doctors said they likely wouldn't survive unless they were separated. The parents couldn't afford to pay for the surgery, so the surgeons did it for free. - anime-vintage

"We have guests, go get the fancy cups." - thecoolguyman

I wonder if their howl is also small and cute?

This dog is a Swedish Vallhund. They're basically WOLF-CORGIS. - Arnox121

Why don't schools teach us that?

Today in art class our teacher was absent and our substitute was one of the animators on Courage the Cowardly Dog. - JayPlaysBeamNG

You got it, snek.

Aw, look at this bumper sticker I got in Arkansas. - darklytheyoinkman

A battle of wills.

You can't deny that whoever stole that purple marker, criminal though they may be, knows who they are and what's important to them.

For just pennies a day, you can help end canine tongue-overlapidus.

This is our dog. He has overlapping tongue. - welikefortnitew

And it will stay long, for no one could ever want to hurt him.

His health bar is enormous. - Bmchris44

He wouldn't bust a grape in a fruit fight (because they're on the same side).

Good advice, this is.

Yessir, even the rootin-est, tootin-est cowboy needs to abide these rules, because if'n they don't? They're gonna lose theyselves some gol' dang friends!

I'm also afraid of the washing machine, ever since it ruined my favorite turtleneck.

Found my dog curled up. I think he's scared of the washing machine. - supernova61310

"Is that a Jedi over by the lat pulldown machine?"

This guy dresses up in costume at the gym to take the attention away from his overweight friend who was embarrassed to go to the gym... - BriByDayAndNight

Look at this happy little guy, all ready to get eaten.

Truly, this is a blessed uncrustable. - somethinge44

He won because he looked the nicest.

I work in animation with some of the best artists I've ever met and this is the pumpkin that won our carving contest the other day. - MooxBoi

And hello to you too, sir.

This little guy jumped onto our boat, strolled into the cabin, and made himself at home on the couch. - Master1718

These are not the Smash Bros. you were looking for.

Kirby done turned to the dark side. - xXRTLnightzXx

This is a dog living his best life.

What I especially love about this blessed image is that it's so non-descript — this little dog could be doing anything. Relaxing, meditating, going "Duuude, sweeet" — anything!

Hey now, you're an all-star.

Bruh I was at the mall and found this in an actual jewelry store. It's a shreklace. - YouTakeTheM00n

Even sweethearts can go to Hades.

Cerberus as a puppy, guarding the gates to heck. - gyurov

So anyway, I started blasting. - microwave9000

Thank you, Bob Ross-looking friend, for doing your part.

After a year of telling my friend he looks like Bob Ross, he finally sends me this photo. - Din_Gurevich

I think this is an authentic Banksy.

Why are you doing this to me? - Discord_LxiBot

This is the rusty-spotted cat, the smallest cat species in the world. You are now blessed with the knowledge of a cat that can literally fit in your hand. - ToastyWaffle808

I think the best thing you can do with animals is have them wear hats specifically designed as gag gifts for middle-aged dads.