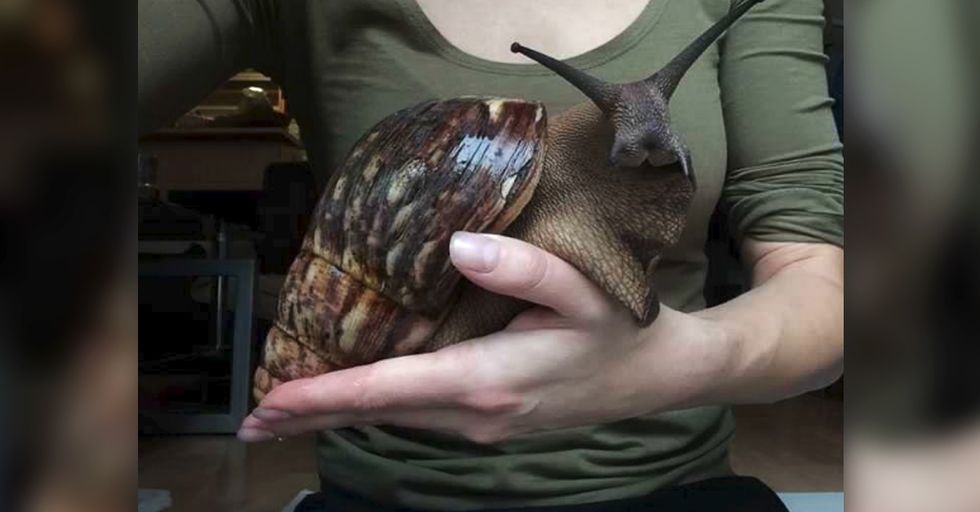 19 Images That Prove You Should Never Mess Around With Nature

Wherever you are right now, chances are you're relatively comfortable. Maybe you're inside an air-conditioned room (or a heated one if it's still cold outside).

You're probably surrounded by four walls that protect you from the elements. And you're holding a supercomputer that can access the Internet. You've got it made in the shade, friend.

But before you get too comfortable, I'd like to show you some images that prove that as long as you're living on this planet, you probably shouldn't be completely relaxed because Mother Nature has some serious tricks up her sleeve.

Like this giant snail, for instance. Did you know snails could be the size of a small cat? 'Cause it's true!

Also, check out this preserved blue whale heart. Even though you know blue whales are gigantic, seeing one of their hearts like this really puts things into perspective.

See that? That's a shark egg. Yeah, it's translucent. Does that skeeve you out a little bit? Good. It should.

No, this isn't a prop from the latest Alien film. It's Clathrus archeri — a fungus that actually manages to smell worse than it looks, if you can believe that.
Even birds aren't safe, and those guys can fly. Look at this snake just chilling on a telephone wire! No thank you. And speaking of animals in places where they don't belong...
Remember how we just covered that birds can fly? Well, this bird (a cormorant) has instead chosen to dive underwater in order to pluck a remora off the skin of a whale shark.
And these camels are swimming in the ocean! Is your mind blown? 'Cause my mind is completely blown right now.

Just when you think you can escape from the dangers of nature, something like this happens. Welcome to your new commute — into Mordor.
You might be thinking this is just another video of a person driving in the dark. But it's not. It's actually proof that Thor is real.
Did you know cuttlefish can make designs like these dance across their skin? They use this skill to lure prey and kind of hypnotize them before they attack. That's not even the most worrisome thing cuttlefish can do...
They can also disguise themselves to look exactly like other animals. Like this one, which looks identical to a hermit crab. Here's another animal that's a master of disguise:
Be honest: How long did you think that was just a wooden pole? Probably longer than you'd care to admit. Humans may have invented spaceships and gone to the Moon, but nature will always have us beat.

Oh, this? This is just a dragonfly eating the bottom half of a wasp... ...While the top half of the wasp drifts around aimlessly. Nature, you scary.

Quick show of hands: Who here knew that seashells could move? Who knew they could move this quickly? And why did none of you warn me?

I had no idea that spiders ever used their webs in this way. I was already pretty afraid of spiders, but that fear has just been taken to a whole 'nother level. Now let's talk about goats...

Gravity? These goats don't give a rip about the laws of gravity. They'll stand on the flat side of a mountain, thank you very much.

This little guy is an Axolotl. They can completely regenerate limbs and organs without any scarring. You can completely remove a segment of its spinal cord and it will just regrow, no problem. They're also 1,000 times more resistant to cancer than mammals. Nature is playing tricks on itself with this one.

Oh, were you thinking that puffins were cute, pudgy birds who just want to hang out with you and be your best friend? Yeah. Tell that to those fish.
This fish is clearly having an even worse day, though. I had never seen anything like this before, and I think I'd be happy to never see anything like it again, thanks.