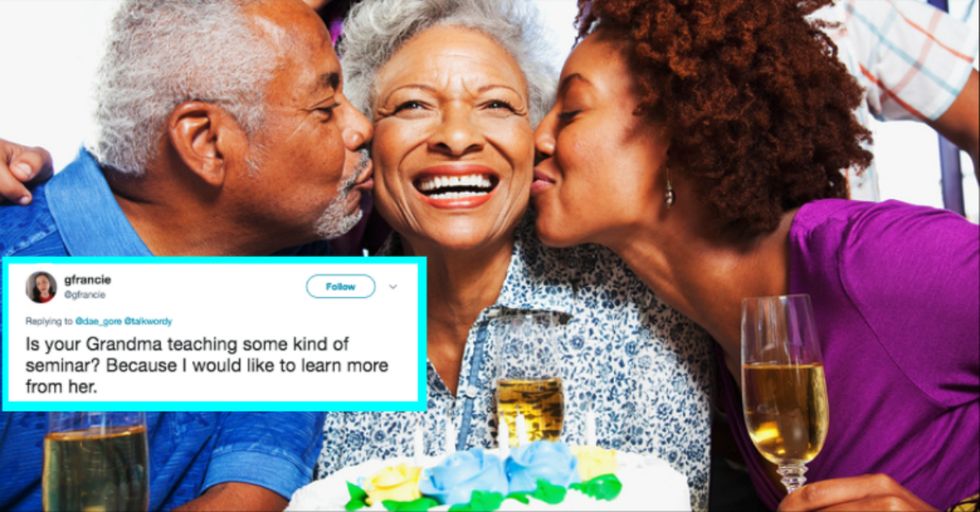 As you go through life, you learn that there are some things you do to make your life easier. When the garbage can is full, take it out. When the dishes are dirty, wash them. And when it's your grandma's birthday, you sure as heck better call her.

Twitter user @dae_gore learned the hard way what happens when you don't.

It was a day like any other day, except for one very, very important thing.

It was Dae's grandma's birthday. But Dae made the fatal error of not calling his grandma to wish her a happy birthday.

That's when he received this text:

"Happy birthday to myself hadn't heard from my grandson thanks," she wrote to him. Ouch. That's gotta hurt. But wait just one second. What does that timestamp say?

Are you kidding me, grandma?! Now, you should absolutely call your grandma on your birthday. That's non-negotiable. On the other hand, 7 a.m. is maybe just a touch too early for the ultimate passive-aggressive text seen here.

Dae posted his grandma's text to Twitter where it quickly went viral. People got a real kick out of this grandma's ultra pettiness.

She may have been hoping to wake up to a slew of birthday texts from her beloved family members. But everyone knows that you can't wake up earlier than your grandma. I'm pretty sure that's how black holes are formed.

Of course, to Dae's grandma, the day had begun long ago. This petty text wasn't the end of the exchange, though. Dae called her back and then posted the following update...

Ouch. Is this how you get disowned? I'm pretty sure this might be how people get disowned.

A few people commiserated with Dae about their passive aggressive grandmothers. Like this person, who got the following text from their grandma around the holidays:

"Thank you for the Christmas box that you didn't send thanks again." I'm not sure anyone would be able to recover from that one.

Finally, Dae managed to get ahold of his grandma and fulfill his duty by wishing her happy birthday.

She pretended not to know who was calling until Dae offered to take her out for dinner. This woman has been around for long enough to know how to get exactly what she wants, and you've gotta admire her for it.
May we all learn this very important lesson from Dae's experience: On Grandma's birthday, there is no such thing as "too early" to call or text. In fact, the earlier the better. Maybe you should go ahead and set an alarm.

And while we can certainly learn from Dae's mistake, it's obvious that Dae's grandma can teach us a lot, too.

When you're the matriarch of the family, it's never too early to bring out the passive-aggressive messages. Feel like being petty? Go for it. You've earned it.