In This Newly Uncovered Video, Donald Trump Brags About Hiring a Hot Teenager with No Experience to Work as a Waitress | 22 Words 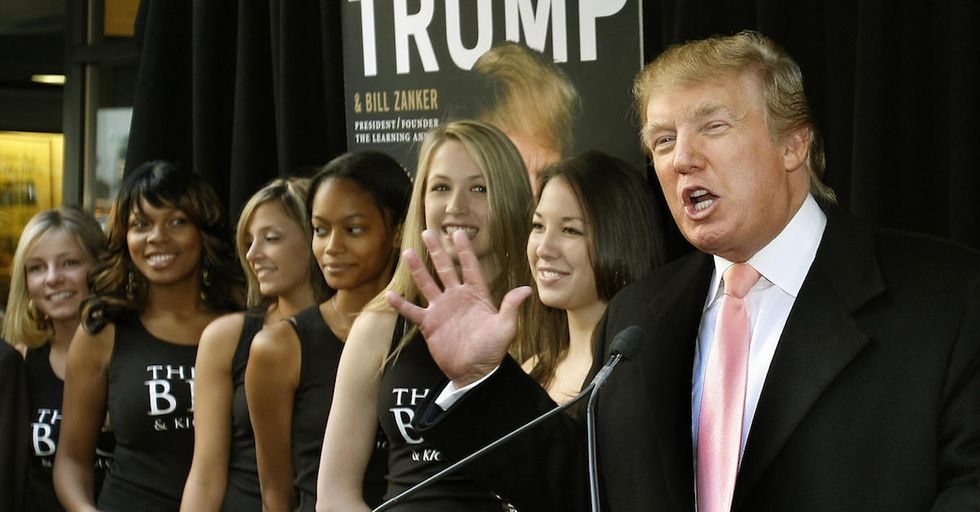 In This Newly Uncovered Video, Donald Trump Brags About Hiring a Hot Teenager with No Experience to Work as a Waitress

Anne Victoria Clark
Real estate developer Donald J. Trump holds up a copy of his new book written with Bill Zanker, president and founder of The Learning Annex, called ""Think Big and Kick Ass" outside Barnes & Noble on 5th Avenue in New York 16 October 2007. Trump formally addressed the assembled crowd and press outside the store about his philosophy before signing books for fans. AFP PHOTO/ TIMOTHY A. CLARY (Photo credit should read TIMOTHY A. CLARY/AFP/Getty Images)

Before he was a famous reality television star, Donald Trump was known for having money and cheating on his wives. Oh, and the hair.

Now, in the weeks after the watershed Harvey Weinstein sexual assault accusations, it was only a matter of time before someone found a clip of Donald Trump doing something similarly repulsive. In this newly uncovered video from 2007, Trump invites a woman up on stage with him at the Learning Annex and then jokes about offering her a job.

See it for yourself, below.

Donald Trump, President of the United States, has a long history of being inappropriate with women.

Before he was elected to the highest office in our country's political system, he was caught on tape by Access Hollywood bragging about how aggressively he pursued beautiful women. Despite being married at the time.

In the wake of the Harvey Weinstein allegations, Republicans are demanding Democrats who accepted campaign money and donations from Weinstein return the money.

Of course, this strikes many as bizarre, considering Trump was featured in multiple recordings bragging about his own sexual assaults ranging from barging into dressing rooms during beauty pageants he owned, to simply grabbing women and getting away with it.

It seems like the common thread here isn't politics.

It's more about powerful men with bad ideas being allowed to do whatever they want. Especially if that man is your boss. It's frightening to accuse the person who controls your livelihood and salary.

In this very low place, it's difficult for anyone to find the high road.

But that doesn't mean that we can't still call out inappropriate behavior when we see it.

People are still trying to drive home the point that Donald Trump is a confessed sexual predator. This video, posted by Now This, shows him engaging in disgusting behavior that surprises no one.

Unearthed footage shows Donald Trump squeezing and kissing a woman while talking about offering a job to a 'beautif… https://t.co/kOYXmS1Ni3
— NowThis (@NowThis)1508095982.0

In it, a woman asks about becoming a flight attendant on one of his jets. Noticing her looks, Donald immediately invites her up on stage for the purposes of... putting his arm around her? It's not clear if this is his interview process, but he does pretty quickly announce she's hired. But that wasn't all...

In reality, being a flight attendant is a pretty serious job.

Finally after 8 weeks, I have my wings that I've worked so hard for. Proud to call myself a Delta flight attendant… https://t.co/eFSa55pgdT
— Amanda Pietrzak (@Amanda Pietrzak)1492198901.0

It's a job that requires lots of training, and one in which you're responsible for the safety of the passengers on board. There are numerous physical requirements that go way beyond looks, due to the fact that you have to be able to help get passengers to safety in case of emergency, work in coordination with your flight crew, and understand protocols.

So clearly he isn't hiring this woman for her stellar safety record.

And at the end of the video, he even talks about how hiring her would be a "death wish" for him. He says that for him, sex with women is like alcohol to an alcoholic. Yikes.

This is something he's literally famous for.

So when he also talks about hiring a "17 or 18 year old" girl to work in one of his establishments, despite the fact she had no experience, it was a level of gross that everyone was pretty used to.

It's definitely the kind of thing only Trump seems able to get away with.

Because obviously anything this man does, by virtue of his having done it, is fine in the eyes of his die-hard, unquestioning supporters. Of course, his predecessor did also make some waves by wearing a tan suit once.

Don't get us wrong, Donald gets some guff for his suit choices too.

@nowthisnews @mgobluegirl6 Doe he only own one suit? With that kind of money I'd have at least 2. And some casual shit for weekends.
— Coldhands (@Coldhands)1508111832.0

Of course, these kinds of critiques seem like small potatoes compared to whatever happens whenever he opens his mouth. Which is always, the man does not stop talking. Even if he doesn't know what he's talking about. But of course, he still has his defenders.

There's always at least one.

But this does remind us of one thing: Donald Trump is not a politician. He's a man who holds the highest political office, with no political experience. If you hired someone for a really important job with no experience at all, it'd be pretty ridiculous to then complain he's bad at it.