In Today's Saddest News, Prince George of Cambridge Isn't Allowed to Have a Best Friend | 22 Words 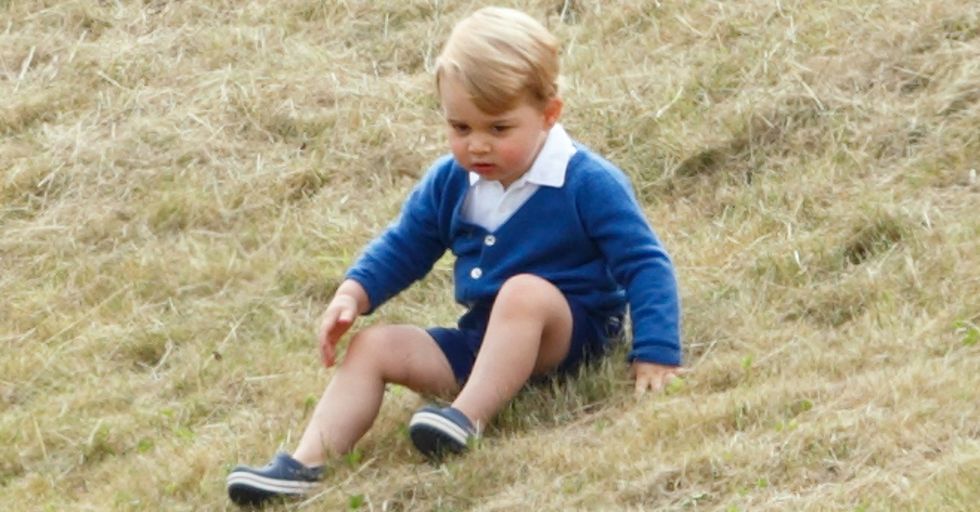 In Today's Saddest News, Prince George of Cambridge Isn't Allowed to Have a Best Friend

What would it be like to grow up without a best friend?

Prince George may have to forego all of that because of his private school's policy.

Granted, we don't think he'll need to set up lemonade stands any time soon, but if he did, we're sure they would be a hit.

Prince George's parents, Duchess Kate Middleton and Prince William, put a lot of thought into where George would go to school. George's father and grandfather both went to Wetherby pre-prep, an all-boys school in Pembridge, London. Many royal or upper class families put their sons in all-boys schools, but Kate and William didn't stick to tradition.

Other royals have attended schools like Gordonstoun, which is known for being strict and tough on its students.

But instead of those options, George is now attending a co-ed private school called Thomas Battersea. According to Telegraph, a royal spokesperson said, "Their Royal Highnesses are delighted to have found a school where they are confident George will have a happy and successful start to his education."

The holistic school, which costs $24,000 a year, hopes that their students will learn to give more than they take.

The school's mission statement says, "...We aim to offer the highest academic standards, set within a broad and rich curriculum, which inspires enjoyment, learning and achievement. We expect every member of the schools’ communities to ‘Be Kind’." Despite this, they don't want Prince George to have a best friend. Yes, you read that right.

They don't want anyone to have a best friend, to be exact.

The headmaster has talked about wanting kids to have "lots of good friends" instead of just one best friend. They don't want anyone to say they are closer to one student more than another. Jane Moore told the New York Post, "There are signs everywhere saying be kind, that’s the ethos of the school. They don’t encourage you to have best friends."

If a student wants to have a birthday party, they are required to invite everyone in their class, for fear of leaving someone out.

According to school officials, the school aims to make all students feel included. How would you feel about being required to invite everyone in your kid's class over for a birthday party? Would that be a hassle, or do you think it's the right thing to do? We're all for kindness and including others, but we think it's okay for your kids to have a best friend as long as they are kind to all their classmates. Prince George's time at school had been relatively normal, until last week...

First, someone tried to break into the school. A 40 year-old woman was caught breaking into the school where little Prince George studies (if you can call pre-school studying). Authorities said that they took extra precautions to make sure the school was safe prior to George's arrival, but somehow this lady slipped through the cracks.

Apparently the woman was caught while on school premises, but thankfully hadn't made contact with any students.

Officials detained her for 24 hours after the incident, and suspected her of attempted burglary. They took the woman to a police station in south London. While it's possible the woman could have had benign intentions, it is still frightening to think that she was able to walk the school freely without a pass.

According to The Telegraph, another woman complained a month prior that the gates to the school were wide open, allowing her - or anyone - to walk freely onto the campus without being screened first.

Even at schools where there is not a royal student attending, adults are usually not allowed on campus, for fear of children's safety. A Scotland Yard spokesperson said, "We are working with the school, which is attended by His Royal Highness Prince George, to review its security arrangements after the incident."

The second thing out of the ordinary was that little Prince George started bullying other students on behalf of his royal status!

Just kidding, sweet Prince George didn't really bully anyone at school. But there was a rumor going around that he did, because of a satire article posted by Pagez.

The article said that George has been "throwing royalty around like Mike Tyson threw punches."

The article said that little George rules the school and demands to go by "Georgie-P", all while stealing milk and calling names. The article quoted a faux-parent about George's alleged actions: “My child Delilah-Tulip was accosted by George who threatened her saying something along the lines of ‘Do you know who I am, treacle?’, he stole her hand milked organic dairy. Staff offered her more, but he threatened them and took that too." That wasn't all of it, though...

Even though the article was satire, people believed it and loved him more for it.

People are even saying they will use the phrase, "Do you know who I am, treacle?" in honor of Prince George, when they deem fit. "Treacle" is a British term for molasses, but colloquially means "sweetie" or "sweetheart."

For example, if you are trying to get tickets to a sold out show, or if you get pulled over for a speeding ticket, you can say, "Do you know who I am, treacle?" and see if it helps your cause.

It might actually work for Prince George if he tried it, but unfortunately, it may not work so well for the rest of us peasants.

So, rumors aside, we've got our fingers crossed that Prince George will have lots of friends at school and maybe even a best friend later down the road.

It seems that the only issue George has is that he doesn't realize that he'll have to keep going to school every day. You'll get the hang of it, little George! We believe in you!