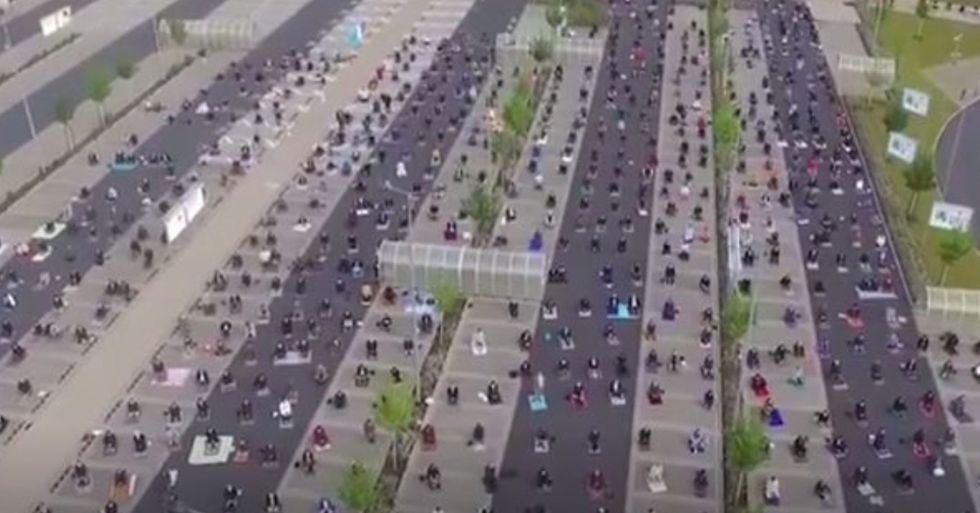 Social distancing has been one of the hardest parts about the lockdown, not being able to see family, friends, or practice in places of worship.

And as Eid came and went this weekend, celebrations were put on hold, but one chairman from a mosque in Germany came up with the most ingenious plan...

Keep scrolling for the heartwarming pictures...

After Ramadan was marked by lockdowns and social distancing...

Muslims around the world have celebrated Eid al-Fitr.

The "festival of the breaking of the fast" is one of Islam's two major holidays.

It begins when the moon rises on the final day of Ramadan, a holy month of fasting.

Traditionally, whole communities turn out to attend Eid prayers at their local mosques.

But with many countries still under virus restrictions, Eid looked very different this year.

As the start of the festival depends on the sighting of the new moon, the first day of Eid varies between countries.

Eid Mubarak! This festival is an expression of love, fraternity, peace & harmony. Eid reaffirms our belief in shari… https://t.co/BW3uXizaZ4
— President of India (@President of India)1590371594.0

Muslims gather with loved ones to pray, share meals, and exchange gifts.

But celebrations have been muted this year as authorities around the world due to the pandemic.

Second, everyone must remember to observe the SOPs in place for COVID19. The disease is with us & social distancing… https://t.co/PmsZ3XuZrK
— Imran Khan (@Imran Khan)1590254620.0

In some countries, strict lockdowns still remain in place.

Many mosques remain closed, even in countries where lockdowns have begun to loosen up.

Some mosques in Malaysia have reopened allowing families to meet.

The Great Empty The Jama Masjid has never been so empty ever before in history. Though situated in such a high dens… https://t.co/6pqktuHR7p
— Sohaib Ilyas (@Sohaib Ilyas)1590302260.0

But congregations are limited to 30 people and social gatherings limited to 20.

One Mosque in Germany came up with the most ingenious idea...

An Ikea store near Frankfurt handed over its car park to a local mosque for socially-distanced mass prayers and people all over social media were in awe.

Around 800 Muslims turned up to pray in the large outdoor space.

To mark the end of the holy month of Ramadan this Sunday.

"The closing prayer with all Muslims in Wetzlar was like a reward for us," the mosque's chairman said.

While places of worship have reopened in Germany there are still strict rules in place that everyone must follow.

The pictures that surfaced have been shared over 12,000 times.

Many users complimented the mosque for finding a safe way for the community to pray together.

Accommodating the local community in their time of need.

He assumed he would get turned away.

"But the store manager didn't hesitate for a second and said 'yes, you can pray'. I was surprised and happy at the same time," Mr. Terzi explained.

Worshippers were invited to bring their prayers mats and face masks to the Ikea car park.

But reminded them that children under twelve should be left at home and people must remain apart.

The viral video shows hundreds of people lying down their prayer mats at a distance from each other.

The people wearing masks performed their prayers and listened to a sermon by the imam.

Mr. Terzi said the prayer was particularly important because many worshippers felt isolated during Ramadan.

The month of fasting is usually a busy time when families and communities gather nightly but it has been difficult due to restrictions.

The chance to pray together was very valuable.

"It was a completely different Ramadan month, without contacts, without visits and without breaking the fast together," he explained.

The decision was praised widely on social media.

@AbdirahimS In a world often bursting with hate, THIS is a heartwarming day brightener spreading lovingkindness out… https://t.co/9FTCGjXaxR
— Adelaide (@Adelaide)1590435914.0

Canadian journalist Carly Agro said: "This is the love and kindness the world needs right now".

@AbdirahimS @MarwaBalkar What a beautiful and uplifting photo. Not just for the devotion and discipline, but also f… https://t.co/jHPAuKXd9C
— kj (@kj)1590374885.0

"What a lovely gesture. A true sign of hope in these difficult times," wrote a Twitter user. While another added: "This is what finding solutions together and staying by each other through this crisis can look like!"

Eid Mubarak all✨ Especially to this Ikea branch in Germany. Local Muslims asked if they can use the car park for… https://t.co/7zTSPc4a29
— Abdirahim Saeed (@Abdirahim Saeed)1590334476.0

Keep scrolling to find out why one priest has become a meme...