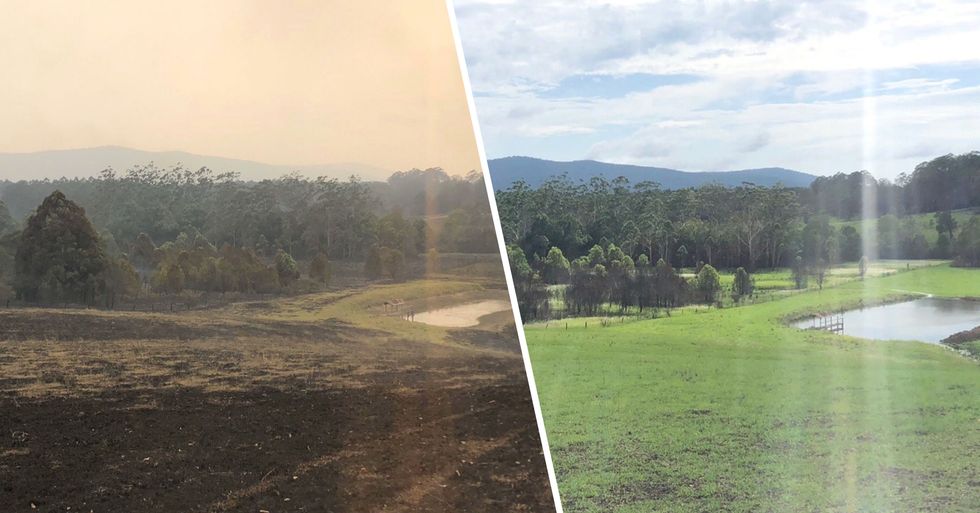 But we recently heard that a huge "rain bomb" was set to hit the drought-ridden country and it looks like we finally have some good news!

Now, shocking before and after images have shown what a huge difference this rainfall has made.

It showed a prediction of heavy downpours of rain over New South Wales and Victoria in the following days.

And, sure enough, the rain began falling!

According to Daily Mail, downpours have already helped to extinguish thirty-two bushfires in New South Wales "as the number of blazes fell from 120 to 88 on Thursday morning." And, even better, heavy downpours followed for most of NSW.

This rain was a true blessing to the country...

It was warned that the predicted heavy down-pours could cause landslides, which could result in an equal amount of devastation.

The weather predictions were studied heavily...

And now some shocking images following the rainfall have surfaced.

They came from Aussie actor Russell Crowe, who had posted in the past about the devastation the fires had caused his home.

But all was not lost.

These satellite pics show the dangerous levels of smoke in the air during the height of the fires.

After just a few days of rain, the levels of smoke and pollution in the atmosphere have hugely dropped.

Returning to his rural property just ten weeks after the destruction of the fires, he shared a shocking before and after image.

But now, it's looking rather different.

"My place 10 weeks ago after the fire had gone through, and this morning after a big weekend of rain," he captioned the amazing shot. Want to see a different kind of before and after shot? Scroll on for the shocking images that really depict the devastations of the bushfires.