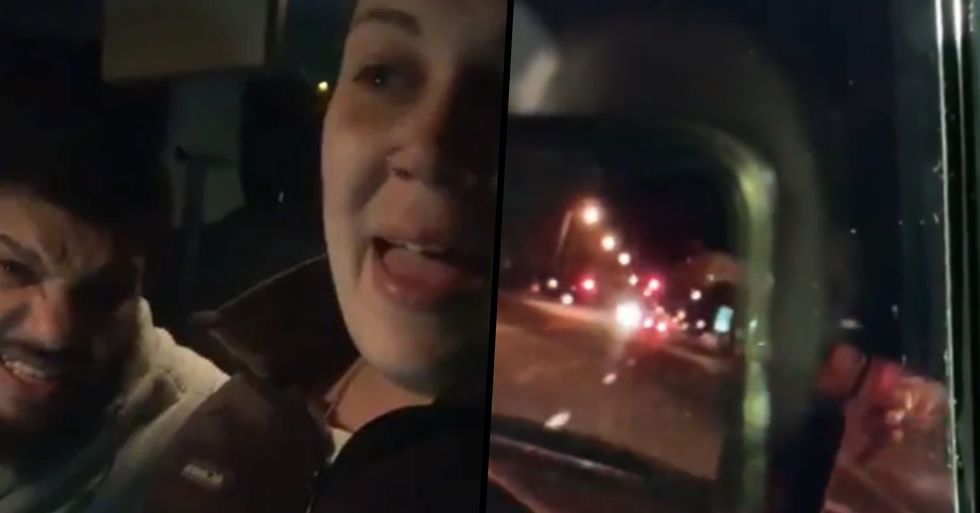 This week, our country was horrified when news came in of the kidnapping of the Massachusetts school girl, Charlotte Moccia.

Luckily, the youngster was found unharmed hours later... But it's all with thanks to one couple who, after spotting the car of the kidnapper, went on to pursue him in a high-speed car chase.

Keep scrolling for the full story, and to watch the dramatic footage of the incident for yourself.

It's been a terrifying week in Massachusetts.

On Wednesday, January 15th, an eleven-year-old schoolgirl was abducted in broad day-light.

It was a completely random attack.

Charlotte Moccia, a student at the Hampden Charter School of Science, was abducted as she got off the school bus.

The abduction happened at around 1:30 in the afternoon...

The schoolgirl was walking towards her home in Springfield when she was approached by a dark blue Honda.

She was then forced into the back of the car.

All while stunned onlookers watched on. "He just grabbed her and threw her in the back seat," Maggie Kenney, a neighbor, told Boston ABC affiliate WCVB. "He was screaming. She was saying, 'Stop, put me down, stop, put me down.'"

Her abductor was allegedly armed...

And apparently used a knife and threats to kill the young girl, who was still in her school uniform, according to his arrest warrant.

Charlotte was missing for a total of 6 hours...

And the authorities spent the full day desperately searching for the young girl, even going as far as to issue an Amber Alert.

This photo of a blue Honda was taken yesterday in the same area of Springfield where the abduction of CHARLOTTE MOC… https://t.co/hcWR6LgIYF
— Mass State Police (@Mass State Police)1579133093.0

Police began receiving several reports from motorists on the Massachusetts Turnpike of a car matching the description of the one which had taken Charlotte hours earlier.

And, upon pulling over the suspected car, they discovered Charlotte in the back seat and a twenty-four-year-old male behind the wheel.

The man was arrested at the scene...

And Charlotte was taken to hospital for an evaluation where, thankfully, she was found to have no injuries.

Rodriguez has a history of mental health issues.

According to his family, the resident of Springfield has suffered from both schizophrenia and paranoia.

It's a complete miracle that Charlotte escaped unhurt.

And it's all thanks to the assistance and bravery of one couple that she was found so soon.

And, after hearing the news about Charlotte earlier that day, decided to take note of the registration plate and contact the police.

Amanda recalled having a "funny feeling" about the car...

She took to Facebook to recall the moment she spotted the incriminating vehicle, "...When he hopped the curb and our beams of light hit his window I saw a mad man... I mean his eyes were scary he quickly put his hood back on and then my eyes were not playing tricks I was 100% sure someone was being pushed down in the back seat I saw so much moving around I thought there were two people in that back seat... we still were uneasy about the man not fitting the description but when your gut is screaming at you."

And, while on the phone to the operator, embarked upon a dramatic car-chase.

It makes for some tense viewing...

As the chase continues, Amanda is clearly feeling the pressure for police to come to the rescue.

Yet, despite the driver's efforts to escape...

The police were able to catch up with him... And it's all thanks to Amanda and Bobby's valiant efforts to chase him and keep him within their sights.

And, upon the news of the man's capture...

A visibly emotional Amanda took to Facebook to express her joy. "We just got a message, saying that they think they pulled over the car. And, if they did... I hope that they did. We can't be more happy enough [sic] that they did." At this, she started crying.

You can watch the dramatic car chase here...

Amanda captioned the video: "Some of the video sorry for dramaticness [sic] but when I saw the person in the back seat being pushed down all we could think about is her and the danger she was in wasn’t even sure if it was the right car just the gut feeling my husband and i had by the rims and the funny movements in the car."

And now, since the incident...

Amanda has reached out to the dispatcher, who did an amazing job at keeping the couple calm and collected during the high-speed chase. "Shout to Jackie the 911 dispatcher she was amazing through my husband and I screaming she calmed us down and handled business she was in point. She even called us later to let us know the plates we gave caught him. Thank you Jackie."

The dispatcher Jacqueline Gerry posted on Facebook: 'Wasn't sure what my purpose was when I came to work today ... now I know. Amanda Disley, you and your husband were incredible and from our dispatch family to you ... THANK YOU!' For another incredible story on a narrow kidnapping escape, keep scrolling to read about the girl whose life was saved by a single text message...