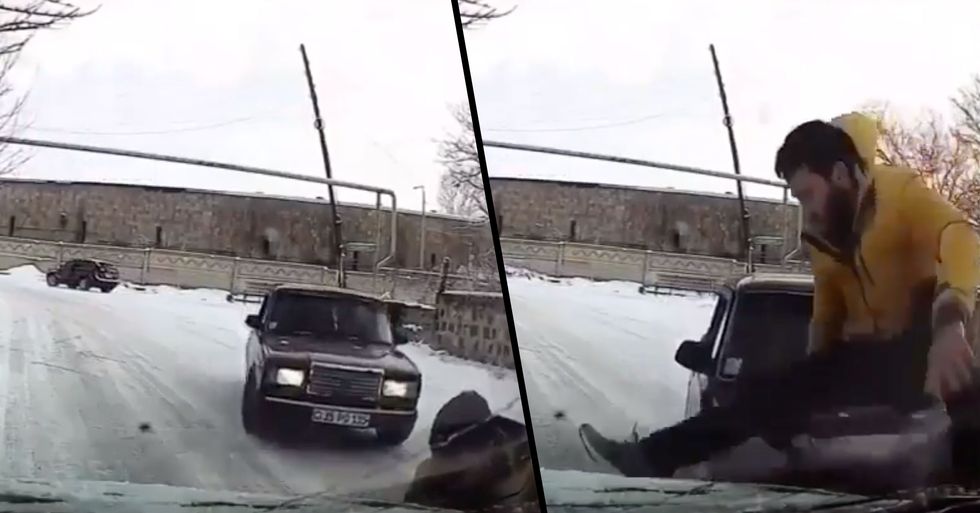 There's something about a near miss that just makes us feel alive! And one that's gone viral this week might be one the best yet. A freezing street, a skidding car, and a poorly placed man sounds like a recipe for disaster, but what actually happens makes for some pretty relieving (not to mention entertaining) viewing. Scroll on for the video that's got the whole internet talking.

There's something thrilling about a near miss.

Flirting with danger but facing none of the consequences is the best of both worlds, in a way.

Nothing like nearly being smacked with a ball to get your heart pumping - but with none of the pain.

But the scariest near-miss of all?

Well, that would have to be any involving a vehicle - because the stakes are just that little bit too high.

And that's what makes the relief so palpable.

And one particular near-miss really shocked the internet this week.

Which has a surprisingly huge appetite for these sorts of videos - who knew?

We're a weird bunch - humans, that is.

But there was one video in particular which captured the internet's attention.

It opens on a snowy scene.

And anyone's who's driven a car will tell you, this makes for a pretty treacherous roadway.

And the cars seem to be pretty out of control.

Taking the corner on the snowy road seems a particularly skiddy spot.

First, a bigger car goes past.

We wince in anticipation - but this car isn't the danger today.

But then a second car approaches.

And this one looks set straight on course for a crouched figure in the foreground.

The man notices in the nick of time.

But he has a rather brilliant (and incredibly speedy) reaction.

Instead of trying to get out of the way ...

And after landing on the bonnet?

The man just chuckles to himself. What a badass!

People have been going wild for the video.

It certainly offers a sense a thrill to the viewer.

Some have made this point.

How did the guy seem so chill after his brush with death?

What a smooth guy!

Here's the full video that got everybody talking.

It's not for the faint of heart though - so watch at your own risk!

It's certainly one of the best near-misses we've ever seen.

Fancy reading about a near-miss on a much more existential near-miss? Scroll on to read about the massive asteroid that only just sailed past earth on Christmas Day!