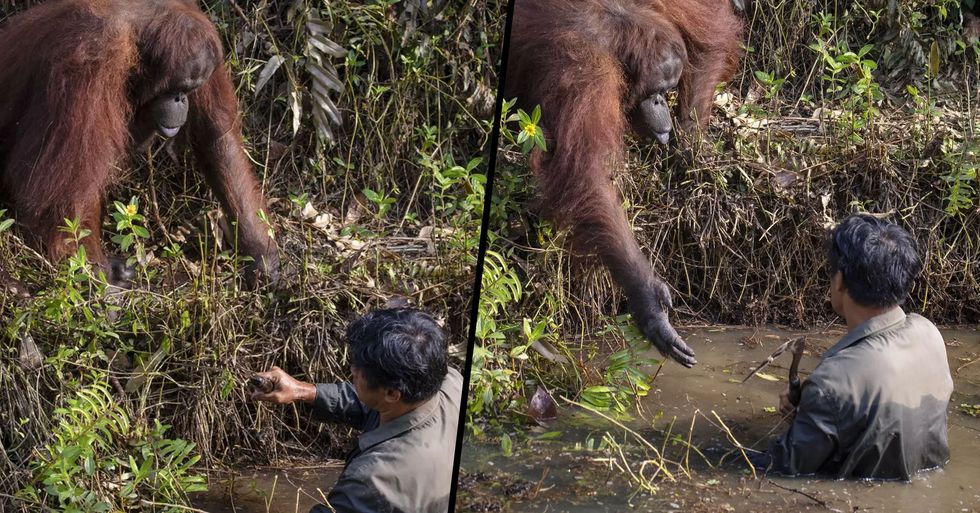 Orangutans are inquisitive animals, that actually have a lot in common with us.

One Orangutan protected by the Borneo Orangutan Survival Foundation did the sweetest thing for a worker that he saw waist-high in a nearby lake.

Scroll to the end to watch the adorable video!

Orangutans mainly live in the tropical rainforests of southeast Asia.

They measure up to 1.5 meters in height!

These guys have a massive arm span of two meters from fingertip to fingertip.

One of our closest animal relatives.

Their name actually means "human of the forest".

Sadly, Orangutans are on the endangered species list due to the deforestation of their natural habitat.

They live almost as long as humans.

In captivity, these magnificent creatures can reach 50-60 years of age. In the wild, they tend to have a shorter lifespan of around 30-40 years.

A photo has been captured of an orangutan doing the cutest thing.

He was spotted offering a hand to a forest warden. Scroll to the end to watch the video!

The pair shared a cute exchange.

It captured the moment the gentle beast tried to help the man who was searching for snakes in the river.

Snakes can pose a real threat to the primates.

In the image, the orangutan appears to be leaning over, offering his hand to the man who is waste deep in water.

The conservation forest, where the photo was taken, is in Borneo.

The orangutans are protected from hunters.

Anil Prabhakar was trecking nearby.

He was on safari with friends when he noticed the interaction taking place.

Prabhakar later found out that the man helps protect the animals at the non-profit organization.

The worker was clearing away snakes to protect the animals.

Well... he was until he got interrupted by the primate.

The photographer revealed that the worker refused to take its hand.

Prabhakar said: "Someone told him there was a snake in the river. The warden went there and cleared the bushes."
"An orangutan came to the banks and was watching what he was doing. He then came closer and gave his hand."
"The warden just moved away. I asked him why later and he said, 'It's a wild animal, not one we are familiar with.'"
"But they are to protect them."

The Borneo Orangutan Survival Foundation was founded in 1991.

It is solely "dedicated to the conservation of the Bornean orangutan and its habitat."

The organization is taking care of almost 650 Orangutans.

This is all down to the hard work of over 400 dedicated staff. The website states that "by protecting orangutans in their natural habitat, a whole plethora of other flora and fauna are also protected. Protecting their forest habitat is as important to humans as much as it is to wildlife." Keep up the great work guys!
20%