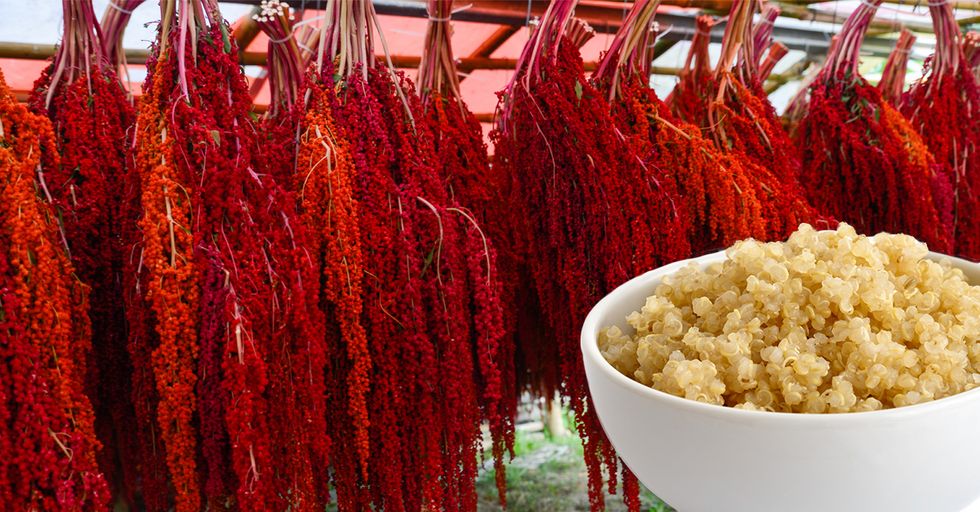 Look, you know where food comes from.

Some food comes from animals. Other food grows from the ground. And yet...

I just looked up how various food items grow, and I have to say, I was pretty startled by some of them.

Look at these and tell me, honestly, how many surprised you too.

In bushes! Bushes! Not only that, but it takes two to three years for one of these pineapple bushes to fruit. And, the fruits themselves are actually individual berries that coalesce into what we recognize as a pineapple.

They grow on trees. That's not too surprising. What is surprising is the fact that the part we eat grows on the bottom of a cashew "apple." You can see it in this picture.

They're Brussels sprouts. They grow on a stalk like the one seen here. In fact, you can actually buy them on the stalk in some grocery stores.

No, these aren't green beans.

They're vanilla beans! Vanilla is actually the edible fruit from a certain type of orchid. What makes it even more special (and expensive) is the fact that it can only be pollinated by a particular type of bee, which is in turn only native to Mexico and Central America. That means that vanilla that is grown in other places (such as in Madagascar) has to be hand pollinated. OK, now take a second to imagine how asparagus grows. Whatever you're imagining, I'm betting it's incorrect...

Just straight-up stalks coming right out of the ground. For some reason, this one is the most bizarre to me. But I'd still eat it.

Also, they're legumes; not nuts. That actually makes sense when you see them growing like this. They look kind of like beans, huh?

Don't you just want to chomp down on these juicy berries?

I wouldn't recommend it. Those are coffee cherries. The part we roast, grind, and drink is the seed located inside this fruit. The fruit itself can be brewed into a tea.

After seeing this pictures, it probably won't surprise you to learn that artichokes are in the same family as thistles. When we eat an artichoke, we're eating this flower before it gets the chance to bloom.

Any guesses about these fuzzy lil guys?

They're chickpeas! Or garbanzo beans, if you're so inclined. This next one is another flower (although we eat it when it's still just a bud)...

We typically eat them pickled. They go perfectly with some smoked salmon. If left on the bush, however, they eventually blossom into the beautiful (non-pickled) flower you see here.

I don't know exactly what I was expecting, but it wasn't a vine. Fun fact: the kiwi is also known as the Chinese gooseberry.

Is it just me or do these look like the flower from Horton Hears a Who?

But alas, they are not. They're actually the flowers that grow out of leeks.

Have you ever wondered why saffron is so expensive?

It's because saffron is actually the very tiny threads of a specific crocus flower (pictured above). Saffron is typically harvested by hand from these teeny tiny flowers. It takes a lot of work. And a lot of time.

OK, hold up a second.

This is what cloves look like in plant form:

The ones we eat (and season our pumpkin pies with) are the dried-up flowers of the clove tree. They start out pale, eventually turn green, and then become bright red when they're ready for harvest.

And these lovely flowers are the result of...

Broccoli! If you look closely at the top of broccoli florets, you'll notice that each one is made up of a bunch of closed flower buds. Hence the name "floret." You'd think I'd have put that one together.

These tiny green berries will eventually turn much darker in color.

And once they're dried, they become peppercorns. That's right. The stuff you grind onto your fried eggs is actually a dried berry.

Here's what almonds look like right before they're picked:

The nuts themselves grow inside those woody shells. Also, they're related to the peach plant.

Finally, here's a glimpse at quinoa in its natural form:

It's actually pretty beautiful, isn't it? The grains we eat are the seeds of the plant. Share this list with your favorite foodie!