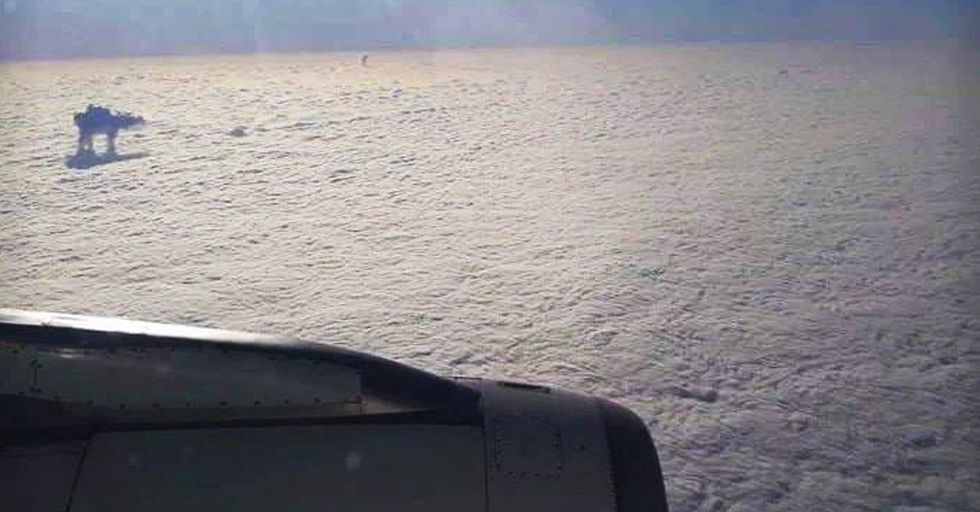 Incredible Photos That Will Stop You Dead in Your Tracks

The world is a beautiful and surprising place. From the natural wonders tucked deep within Yellowstone National Park to the mysterious stones organized by god-only-knows at Stonehenge, there are so many things packed onto this planet that make us shake our head and say "Whoa, dude."

And what do we do with all that joy; that wonder; that beauty we feel? We whip out our phones, snap a pic, and put it up on Instagram for, like, 140 of our friends to swipe past.

When you just post one picture at a time, the best you can hope for is a few dozen likes. But when you take all the inspiring images from all the folks collecting them, you end up with a pretty special photo gallery. And that's what we're presenting here today — a collection of incredible photos from Reddit's /r/WhoaDude that are sure to make you say, well, "Whoa, dude."

Why can't I see the string?

Don't look directly at it!

View of the Eclipse from an airplane. - xdel

What's a one-bedroom there run?

This video of Furong city, China, shows one of the most amazing places we've ever seen. How could anyone not want to live here?

You can count the individual hairs.

How is this gif higher quality than real life? - bonecrusher1

Human beings should not be able to see something so small.

First ever image taken of the Hydrogen atom. - ballard09876

If I could live here, I'd even be willing to make a studio work.

Imagine driving over that.

I had a few too many last night-- wait, no, that's just your face.

Animation about being tired in class. - PitYaker

Will the pilot be able to wrap the cable around its legs?

This cloud formation looks like an AT-AT on Hoth. - tanzaniteflame

How does this look so gorgeous?

The highest resolution picture in the world at 365 Gigapixels. - moderatelygood

This... this does not look good.

Everyone call your mom and tell her you love her before you're in a situation like this.

Sure hope a hero will rise to save us from whatever comes through!

How is this even possible?!

This macroprobe lens lets you see things the way a very small ant might see them.

Now this is an expertly-waxed car.

Where would a metalworker even begin?

I don't think I'll ever stop wondering how this infinity cube was made. It will be my final thought on my deathbed.

Seeing this wave crash over a photographer gives me the feeling of getting into bed and throwing the covers over my head after a long day.

Most people just dress as, like, Woody from Toy Story or something.

This is just Halloween makeup... we think. We hope.

What a time to be alive.

I wonder if they'll start doing astronaut podcasts next. Look at that pale blue dot. - MaxKlemens

It must be great to have a dad who is also an artist.

A time-lapse of rain storm. - dickfromaccounting

Almost tossed a quarter inside.

This is, honest-to-god, a sketch, done completely two-dimensionally, by @visothkakvei.

And if you thought that drawing was impressive...

This was drawn with colored pencils. - roadtrip-ne

No way is this not a person from the future.

This mask from a fashion show in Paris. - commentcontroversial

Meet Rainbow the White Lipped Python (Bothrochilus albertisii), her iridescence is caused by nanostructures in her scales called iridophores, which contain microscopic layers that refract light as it bounces between them. - drkmatterinc

Get ready to switch the train for the next 40 minutes of your life.

Whoa, our brains are far more powerful than we knew.