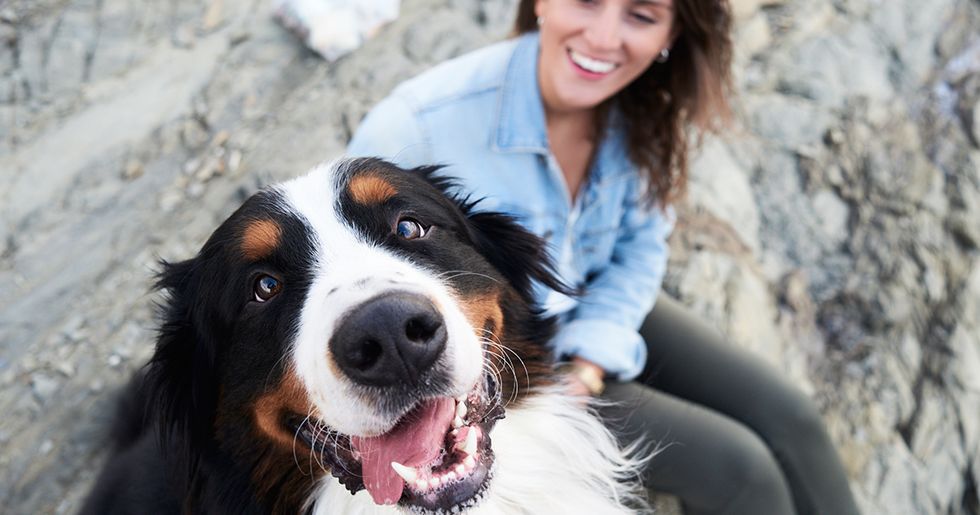 19 Pets Who Saved Their Humans' Lives

When you bring an animal into your life, you expect to have a companion who will keep you company and maybe perform some tricks for your amusement.

You don't expect that they'll one day save your life.

Honestly, sometimes it feels like we don't deserve pets.

Here are 19 amazing and heartwarming stories of pets whose brave and heroic actions saved their owners' lives. You might want to have a tissue handy for this one.

This is Todd. He's a golden retriever pup from Arizona. Todd was on a walk with his owner Paula when they came upon a rattlesnake! Todd swiftly jumped in front of Paula to protect her, and the rattlesnake bit him instead. Luckily, Todd was able to make a complete recovery. What a hero!

On April 4, 2010, a fire broke out in Ben Heinrich's workshop as he was doing maintenance on his truck. His house was nearby and in danger of being caught in the blaze. Neighbors saw the flames and called 911. State Trooper Terrence Shanigan started heading toward the property, but his GPS device gave out as he was driving through the remote Alaska back roads. He was about to make a wrong turn when out of the corner of his eye, he saw a shadow. It was Buddy, Heinrich's German Shepherd. "He wasn't running from me, but was leading me," Shanigan said. "I just felt like I was being led...it's just one of those things that we're thinking on the same page for that brief moment." Buddy led the trooper straight to the property and was able to keep Heinrich and the family home safe.

One night, Molly woke her human up by repeatedly tapping her feet on the floor next to his bed. Just three minutes later, the fire alarms started going off in the house. Thanks to Molly's quick thinking, everyone was able to evacuate to safety. She saved the lives of seven people, two dogs, and four cats!

On May 13, 2014, 4-year-old Jeremy Triantafilo was riding his bike in the driveway of his house. Suddenly, a neighborhood dog rushed over to Jeremy and bit his leg. Without missing a beat, Tara the tabby cat sprang into action and tackled the dog. She then chased him away and went back to check on Jeremy. This next story is absolutely incredible!

In 2007, the Svillcic family adopted Khan from a local animal shelter. Just four days later, he began acting aggressively toward 17-month-old Charlotte as she played in her family's yard. Charlotte's mother became alarmed, thinking the dog might attack her daughter, but she was completely wrong. In fact, Khan had spotted a King Brown snake that was about to strike Charlotte. Khan grabbed Charlotte by her diaper and gently tossed her out of harm's way, then put himself between the girl and the snake. The snake bit Khan, but his owners were able to quickly get him to a vet. He made a full recovery.

One evening, the Kecskes were woken by their family cat, Mr. Boo. "I woke up to my cat meowing. He never meows. He usually just squeaks or doesn't meow at all. It's actually kind of a joke in our family," Ariana Kecskes said. "He was sort of stumbling down the hallway, and he just kept meowing. He seemed to kind of want us to get us out of the house." The family finally took note of Mr. Boo's warnings and left the house. They then discovered that the gas boiler in their basement was leaking carbon monoxide into the home. Without Mr. Boo, the entire family may have perished.

A group of dolphins

There are actually several stories about dolphins saving people's lives, but today's story is about a surfer named Todd Endris. He was surfing at Monterey Bay’s Marina State Beach when suddenly a great white shark began attacking him. Suddenly a group of dolphins surrounded Endris, creating a wall between him and the shark. "[They] were going absolutely crazy and really saved my life," Endris said. “I feel like they were jumping over the top of me and swarming around me." Endris' friends were able to come to his aid and rescue him from the water.

In 2004, a diabetic man named Simon Steggall quietly slipped into an unconscious state due to low blood sugar. His wife Victorian thought he had merely fallen asleep while watching television. It was then that Steggall's pet rabbit Dory began jumping on his chest and thumping furiously on the ground. That made Victoria take a second look and realize her husband's dire medical situation. She immediately called the authorities who were able to revive Steggall.

Noel Osborne, an Australian farmer, slipped while doing work on his farm and severely injured his hip. He was stuck in the brutal Australian elements for several days before someone came by and found him. Luckily, Osborne's goat Mandy understood he was in distress. She stayed near him at night in order to keep him warm and even allowed him to milk her, so he had some sustenance as he waited for his eventual rescuers. Next up is the incredible story of Chi Chi the Chihuahua!

Chi Chi's owners Rick and Mary Lane were enjoying some downtime at a beach in North Carolina when Chi Chi — who was tethered to a beach chair — suddenly began barking in alarm. The Lanes said they had never heard him bark that way before and knew immediately that something must be wrong. They looked out into the water and saw two elderly women in a very dangerous situation. One of them had been pulled into a riptide by a rogue wave, and the other was trying desperately to pull her friend out. The Lanes rushed over to help the women, and Chi Chi was declared a hero by all.

Michael Bosch decided to take his dog Honey out with him as he ran some errands. As he was driving his SUV on the mountainous roads near his home, the vehicle lost traction and tumbled down into a ravine. Bosch was completely pinned by a tree limb, but Honey was able to escape through the broken passenger window. She went straight to Bosch's neighbor's house (which she had never been to) and alerted them to the accident. Thanks to Honey's brilliance, Bosch was rescued, and his life was saved.

In 2009, a parrot named Willie began screaming the words, "Mama! Baby! Mama! Baby!" Meagan, the bird's owner, had never heard him put those words together before. She immediately ran to check on the little girl she was babysitting and found that she was choking. Meagan performed the Heimlich maneuver on the little girl, and her life was saved. Willie received an award from the Red Cross for saving the little girl's life.

Jo Ann Altsman agreed to look after LuLu for her daughter one day, but it ended up being LuLu who saved Altsman's life. Altsman suffered a heart attack while her husband was away on a fishing trip. LuLu managed to squeeze herself through the house's doggy door and went out to the main road. There, she stopped traffic by laying in the middle of the road until someone got out of their car and followed her back to Altsman's home.

When a burglar attempted to break into Justin Becker's house, it was Becker's pit bull Kilo who jumped into action and saved the day. The intruder tried to shove his way in through the front door, but Kilo was ready and waiting for him and began to attack. The man shot Kilo in the head but left without taking anything or harming anyone else. Kilo suffered some injuries from the gunshot but was able to make a full recovery. This next story is about a pigeon!

On October 3, 1918, Major Charles Whittlesey and his men became trapped behind enemy lines without food or ammunition. They started receiving friendly fire from allied troops who didn't know their location. Whittlesey decided to send a message by pigeon. The first pigeon was shot down. So was the second pigeon. And then Whittlesey sent his third and final homing pigeon — Cher Ami. Cher Ami was shot through her chest, blinded in one eye, and her left leg was gravely injured...but she managed to make it back to headquarters and deliver her important message. Her heroic flight saved the lives of 194 men. Medics were able to save her life and even carved a new leg for her. She received several awards for her incredible service.

Reckless was a small mare bought by Lieutenant Eric Pederson from a racetrack in Seoul. During the Battle of Panmunjom-Vegas, she made 51 solo trips to and from ammo delivery sites under enemy fire. She was also used to evacuate wounded soldiers. She received several awards for her military service, including a Good Conduct Medal, a National Defense Service Medal, a Korean Service Medal, a UN Service Medal, A Republic of Korea Presidential Unit Citation, and two Purple Hearts.

In 1996, a garage where Scarlette and her five kittens had been living was set ablaze. The New York Fire Department came to put out the fire and found this brave mama cat who had been severely injured and blinded by the fire. Still, she walked back into the inferno five separate times to rescue her kittens. A firefighter was able to take all six cats to a local vet clinic where they were taken care of and eventually adopted out into loving homes.

In 2005, a 12-year-old girl was kidnapped from her home and beaten by seven men who were attempting to force her into marriage to one of them. The young girl had been missing for a week when police officers finally found her — surrounded by three lions who were standing guard. As soon as the lions saw the authorities, they calmly walked away.

Wendy Humphreys claims that her cat Fidge saved her life by sensing cancer hidden within her right breast. At first, Humphreys was entertained by Fidge's habit of resting on her breast. Fidge continued this behavior for two full weeks until Humphreys finally decided to visit her doctor and was told that she had a cancerous lump. Share this with a fellow animal lover!