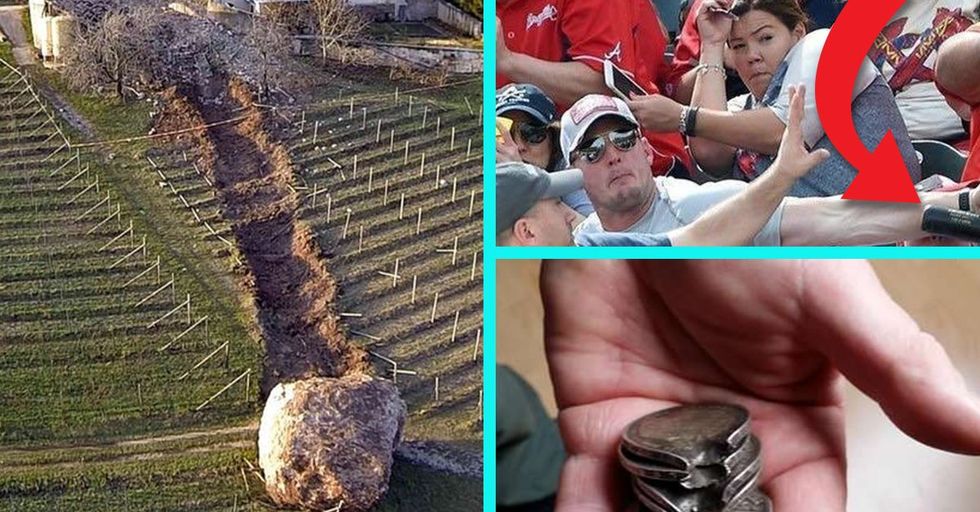 Incredible 'Phew! That Was Close' Moments

Everyone's had at least one close call in their life. One moment when they caught the railing at the precise right moment, or swerved right before catastrophe struck. Some people have been sharing theirs.

Here are the most striking ones.

This right here is the hand of the divine. How else can you explain the mere inches that this gigantic boulder missed this house?
We can only imagine how the owners felt after they came out and saw this. They probably went straight to their nearest place of worship and gave a deep breath of thanks.

This boy was inches from disaster and he didn't even know it. There he was, innocently typing away on his phone, never noticing the bat headed for his face.
Everyone else jerked away, but this one brave gentleman with the reflexes of a panther – nay, a house cat souped up on Meowmix – saved him. SAVED him. Hero.

3. Literal inches away from disaster

If there's anything new car owners fear, it's scratches on their cars. Nothing ruins the day like a messed-up paint job, and this lime-green Peugeot is not exception.
A tree fell over it. It could have been disastrous, but look where it landed – LOOK. Literal inches away from the fresh paint.

Cats love hiding places, don't they? Usually, there's at least one telltale sign that they're there. But what happens when the cat has natural camouflage?
This redditer nearly chargrilled their cat because its color was so darn near that of the stove's. Seconds away from disaster. Seconds.

The most important piece of jewelry most people have is their wedding ring. Not only are they expensive, there's all that sentimental value.

This person's wedding ring literally nearly went down the drain, but as it turns out, the drain was on his side. A very close call indeed.

6. Didn't need that much money to survive

Sometimes, history resonates in the oddest ways. In this instance, it was through a sextet of coins.
The six coins in his pocket literally saved this man's grandfather from being killed by Nazi bullets. Think about that.

Sometimes, it pays to know punctuation. Here, this brave person is telling their friend that they like them, but horror of horrors, the friend already has a boyfriend!
What to do? Use the power of punctuation, of course! With one handy question mark, the whole thing is resolved, and embarrassment averted.

Do you know how much professional cameras cost? Even the lowest-end camera will set you back at least a couple of hundred dollars.
This person must have forgotten all about that because they drove around with the camera on the back of their car. First of all – how dare you?

Have you ever heard these warning words – always wiggle the reader? It's used in reference to ATMs, which can have password swipers embedded inside them.
This person saved himself and countless others all sorts of hassle simply by checking the reader – something everyone is supposed to do.

This right here is an example of design gone bad. On one hand, we have a nighttime sleep aid. On the other, a laxative.
This lucky person narrowly missed pooping their butt off and got a good night's sleep instead, simply because they read the instructions.

Here's the thing about fathers – when they're tuned in, they're tuned in. Take, for instance, the gentleman on the right with his daughter sitting on his neck.
She becomes unbalanced and falls, but he saves her literally inches away from the floor. If that's not a dad, we don't know what is.

There's daredevils, and then there's this guy, who's literally begging for it. His whole routine, in our estimation, is basically flipping the bird to the fates.
But as it turned out, Lady Luck was on his side. One extra move – just one extra – and they would've been scraping him off the pavement.

We're not sure what happened here – maybe the road was too icy and the driver didn't see, or maybe he got startled and swerved...
Any which way, one thing we do know, however, is how the driver reacted once he saw how close he was to wiping out. He thanked his lucky stars.

We have so many questions here. First of all – how? Just how? Apparently, this was the work of an exploding angle grinder disc, but we have no idea what that is, so we'll move onto our next thought, which is very simple.
This guy is one lucky bastard. He's lucky he's still alive and has two good eyes. Oh, and we hope he sues the heck out of the angle grinder manufacturer. Again, no clue what that is.

Ask this guy, he'll tell you. There he was, inches away from disaster, and the only thing standing between him and a complete amputation was his cellphone.
This guy owes his phone manufacturers a vote of thanks. And also whichever engineer it was that decided to make that specific phone so durable.

16. The nope rope that almost bit back

We don't know about nope ropes, but this looks like a snake to us. Specifically, it looks like that specimen of venom-dispensing fury, the rattlesnake.
Now, we're not snake experts, so don't quote us on this, but we're gonna guess that this commenter is a very lucky man. One bite from this baby is more than enough to thoroughly mess up your day.

Golf is an incredibly dangerous sport. Don't believe us? Ask this guy, who was saved from a nearly fatal flyaway ball by his beer. Who says drinking beer can't save your life?

It's every parent's nightmare. A kid goes running into the street just as a truck comes careening over. But this scenario has a twist.
The kid survives. Incredibly, miraculously, he makes it back to safety. That is what we call touched by an angel.