This wallet made from banana trees | 22 Words 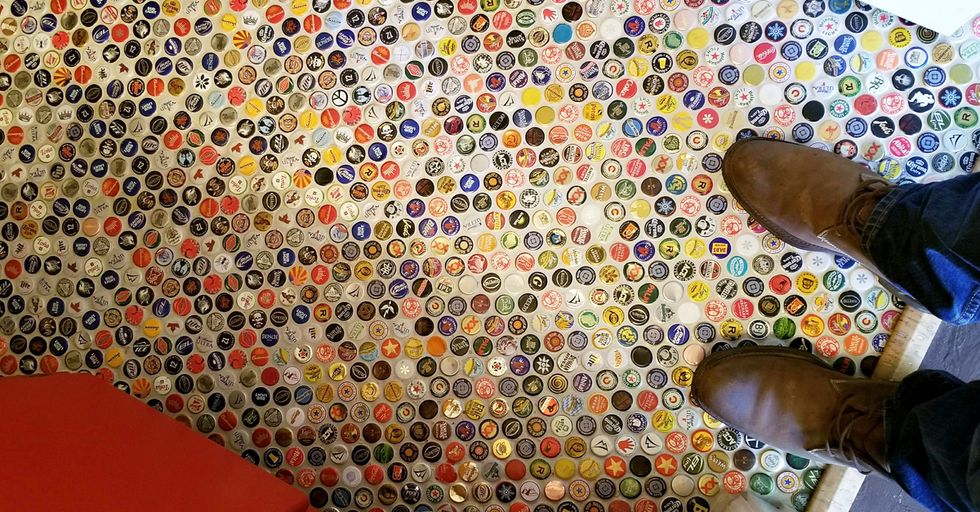 19 DIY Recycled Objects That are Impressive Beyond Words

It takes a special kind of creative person to look at one object and see how it can be used in a totally different context.

The people who created these impressive recycled pieces of art are unique and imaginative in ways some of us can only dream of being!

This is DIY elevated to a whole new level.

Some of these unexpected recycled objects you can totally make at home. Others, it's better that we left them to the professionals.

This floor made of bottle caps

That's a whole lot of beer you have to drink, but it looks so cool that I'll do it. I'll drink all that beer.

These bowties made from turkey feathers

OK, these are so dapper it's killing me. But also these would look amazing on a wise old owl.

This drinking fountain made from a toilet

Are you...are you actually supposed to drink from this fountain? Because no part of me wants to do that.

These Abe Lincoln earrings made from pennies

How cute are these? For the true fan of Abe Lincoln, these are perfect. The next one might actually blow your mind.

This slap bracelet made from an old tape measure

Did you know what slap bracelets were made of? It makes so much sense! My whole childhood all of a sudden makes sense.

This knife made from an old bridge cable

That's right. This cable used to help hold up the Golden Gate bridge. Now it's a knife. What a life that cable has had.

This staircase railing made from railroad rails

These are incredibly well-done and super impressive and who did this and are they for hire and will they do it for me?

This wall art made from masking tape

This is gorgeous and it's literally just made from masking tape. What genius was behind this?

This concession stand made from VHS tapes

It's quite clever this movie theater to use VHS tapes to make the counter for their concession stand. I mean, what else were they going to do with all those tapes? The next one will truly save the environment.

This cup made from plants

It's a perfectly usable cup, but it's not made of plastic! Instead, it's made of plant starch, which means it's totally biodegradable and way better for the environment. Down with plastic!

These hammocks made of seat belts

Strap in, folks! These seat belt hammocks are totally sturdy and totally comfy. What more could you want?

These bike racks made from old parking meters

Got parking meters that are no longer in use? Simply fold 'em over and use them as bike racks! A perfect solution.

This straw made of pasta

Yes, that straw is really just a dried piece of pasta. And you know what?! It works perfectly and is way better for the environment than plastic straws. It's time we stop using plastic straws altogether.

This bike rack made of...bikes

Maybe you don't have parking meters handy, but the next best thing is this bike racks made from the bodies of old bikes! The next one will change the way you think about chewing gum.

While we're on products made out of the things they're made to help, this little gum receptacle is made from your nasty, ABC gum! Who knew it could be of use like that?!

This wallet made from banana trees

I wonder if it makes everything smell slightly of bananas because I would be all over that sweet tropical scent.

This urinal made from a keg

It's the circle of the life of a beer depicted quite literally in this keg urinal. (Yes, I'm saying that a lot of beer tastes like pee.)

This Adirondack chair made from skis

This ski chair was found at a ski lodge, which, of course, is the perfect place for it. Anywhere else and it would probably look really weird.

This statue made from propane tanks

I don't know what he was built to sell but between his scary claws and his terrifying red eyes, I'll have nightmares forever. Share this with your favorite DIY buddy!