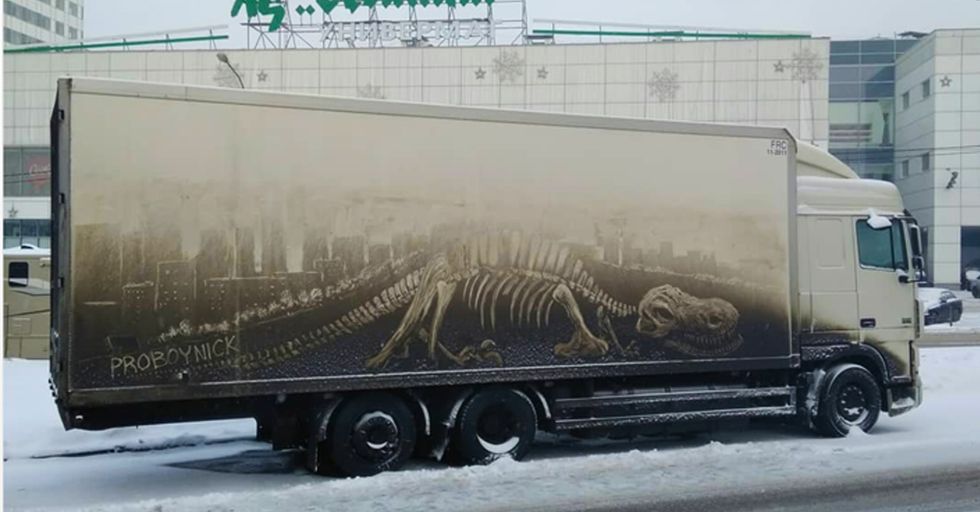 Some people see art when they look at a blank canvas.

Others, when they spot a really dirty car.

Nikita Golubev is a painter and artist from Moscow.

He's super talented, and he's brought his artistic creativity to a variety of different contexts. His latest canvas, dirty cars, may be his most impressive yet.

Golubev finds dirty cars and trucks around his city and draws incredible images right into the dirt. Like these blue flowers!

That right there is one super dirty van. I wonder where he finds them and if he asks permission before he gets to work!

Imagine driving behind this truck, looking up, and seeing that incredibly detailed portrait of a hawk! Love it.

That is quite the layer of dust, and that's an even more impressive octopus. The next one is totally rad, dude.

Look at the incredible scene he paints across the bottom of this truck! Those waves are huge!

Good thing this guy wasn't lurking in the water under those surfers. What a weird animal, if you think about it.

This photo was sent to Golubev by someone who spotted his art out on the road! This is truly a traveling art gallery.

That's a human guy with a pigeon head. Not sure what it's supposed to mean, but I like it.

The detail in the gorilla face is astounding. This is my favorite one so far! The next one really makes a statement though.

Golubev writes, "In Volokolamsk, city near Moscow, people are suffering from toxic gas coming from garbage dump." This is his plea for fresh air for the children.

It's quite a statement to use the dirt and grime on cars to make art that confronts the problem of pollution.

Do you know how hard it is to draw human hands, let alone giant ones out of the dirt on the back of a truck?

Do you need a bus ad for your next feature film? Don't pay for an expensive billboard! Get Nikita Golubev to draw it in some dirt!

Golubev calls his technique "dust brushing," and I think that's the perfect term. It's not quite painting or drawing. It's dust brushing! The next one takes on a sedan.

What is that thing?! It looks like something out of an Alien movie, and I am very on board.

Is it weird of me to say that I would absolutely wear this design on a t-shirt? Because I totally would.

I'd also wear this on a t-shirt. Honestly, Golubev should start a t-shirt business. He'd make bank.

The dirt on that truck is so dark it looks like the depths of the sea where these ugly, toothy creatures roam.

That is simultaneously the most frightening and most accurate portrait of a cat I have ever seen. Share this with someone who appreciates good art!