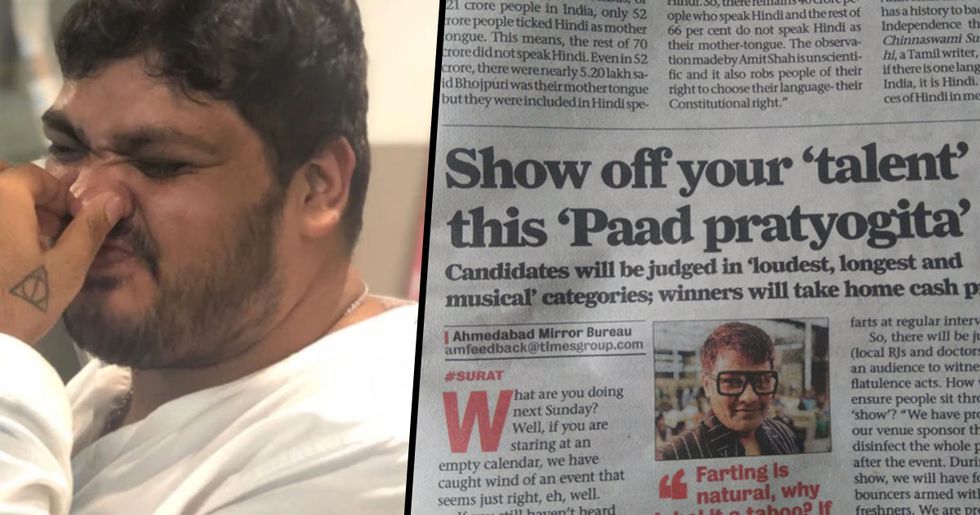 India Is Holding a Farting Contest for Those With the Longest, Loudest, and Most Musical Farts

Even though farting is a natural occurrence, society has deemed it utterly repulsive, border lining immoral. But it's normal human behavior, guys! This is the message that India is trying to promote with their new competition.

If you've ever been naturally gifted at producing gas, then I would suggest that you move to India immediately because they are now handing out trophies for it! I wouldn't get too excited, though, because there would be some stiff (and stinky!) competition.

Keep reading for all the details on India's first-ever farting contest.

Tucked away in the heart of South Asia is India.

By area, it is the seventh-largest country in the world with the population reaching over a billion people.

From food to culture, India is a popular country for tourists to visit to feel a raw and authentic vibe.

However, the news I'm about to tell you might make you refrain from visiting for a little while...

The home of Bollywood is about to be known for something a little less... classy.

Why is that? I hear you ask. Well, news has reached the internet that India will host its first-ever farting contest.

A competition in which individuals will battle it out to determine who is the best farter in all of the land.

Prepare yourselves, it's about to get stinky!

The "What The Fart" competition is set to take place next Sunday in the city of Surat, in the western state of Gujarat.

It was created by singer and filmmaker, Yatin Sangoi.

Yatin first hit the scenes in a TV show in 2001 but is now making a comeback with his innovative... slightly repulsive idea.

He had his reasons for the creation of his farting competition.

While making a statement, he tried to defend the idea by saying that he had an important message to share. Apparently, he is trying to "normalize the process."

Farts will be judged on their length, their loudness, and, most importantly, their musicality.

Maybe I'm missing the point here and there's an art to farting? Or maybe I'm just less shameless than half of the world that enjoys farting on public platforms so that audiences can have a whiff of what I ate for dinner. Who knows?

All I know is that Yatin seems sure that this will boost health rates...

A bit of a reach there, but you tell them! Yatin believes that rewarding people for letting one rip will promote the message that it's normal to fart so everyone should do it more often. Great. Now the whole world is about to smell worse than it already does...

This is what he told Vice:

Prepare yourselves for this heartwarming fart story that inspired Yatin to take this idea to a national scale.

"I farted in the middle of watching a movie with my family..."

"One of them laughed and said that if there was a contest, I would’ve won. That’s when it hit me that while fart contests happen in countries like China, UK, and the US, and even have a world cup, we don’t have anything like it in India." Maybe there's a reason that it doesn't exist in India, Yatin.

He also stated: "Now they’ve become all sophisticated and consider it gross, often shamed for farting publicly when even doctors will tell you that farting is one of the healthiest human body functions."

In India, and the rest of the world for that matter, farting is generally considered gross.

Imagine standing in a crowd of people and just letting a big one rip... You'll probably be shunned from society for the rest of your life. Not only is it disgusting to be around some random strangers' trapped air, but it's also kind of selfish to subject others to the pain of smelling it.

But now these competitions allow people to fart freely.

Just when I thought that the world couldn't get more insane, the hashtag #FreeTheFart has become the talk of the world, with many people agreeing that this would be an amazing idea.

So far, forty participants have signed up...

Scaling the whole of India, participants are traveling across the country just to take part. Weirdly, it seems as if people are warming up to the idea.

The competition is open to everyone...

Some people have some sanity left in them...

No Ravi, this isn't a joke, but I understand why you find it hard to believe. I do too.

It could be worse...

But let's not talk about that please!

So, if you're up for a fart-off in the hopes to win a trophy... Get stuck in.

Book yourself a flight to India and get involved. I'd take some extra air fresheners with you. If you're in the mood for a story about how to make farts smell less like ass... then keep scrolling.