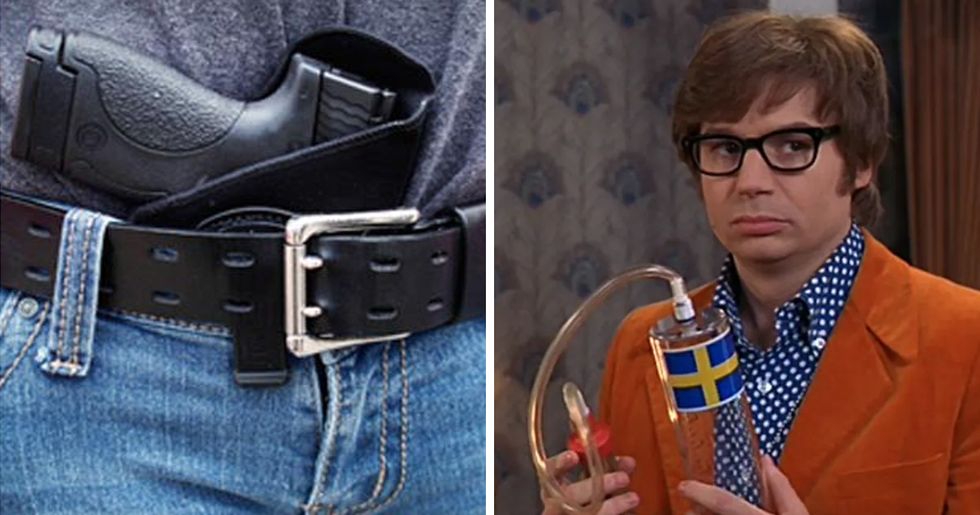 Listen, there are a lot of crazy accidents that happen in the world. If you're an anxious human like me, then it's probably best to not dwell on all of the bizarre things that can happen out of nowhere. You'll end up sitting on your couch for hours with your laptop open, looking up how people have gotten hurt or died doing seemingly stupid things. It's no fun, people.

But then there are some ridiculous accidents that are so bonkers that they feel like they can't be true. Like an Indiana man who accidentally shot himself in the penis.

The stupidity is truly astounding. You hear stories like this and you wonder how some people are even functional adults. Maybe if you're going to decide to be a person who wants to own a gun, you should learn how to actually use it. And not shoot yourself in the genitals.

We hear about freak accidents all the time.

Whether it's somebody getting struck by lightning or something falling out of the sky, they're really crazy and intriguing.

Me, reading about freak accidents on the internet:

It's a morbid obsession, but it's one that's hard to pull yourself from.

There are a lot of accidents that are absolutely devastating.

And then there are things that happen that truly make you question humanity.

I can practically feel the cringing and wincing through the internet. That's rough...

46-year-old Mark Anthony Jones was taking a walk with his gun strapped to his waist.

Ready for even more cringing?

Jones told the police that when he went to adjust the unholstered gun, it fired, shooting a bullet that "entered just above his penis and exited his scrotum." Nope. Like...dude! Why?

The press release was posted on the Marion Police Facebook page.

The press release also noted that Jones doesn't have an Indiana Handgun License. Are you kidding me?

This guy has to be pretty embarrassed.

Who wouldn't be? It's mortifying. The stupidity is off the charts.

In fact, plenty of people have hurt themselves in stupid ways. A reddit thread asked the question, "What is the stupidest way you have injured yourself?"

And the answers are truly entertaining.

Let's take a look, shall we? Warning: do not try any of these stupid things at home.

I mean, it seemed really cool in theory! That has to count for something, right?

What happened to good, old-fashioned leisurely bike rides around the block? This makes me wince.

This doesn't seem worth it.

I sure hope he was up-to-date on his tetanus shot. Yikes, dude.

Not if you're this person. Oh, the pure irony!

Even Superman has flaws...

It's hard work being a five-year-old superhero. But you have to save the world, so what are you supposed to do?

Some sneezes are intense.

This makes me terrified to ever sneeze again. This is like that scene in Hereditary... You know the one I'm talking about. If you don't...well, bless you.

Be careful when you go to bed.

This gives me a headache just reading about this story. Nobody wants to hit their head at four in the morning. Nobody.

Leave the wine opening to the professionals...

This is a genuine nightmare. Wine is supposed to help you relax, not cause you to punch yourself.

That's one ambitious three-year-old. Reach for the stars, kid!

When you don't learn your lesson.

In this person's defense, we all made really stupid mistakes in high school. You live, you learn. Hopefully.

When you just don't know what you want.

This is a great example of the importance of committing. Half-committing to something just ends in a severe neck injury.

Treehouses can be dangerous.

This is why I'm totally fine with having never had a treehouse. They're too high up! You could fall at any moment!

Spicy noodles are for the brave.

You don't want to mess with spicy noodles. They can nearly blind you, apparently.

Smile for the camera!

At least this person has a story to go along with their black eye. It'll definitely be a memorable school picture, that's for sure.

Never give up the window seat.

Even if it means sitting with a torn ACL for the entirety of the flight. Now that's dedication.

A kitchen is a terrifying place and the toaster is the worst kitchen appliance. Be careful out there, folks.

Well, this started out innocently enough.

See, this is why I'm terrified to sit on anyone's shoulders. Nothing good can come of it.

Back away from the stove!

I read this story with a feeling of sheer horror. Electric stoves are tricksters. They should not be trusted.

Wow, people really hurt themselves by accident a lot, don't they?

Not to mention in the most ridiculous of ways. We're all walking safety hazards.

But hey, here's the bright side.

The next time you hurt yourself doing something stupid, just remember: you're not alone! Share this with your most accident-prone friend.