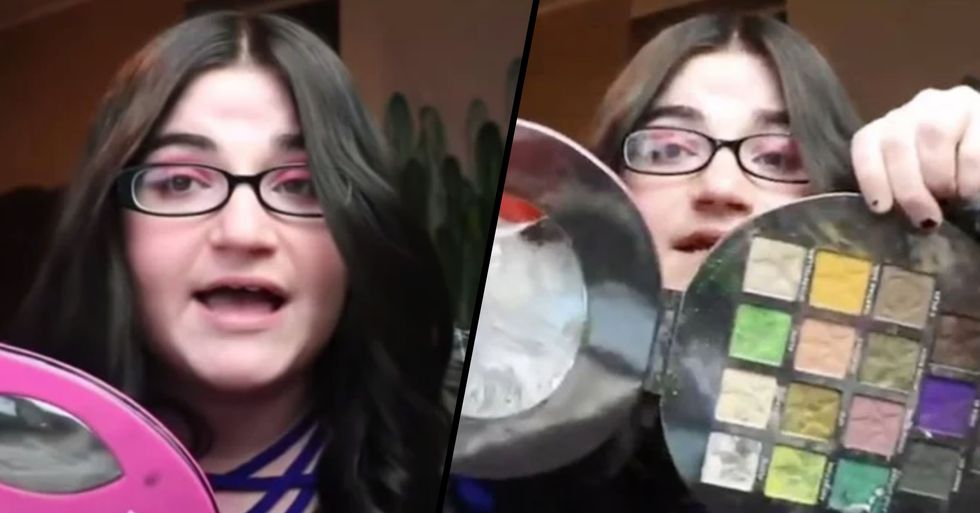 All makeup lovers can totally relate to that devastating feeling of an expensive palette being destroyed.

Whether that's through an accident or a mischievous child getting their hands on it... this kind of stuff happens.

But one influencer has now gone viral for all of the wrong reasons after she admitted to "beating the crap" out of her toddler for destroying her expensive eyeshadow palette.

Keep scrolling to find out more about this disturbing story...

Any makeup lovers out there?

Well, speaking as a makeup fanatic myself, there's nothing quite like the feeling of getting your hands on a brand-new makeup palette.

There's just something very satisfying about being the owner of an elite makeup palette...

And at the end of the day, makeup is an art form and people can release their inner creativities using just one brush and a palette.

And especially if you're branching out on the higher-end stuff, a makeup palette could set you back a few hundred dollars.

This is why a lot of people earn their money through makeup...

And if you're especially good enough, you can earn money from simply uploading tutorials and reviews online.

There are hundreds of thousands of beauty influencers out there...

And one influencer went viral last week for all of the wrong reasons.

This is Michelle Grace...

She is a twenty-three-year-old beauty influencer and she is also the mom to a 2-year-old toddler named Arya.

She uploaded a video to her Youtube channel captioned, "My Toddler Ruined My JSC Alien Palette|Now I’m sad"...

This video, along with her entire channel and social media, has now been deleted - but thanks to the internet, plenty of screenshots and records were captured.

As the video starts, Arya can be heard crying in the background...

And Michelle doesn't look impressed as she addresses the camera. "My 2-year-old just got her a** beat because no matter how many times I tell her not to mess with my makeup... she never f****** listens."

The young mom seems to be holding back her anger...

"I put it away to where she can't find it, and what does she do? She finds it! She has ruined 2 palettes of mine, and one of them is being discontinued!" she says as Arya continues to wail in the background.

She then describes how her hand hurts after dealing with her "troublesome" toddler...

"But she learned a lesson... because I just beat the crap out of her," Michelle then says, which is utterly shocking to hear her say in such a casual and matter-of-fact way.

After explaining how she doesn't normally spank her child, Michelle then explained the importance of these palettes...

It turns out that Arya had once ruined her James Charles eyeshadow palette, and she has now ruined her Jeffree Star Alien palette. "When you work your butt off for something, and you save up to buy something, it’s literally like a child. You treat it like a child."

Michelle seems to be more furious about the cost of the makeup...

"I can't afford to buy another $54 palette right now, as much as I would love to have every single one of the [Jeffree Star] palettes, I can't afford it! I was barely able to afford the Alien palette!" she said.

The cost of an eyeshadow palette is no reason to hit your child...

"I know a lot of parents might not agree with me. But I don’t normally... I don’t normally spank my child, unless I really have to, and usually, it’s just a pop. And it barely hurts. She cries for like, five seconds," she then said, completely contradicting herself after saying her hand hurt from hitting Arya.

The majority of Michelle's followers were horrified by the video...

And many felt that the influencer demonstrated that she cared much more about her makeup than her own daughter.

She received a lot of backlash...

And rightly so! But before she deleted her Twitter, she released a statement that read, "What I did should have never been done. I acted out of emotions and had a lapse in judgment... That being said, I’m truly sorry if it all came off the wrong way. It was poor choice of words and I admit that."

She insists that she is a young mom and that she makes mistakes...

"I should not have made it seem like materialistic things were more important than her because trust me, they’re not. I realize now where I went wrong. I love her more than everything and everyone. I always have," she insisted. "I’m a young mom and I’m far from perfect. But I am a good mom. My video and my clouded feelings didn’t show that at all and I truly am sorry."

Michelle went on to explain how parenting is not easy...

"I’m still learning to go this whole parenting thing. It’s not easy. I don’t think it ever will be easy. I hope one day you all will be able to see the good in me."

Michelle tried to claim that she didn't hit her daughter hard...

"Yes I popped/spanked her. But not hard. It hurt her feelings but not her. When she doesn’t listen to what I tell her, I feel like a failure as a mum. Talking calmly and taking things away for short periods of time sometimes doesn’t work with her." But this doesn't make it okay.

The incident is now being investigated...

And apparently, Michelle is "okay with this." "I’m not mad at anyone," she concluded, "I appreciate the concern and I promise to be better moving forwards."

You can watch Michelle's video here...

This is a potentially developing story, so make sure to stay tuned for further updates. But in the meantime, keep scrolling to learn about the cruel mom who cut out her daughter's braids to spite her ex-husband...
20%