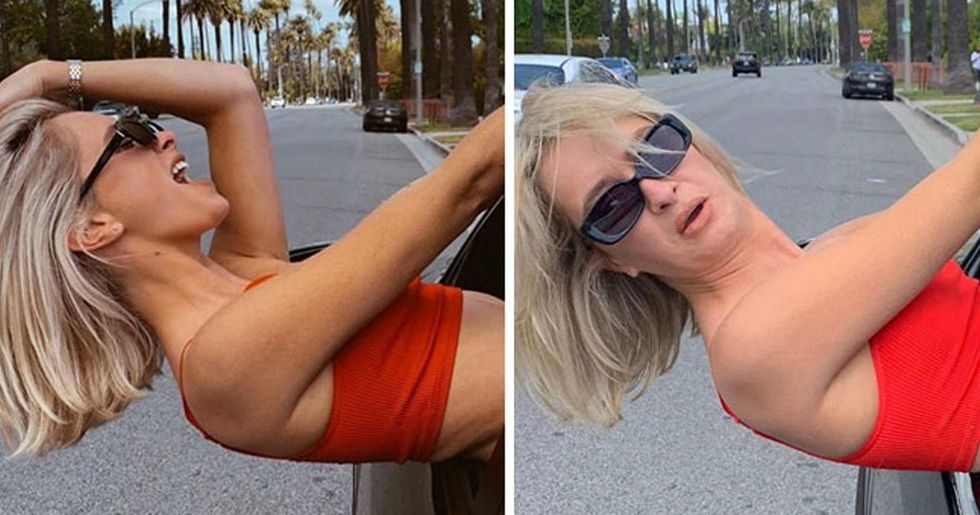 All of us are more or less aware that Instagram isn't a platform to depict the most accurate account of our lives.

Not pictured: the four hours spent queuing outside making frosty small talk because they too arrived early.

Not pictured: How none of the gals keep in touch anymore because what's the point.

Not Pictured: The band didn't play any of the songs they knew because they just wanted to promote the new album; which was a total flop anyway...Not to mention the lead singer's rant towards the end about how he wished everyone would put their phones away... Awkward.

It's not just the story behind the perfect Instagram picture that might be misleading. Editing applications can make us look thinner, plumper, appear to have a better complexion and eradicate the double chin.

One Instagram influencer is taking the discussion a step further. Amsterdam based, Rianne Meijer, who has 358K followers, decided to reveal her "outtakes". By showing the less-flattering images she had previously not shared, she uncovers the true power of the right angle, right lighting, and right filter.

Let's take a candid look at the not-so-candid knack to conquering the gram...

"So while waiting here at the airport in Berlin I figured no better way to spend my time than to keep it real."

Speaking to her followers, Meijer explained that she wanted to post some of the outtakes from her catalog of photos to remind them that:

The pic on the right is the classic normal person holiday snapshot. Your dad's insisting you get your photo taken, you feel awkward, the sun is in your eyes and a frumpy jumper makes you look, surprise, surprise.. a bit frumpy. Whereas the image on the left looks like a photo straight out of vogue. Perfect hair, clothes fall like a model and features in cool-girl territory. Sorry dad, do you think you could take it a hundred times until we get this shot?

It's relieving to know from this contrast that sticking your upper body out of a moving car isn't as easy as it looks on the left- also that even Instagram influencers also look like a bit of thumb in some angles.

Strong jawlines are all in the delivery.

Don't waste your time agonizing over your double chin, the truth is even models have that under chin chub, it's all in the angle guys.

I don't think it's fair to say Meijer looks "bad" in the right pic but looking straight at the camera, laughing candidly at the photographer is certainly gives off more "likely to star in an indie movie" vibes. Whereas the left image is certainly a more "Where's my Hollywood Star" vibe. The artistry of the angle!

If you take any Instagram photo-taking tips from Meijer's collection perhaps it should be that if you want to avoid always looking goofy in pictures (hi) then maybe opt for the less goofy more sultry open mouth. Pouting is a classic favorite of anyone that enjoys getting their photo taken; not only does it help emphasize your jawline it also makes your lips look plumper. Smiling, on the other hand, makes your upper lip shrink and weakens your chin.

Prone to getting a shiny forehead? The right filter will wipe it away!

I think we can also appreciate from this snapshot that it is nearly always too cold to be floundering around in a skimpy dress. Layers are always necessary, even influencers don't like to be cold.

Nose conscious of the side profile? Sunglasses are a simple trick.

Most people aren't fans of their own side profile but again, a couple of simple adjustments and refraining from the feature emphasizing smile is all it takes to give your side-angled pic that influencer edge.

These shots perfectly encapsulate the expectations and realities of summer hols. Expectations: Perfect tan, calm, relaxed, soaking up the summer vibes. Realities: Still pale despite sitting in the sweaty sun all afternoon, hungover and a bit bored.

"Oooh, a white wall- quick get out the camera!"

There's nothing an Instagram influencer likes more than a white wall, or a pastel blue, pink, even an orange maybe? Basically, a block-colored backdrop is a prime crop for the perfect shot. Also taking a photo from below ensures a much more flattering shot- as we can see above.

Shoulders back and look out toward the sunset...

Good posture is key to making a strong pose. "Shoulders back, head up"... said everyone's moms, dads, and teachers- little did we know them they were giving us the secret to achieving the perfect Instagram snap.

How to look cool in a field of flowers...

Not wanting to look corny posing for a photo in a field of flowers might prove difficult- that is of course unless you take a candid appearing- not looking at the camera- closed mouth smile- shot. Closed eyes and a closed-lipped smile transform Meijer from the much more goofy looking self to the right.

Which way is the wind blowing?

Instagram influencers might want you to believe the world is not a cold and windy place, they might even like you to believe there is never a grey cloud or a gust of wind during the summer months. In this shot, Meijer proves that Influencer photos are also victims of wind. Getting the perfect summer-still shot requires multiple goes.

You can't go to Amsterdam and not get a photo on a bridge, can you? Did you even go to Amsterdam if there isn't a picture of you taken on a bridge? Certainly not if you're an Insta influencer anyway. The quality of the right shot is down to the angling of the body, that clever sunglasses trick again, no goofy smiling! And? A quieter backdrop- fewer boats on the left photo, did you notice? This is turning into quite the spot the difference game, isn't it!

How to take a laughing picture whilst avoiding looking like I've got a weak chin? : Google search.

The answer? Put your hand in front of your face! It's brilliant, what a top tip.

Anyone else feeling way better about themselves from looking at these pics?

I think that was undoubtedly Rianne Meijer's intention. When posting part of the collection she stated:

"for everyone who’s having a bad day: you is beautifull"

...or perhaps she should have added, "at the right angle!"

It's no easy job getting the right angle when working with live animals...

Animals don't make for the easiest co-stars and who knows how many attempts it took for Meijer to get that strong jawline, cute scrunched face shot selfie. I'm gonna wager it took quite a few goes.

Whilst the "make-up free" look might suggest that the Instagram influencer is showing you their natural look, in reality, the photo you're going to see is still going to be filtered, have kind lighting and be taken from their best angle. But isn't it reassuring to know in reality-reality they do look just as pale, tired and weak chinned as the rest of us! Phew.

Sometimes you have to test a few angles...

The sunhat, leaning towards the camera shot, in theory, might have worked just fine. Only in practice did Meijer- and whoever takes her photos realize it wasn't meant to be. The strong, shoulders back, arm behind the head bikini-look is much more striking, don't you think?

On a bright day: sunglasses are a must to get the right the snap.

Squinty sun invaded eyes don't exist in the world of the perfect influencer. The simple mask of a pair of sunglasses set apart the art from the amateur.

That might have been obvious to you anyway but if not, as these two pictures side by side clearly demonstrate- if you ever pull the "I'm too cool to get my photo taken" expression, the likelihood is that you won't look very cool in the photo.

The actress vs. the director of photography.

Control doesn't photograph so well: looking nonchalant and indifferent? much better. Also, everyone looks much taller when the photographer crouches low, don't forget!

A few slight adjustments can make all the difference.

Not that the snap on the right is bad, it's just not Instagram influencer ready. A few strands of hair pulled forward, jacket buttoned up, head up, shoulders back... Feel like an expert yet?

Influencers sure do love an In-N-Out burger and fries.

Or maybe, just maybe that's just what they want you to think! Nah, I mean Meijer is yawning in that right photo but as we're learning: mouth closed for a good photo. Right?

The power of the filter!

This filter takes the shot from looking like it was taken in any bog standard pizza restaurant to a realm that's much more "rustic Italia". Pretty authentic, no? Also, remember - don't make eye contact with the camera... try and find a sunglass-less influencer doing that!

From beach-chic to "pass the suncream"...

These pictures could be of different people but as we know, it's the same person. The only differences that exist between them are the use of a good filter, positioning, and expression. It really seems to be a special kind of magic, doesn't it?

The trouble with photographing food...

Influencers take photos of and with a few things: their friends, their dogs, their beauty products and their food. The latter is difficult to get right. Not only do they need to look good, but the food does too. Not only that but, who looks their best when they're chewing food? The best trick any Insta influencer will tell you is to imitate eating until you've got the best shot- then you can go right ahead and get on with your meal!

Glowing in the sun vs. hot and bothered in the heat?

A perfect way to end, with a shot that proves how the effortless 'fun in the sun' vibes influencers might project to you this summer is probably not as clear cut as they'd like you to think. The sun, believe it or not, makes us all sweaty and sunburnt and stuffy and tired. So if you find yourself shut up inside this summer, a bit hot and bothered, scrolling through Instagram at people having what appears to be 'the best of times', take no notice. More likely than not, they're probably in a dark room too, sitting alone on the couch airbrushing out their double chin for their next post. Now, don't you feel better? Or do you feel worse? Maybe you don't feel anything. That's alright too.