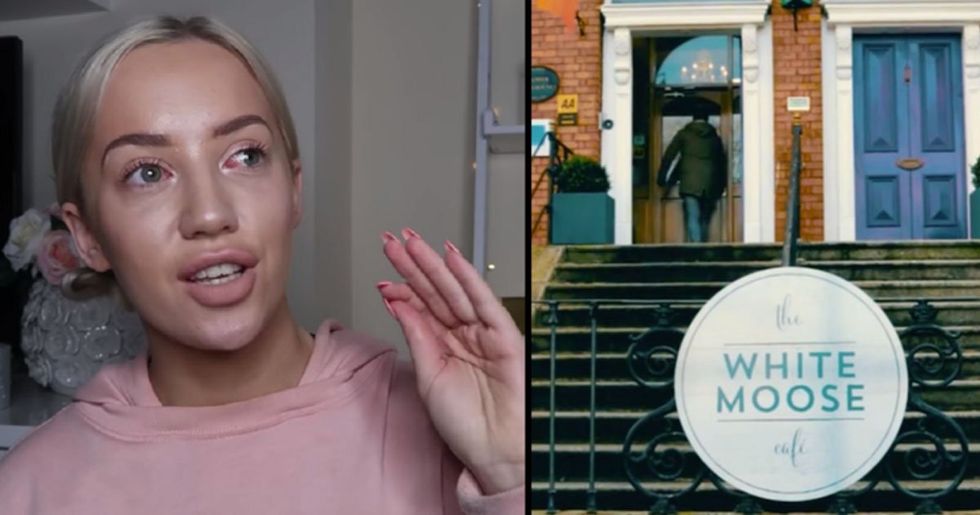 In this day and age, asking for a hand-out has become the norm. Self-entitled twits on the internet who label themselves "influencers" have decided to parade around the world, asking for free goods and services in return for "exposure." This kind of thing has become way too common and I'm disgusted to know that it's mainly the younger generation who are part of this weird cult of influencers that are living the freebie lifestyle.

From "begpackers," who trot around the globe with the hard-earned money of others, to "bloggers" that think that they are entitled to a free stay at a hotel, I'm sick and tired of the lot of them.

And this particular manager was not having any of it either...

Paul Stenson is the manager of a little hotel in Ireland.

The "Charleville Lodge Hotel" is a place tucked in the heart of Dublin, Ireland. It also has a popular cafe called "The White Moose Cafe," which Stenson also owns.

While the rooms are nice, the place is better known for something else...

The hotel takes a slightly different approach when attracting customers to the establishment.

At first, I thought that there's no way that this place can be real, but it is!

They have a good ol' cynical view on things!

I mean, it's better to be honest, than to lie about the service, right? So, if you're planning on booking a room here, don't expect too much.

All of their social media platforms have the same kind of vibe.

This was posted by "The White Moose Cafe's" official Twitter page. Paul Stenson highlights some slightly controversial things about his hotel and restaurant which has led to some negative press.

It started off with vegans but now includes gluten-free folk.

The website reads: "If you are not happy with any of the above, you are probably a precious snowflake in which case we don’t want you in our café anyway." However, on multiple occasions, the manager has outlined that people with genuine medical conditions have a pass and can eat in the establishment, where staff will keep their dietary requirements in mind. So what are all the complaints about?

Paul is known for releasing risky statements such as this one...

It got so bad that a "member of the public" actually reported him to the authorities, who contacted him accusing his business of discrimination. Stenson shared photos of the letter on his Twitter account with a link to his very detailed response.

And, recently, influencers have been added to this not-so-exclusive list of people that Stenson does not like...

But, you know what, entitled bloggers are the worst, so we're with you on that one.

It all started when a young woman emailed the company...

Knowing how savage Stenson is, I wonder what possessed her to send such an email... It starts off okay, with the typical introductions...

And then goes straight into the flaunting...

It only goes downhill from here...

Give me a break!

The funniest part of this whole email is the fact that she states that she was able to help a place in Universal, Orlando... Can you get any more arrogant?

I'm telling you now, you aren't going to be "looking forward" to the reply...

And the little smiley face isn't going to lessen the blow, either.

The manager's response was hilarious!

These "bloggers" and "influencers" who think that they can take liberties over business owners and staff is disgusting. I'm so glad that he didn't hold back with his response.

He raises all-important points in this section...

I wonder if "influencers" actually think about anyone besides themselves? Or are they stuck in some sort of la-la land, wherein they are the only resident that matters?

And the savagery didn't end there...

This section of his response contains some home truths. How does one have the audacity to ask for a freebie when they can afford to be traveling in the first place? It just seems like an arrogant lifestyle, wherein they think that gracing people with their presence is enough to pay for goods and wages.

Get a job rather than cheap-skating off the back of other people's hard work.

And if you're still a little unclear...

Stenson rounded it off pretty well for us.

He gained a lot of support for his brutally honest reply to the blogger.

Many people on Facebook believed that influencers are taking this whole "entitlement" thing too far. And we agree.

However, Paul also faced an immense amount of backlash for publicly "shaming" the young woman.

via: Faceboook // The White Moose Café

First of all, he kept her name and details anonymous - imagine how bad it would have been for her if he included her email or her username in the response? If she's going to send an email like that, I think that she deserves to be named, but Stenson actually did her a favor. And you wouldn't believe who put these complaints through. Of course, it was other fellow bloggers!

But he had the perfect response to clap back at the haters!

"The White Moose Cafe" released an official statement regarding the matter. From here on out, all bloggers and influencers are now banned from the hotel and the cafe! Have a little bit of that!

The truth hurts, doesn't it?

Imagine being so petty that you would target a company, purposely trying to ruin their reputation, because they wouldn't give you a freebie... People had even gone as far as sending Paul personal attacks, calling him a "f**king idiot" and telling him to "get some customer service skills."

He just did what he had to do and banned the influencers that give the entire industry a bad name. If you want to book a room at the hotel, come as a normal human being, as opposed to a self-entitled twit who lives their life on the internet.

Why don't you get a real job like the rest of us?

It might humble you into being a respectful citizen.

This whole chaotic incident resulted in a new addition to the cafe...

And we totally love it!

And if you're offended by any of the things that you've read in this article...

I can assure you, Paul Stenson does not give a s**t. And if you want to read more about influencers getting what they deserve, have a read of this article about how an Instagram blogger was forced to delete her account after a bikini photo that she took in a, well, questionable location.