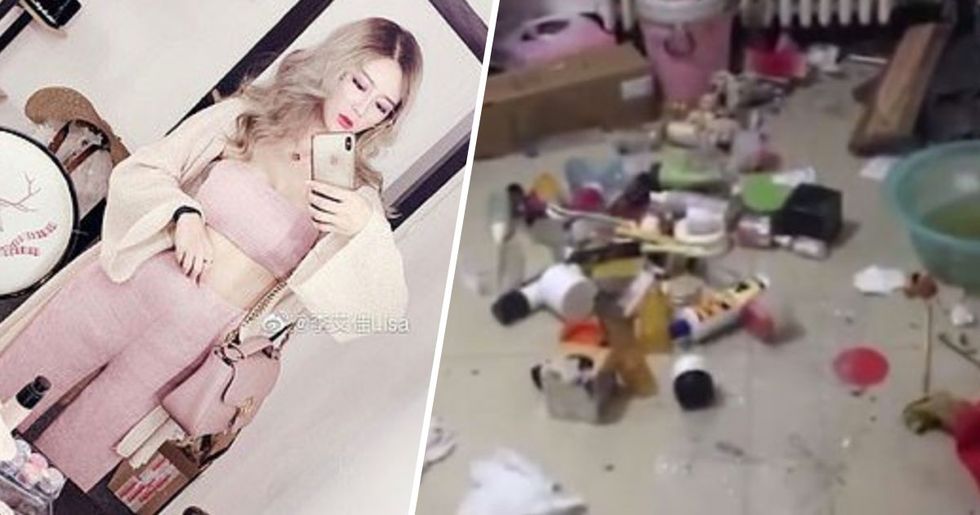 With the rise of the Instagram influencer, it's easy to feel inferior or even envious. When faced with snaps of lavish vacations, plush apartments, designer clothes, and the "perfect" body, it's no wonder so many of us are left feeling pretty crap about our own lives.

With Instagram profiles awash with perfectly crafted images, it's easy to forget that so-called influencers are people too, with real feelings and real problems - just like anyone else. In fact, many Instagram stars have come out and spoken about how what they present online isn't "real" and that they only showcase the best.

But, one influencer, named Lisa Li, has had her "double life"  exposed after her landlord filmed a shocking video of her supposed "glamourous" flat, which was revealed to have been covered in filth and trash. The disgusting images showcase all too well that what you see online can be far from reality.

Whether you like it or not, Instagram influencers are now a big part of the social media landscape.

With their lavish lifestyles, jealousy-inducing getaways, and seemingly "perfect" lives, those rising in the ranks of Instagram stardom truly are making the big bucks.

We doubt many people would turn down the chance to earn a living from posting on Instagram.

But we all know that what we see online isn't always the reality.

The perfectly crafted, edited snap you're comparing yourself to? Or the luxury sponsored getaway you'd never be able to afford? It may all seem great on the surface, but we all know that influencers (or anyone, really) only showcase the highlights on their profiles.

The bad stuff often gets left out.

Many stars have come out and admitted that what you see online is far from reality and that influencers are real people with real problems, just like anyone else. And for some, enough is enough...

The Australian influencer, who at the time had raked in an impressive 600k followers, described the platform as “contrived perfection made to get attention," claiming that "it's not real life."

It was a pretty shocking move...

For someone who claimed they could make $2000 AUD "easily" on a sponsored post, people were pretty stunned at her radical change of heart, but she had quite clearly had enough of trying to present her seemingly "perfect" life. The star even went to the effort of changing all of her captions to showcase the "real" story behind the images. For example, a since-deleted photo of her wearing a bikini, once captioned: “Things are getting pretty wild at my house. Maths B and English in the sun," was edited to: “see how relatable my captions were – stomach sucked in, strategic pose, pushed up boobs. I just want younger girls to know this isn’t candid life, or cool or inspirational. It’s contrived perfection made to get attention."

But, for many online stars, there's a pressure to keep going.

After all, with potentially millions of fans to please, it must be hard to press pause on portraying a polished "life."

For most, their profiles are an exaggeration of their actual life.

But for one influencer, her social media profile went beyond this, in what many are dubbing as an extreme "double-life."

The Chinese influencer has racked up a staggering 1.1 million followers on the social media site, Weibo.

She's known for posting about her luxury-laden lifestyle.

She'd regularly show off her costly trips to luxury restaurants and eye-watering vacations with her fans.

But the reality was much different...

We all know that what you see online isn't the full story, but, in Lisa's case, it wasn't even on the same bookshelf.

The star has been exposed by her landlady...

A video has gone viral of her landlady, named Ms Chen, revealing the extent of the Lisa's "disgusting" apartment in Xi'an, northern China, which was found littered with trash, rotten food, and dog feces.

Ms Chen claims that, despite frequently trying to contact the star, her attempts came to no avail.

Completely fed up with being ignored, Ms Chen decided to film a video of her tenant's flat and share it online.

The video has since been viewed over 6 million times, resulting in a trending Weibo hashtag which translates to "female internet celebrity left apartment full of poop." How lovely.

Her lavish lifestyle couldn't be further from the truth...

Her cluttered, dirty apartment is a far cry away from what Lisa's social media account would have you believe.

Trash and rotten food lay strewn all over the surfaces.

It's utterly horrifying to see how she managed to mask this online.

Honestly, we don't blame them.

Following the shocking footage, Lisa attempted to take matters into her own hands.

The influencer met with her landlady and the pair were filmed shaking hands. Another clip posted to Lisa’s Weibo account, showed her apologizing to her followers after she was subsequently slammed for leaving the flat in such gross condition.

She even went to the lengths of posting a video of her cleaning up her flat...

According to the BBC, the social media star told her landlady that "complete responsibility lies with me on this incident." She also vowed to "clean overnight,"  with one clip showing the usually-glamorous star sweeping up trash.

But her attempts to straighten-out her reputation didn't pay off...

Almost overnight, Lisa lost a third of her huge 1.1 million following... which is a significant loss to someone who makes a living online. Looks like she'll have to get hunting for a new day job. Interested in other scandals happening in the world of online influencers? Keep scrolling to read about an Instagram star who rattled quite a few cages after demanding free drinks at a swanky Australian bar. He got shut down in the best way...