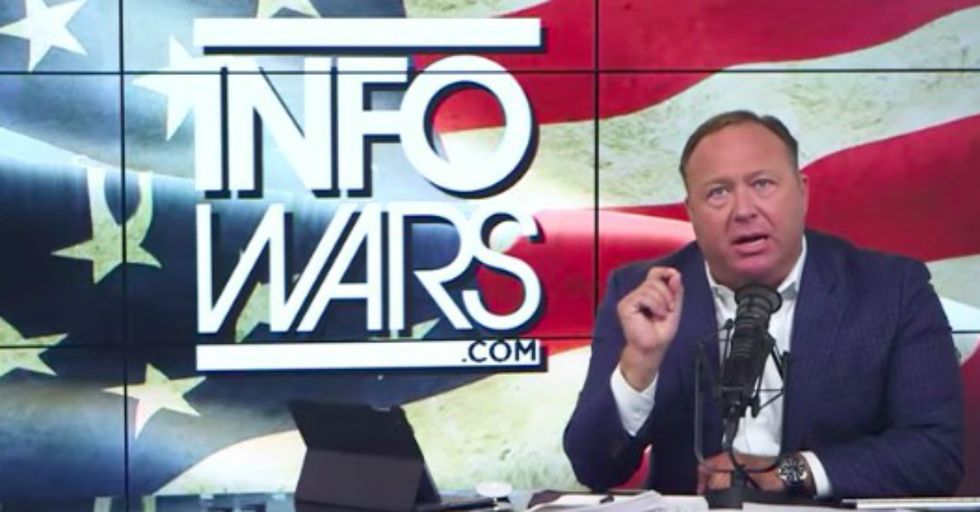 Alex Jones —radio host, filmmaker, drug-pusher, and professional angry man —says a lot of things. Let's have a pop quiz. Can you tell which one of these is a real quote from Alex Jones?

"There are ALIENS in this room right now!"

"Repent Now! Repent Now! I know your mustache is cool! You scare me so bad! SCUM! SCUM!”

Trick question. They're all real. Yes, even the one about mustaches. However, in a recent episode of InfoWars, Jones shared a new conspiracy theory with his millions of listeners. It's a real doozy.

If you've managed to get through your life so far without ever hearing about Alex Jones, count yourself lucky.

Jones, the angriest baked potato of a man, is a radio host and conspiracy theorist. He founded InfoWars, an outlet that claims "There's a war on for your mind!" He's also the host of The Alex Jones Show — a show that features him alternating between screaming and crying over the latest conspiracy he's decided to introduce to the world.

All of Jones' conspiracy theories sort of revolve around one called "The New World Order."

Basically, Jones believes that the world's elites are planning on exterminating 80% of the population in order "to live forever with the aid of advanced technology." He even made a documentary about it. It's called New World Order.

Jones doesn't shy away from controversial conspiracy theories. In fact, he embraces them.

In addition to claiming that 9/11 was an inside job, he has also claimed that many bombings and shootings are "false flag" attacks faked by the government to promote their own agenda.

Recently, he claimed that the Charlottesville attack was organized by a someone who used to work for Obama.

Oh yeah, and he thinks the government plants "estrogen mimickers" in the lining of juice boxes to turn children gay. Honestly. We couldn't make this stuff up. Although that doesn't stop Jones from saying it.

Needless to say, the guy's a little unhinged.

There are very few things Alex Jones has ever said that aren't completely bonkers. But his latest conspiracy theory may just take the cake...

In a recent episode of The Alex Jones Show, Jones claimed that Donald Trump is being secretly drugged.

"They are putting a slow sedative that they're building up, that's also addictive, in his Diet Cokes." He said.  "And in his iced tea." It's one thing to drug the president's Diet Coke...but the iced tea, too?! That's just bananas.

Jones claimed he was given this information by "high-level sources."

And that he was risking his life by sharing it. Apparently, people who speak Trump every day told Jones that the President gets worse throughout the day. "The President, by six or seven at night, is, basically, slurring his words," he said. "And is drugged," he clarifies for anyone who may not have understood the implication.

According to Jones, drugging presidents is nothing new.

He opened the segment by talking about how, after Reagan was shot, he was never the same because of the same "slow build of sedatives" in his system. In fact, Jones said, "it's known that most presidents end up getting drugged." Most presidents?! That is...decidedly not known.

"I’ve talked to people that have talked to the President at nine at night." Jones said. "He is slurring his words."

"And I'm gonna leave it at that," he said...before immediately going on to say more. He then talked about how the dosing is similar to how one would build up an immunity to the venom of "a cobra, or a rattlesnake, or a water moccasin," except...the complete opposite. Because instead of building up an immunity, the person being drugged is actually getting weaker and weaker. You get it. Honestly, it was a bunch of incomprehensible word salad. Which is kind of Jones' specialty.

You can watch the whole video here. The relevant part starts about eight minutes in.

But trust us on this one. Watching the video isn't going to make anything make more sense. As you might expect, the internet has a lot of opinions about this conspiracy theory...

Most people think that Trump may not be the one who's being drugged.

Has anyone checked Alex Jones' beverages lately? Someone might want to get on that...

Other people are expressing a touch of jealousy.

If being drugged means we get to pretend none of this is happening... ...Would that be so bad?

This one sums it up best, though:

Is this real life? Is someone really saying Trump is being covertly drugged? Are our Diet Cokes still safe?!