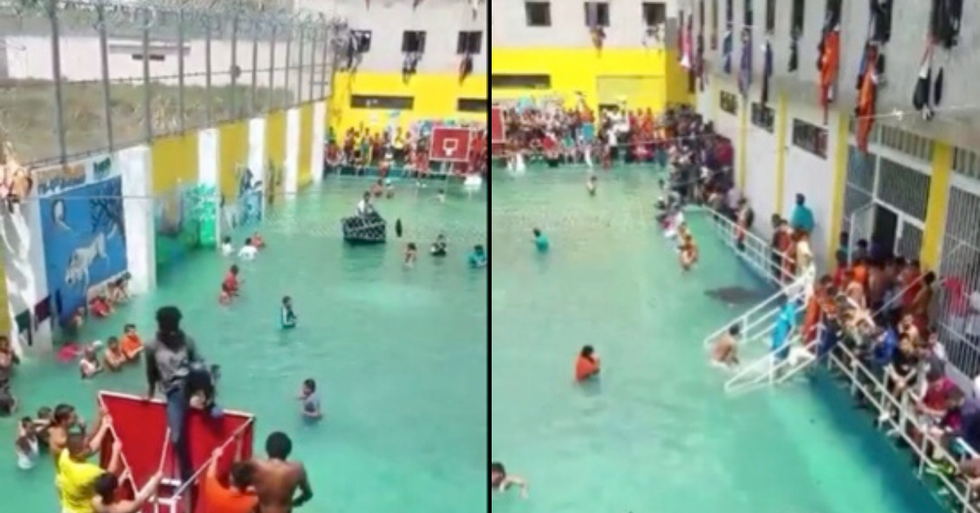 When most people think of prisoners, the first thing that comes to mind isn't a bunch of mild-mannered inmates playing go fish, it's usually grubby, scary-looking men.

But most people forget prisoners are people too, capable of kindness and affection. According to some people on Reddit, who have worked in prisons before, there can be some seriously heartwarming stories to come out of the confines of those walls.

One of the most recent stories to come out of an Ecuadorian prison is so unbelievable. It definitely shows that you can do anything you put your mind to, as long as the guards don't find out!

People can always change their ways.

The word "prisoner" conjures up lots of negative connotations, usually of, rough, scary men. But that isn't always the case.

Prisons in the U.S. are especially bad.

According to a lot of different prison guards, they have witnessed some of the most wholesome and kind acts while working on duty.

Some of these Reddit users have shared their heartwarming stories.

"While working the floor one night, one of our officers had a heart attack and collapsed. An inmate rushed over, began CPR, got another inmate to run to the control booth and get help on the way, and saved his life. The inmates cheered and applauded when the officer revived. Not one inmate in that pod tried to take advantage of the situation." - _darzy

Games are for everyone.

"I walked upon a group of 4 inmates playing dungeons and dragons. When I asked how they played without dice, I think they said that they played Rock Paper Scissors. They had an ongoing game for like 3 years." - try_new_stuff

Now that is the cutest damn thing.

"A friend of mine was a guard I heard about 2 guys on his watch that caught a praying mantis. They name it "bug." Bug was against regulations but these two guys were decent inmates so he didn't say anything. They would feed bug little things from the cafeteria and it stayed on their windowsill for months and they even taught it to high five. Bug passed away from natural causes and they got to give him a little funeral out in the yard." - OrionFerreira

Of all the things they could have done.

"There was an incident in a Swedish prison-like ten years ago where the guard forgot to lock the cells for the night. So the prisoners got out, baked brownies, watched a film and went back into their cells to sleep for the night!" - Pinknurse81

Wow, this is amazing.

"Buddy of mine used to guard at a local remand center. He told me the guard station he was posted in was a couple steps up from the hallway, probably so they could still see while sitting down, and had a ramp going down. The guards would recline a rolling office chair as far as it would go, and take turns launching out the doorway and down the ramp on it. They called it the chair luge, and prisoners would all cheer and bet on who'd make it the furthest." - djeinmein

Nothing could beat what these prisoners did.

Inmates at a maximum-security prison managed to pull off the most extravagant hack to relieve fellow inmates on a hot summer day.

Everyone was clearly ecstatic.

They managed to create a makeshift swimming pool by covering up the drains during a rainstorm.

It took place on a hot summer's day.

At the Turi Social Rehabilitation Centre in the city of Cuenca in the south-central Ecuadorian province of Azuay.

The inmates took advantage of flash floods in the area.

The strong rainstorms quickly filled up the yard due to the inmates blocking the drains.

It's been reported that the water was around one meter deep.

Hundreds of prisoners can be seen in the video swimming and jumping into the large pool, with others sat on the outskirts chatting to fellow inmates.

One man can be seen diving from a basketball blackboard!

The prison guards received backlash for apparently not informing prison authorities about the incident.

Ana Belen Cabrera is doing everything she can to make sure this doesn't happen again.

He added that the ringleaders behind the elaborate plan could face punishment.

They ordered prisoners to reopen the drains and empty the pool, Luckily for them, they got a chance to experience a bit of fun before it was drained.

The relatives of the prisoners supported their loved ones.

Due to the hot weather and apparent crowded conditions, their actions seem understandable. But then again, who wouldn't want a giant pool in their backyard.