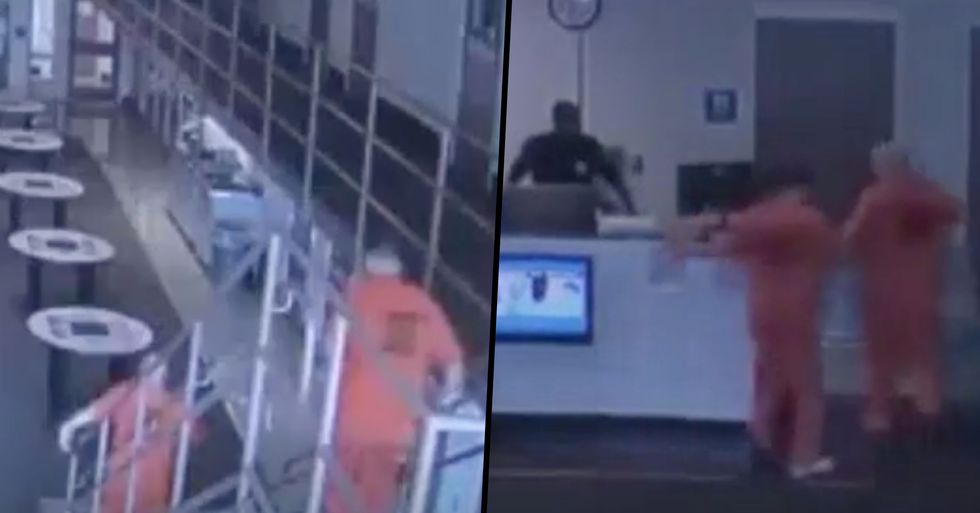 The inmates at Gwinnett County Jail, Georgia have been commended after they rallied together in order to help a police officer who was suffering a cardiac arrest right in front of them.

Keep scrolling for the full video of the heroes recalling the incident.

And prisons in the U.S. are especially bad.

And the statistics are pretty scary to see...

According to PrisonPolicy.org, the reasons for the largest rates of incarceration fall under the category of violent crimes including assault, robbery, and rape.

And now, amid the ongoing medical pandemic, things have been even worse.

While some inmates have been lucky enough to get an early release, others have been put under much more stressful situations.

The potentially deadly virus can be spread ridiculously easily...

And prisoners, who are forced to share cells with a number of different inmates, are at a huge risk of contracting the virus themselves.

So far, we have been left to simply wonder what conditions behind our jail walls must be like.

It truly must be a harrowing experience.

Other statistics have shown that there are many people in state prisons that have been convicted for less violent crimes.

And don't even get us started on unfair conviction rates. That's a whole other story.

But the moral of the story is that people can always change their ways.

The word "prisoner" conjures up lots of negative connotations, usually of people who have found themselves on the wrong path in life.

And this heartwarming story might just be proof of that.

Security footage captures inside Gwinnett County Jail in Georgia showed us that despite what people may assume about them, not all inmates are "bad people."

These 3 inmates saw a police officer in need of help and they sprung into action right away.

After Deputy Hobbs started acting a little different to his usual demeanor, Terry Loveless, Walter Whitehead, and Mitchell Smalls decided to keep an extra watchful eye on him.

And when he ended up collapsing, they knew they were right about their gut feeling.

The 3 men, who were locked in their prison cells at the time of the incident, immediately started banging on the doors while simultaneously calling out for Hobbs.

Upon hearing all the commotion, the other prisoners also joined in.

That's right, all 68 that were locked away in their cells banded together to save this officer's life. He was suffering from a cardiac arrest and bleeding from his head.

As they got louder and louder, Hobbs actually regained consciousness for long enough to press a button.

This opened the door to one cell in which 2 prisoners were in. The footage shows them running down the stairs as quickly as possible and to where Deputy Hobbsw as standing, looking very dazed.

They grabbed his radio to call in for some help and ultimately saved the officer's life.

Hobbs was rushed to hospital on July 10th and was later discharged so he could recover properly at home.

As a big thank you to everyone that helped, the entire unit was awarded with a pizza party.

The inmates' heroic actions did not go unnoticed, that's for sure. Chief Deputy, Lou Solis organized the party for them all.

Deputy Hobbs also thanked the men that saved his life, calling this ac act of kindness.

"I very much appreciate what these inmates did for me. It's a reminder to always treat everyone well."

And of course, things could have been very different if it went the other way...

Deputy Shannon Volkodav, Public Information Officer at the Gwinnett County Sheriff's Office also added that it could have been an entirely different story had the inmates not acted as they did.

"This story beautifully illustrates how heroes can appear in different uniforms. They came to his aid and we are deeply appreciative of their kind, courageous, and selfless actions. It brings tears to my eyes."

"Deputy Hobbs might not be here today if it wasn't for them. It doesn't matter what station you are at in life, you can still be a hero. We are indebted to anyone who shows kindness to anyone in our law enforcement family."

Here's a look at the security footage:

We love heartwarming stories like this one. Keep scrolling if you're in the mood for some more wholesome news.