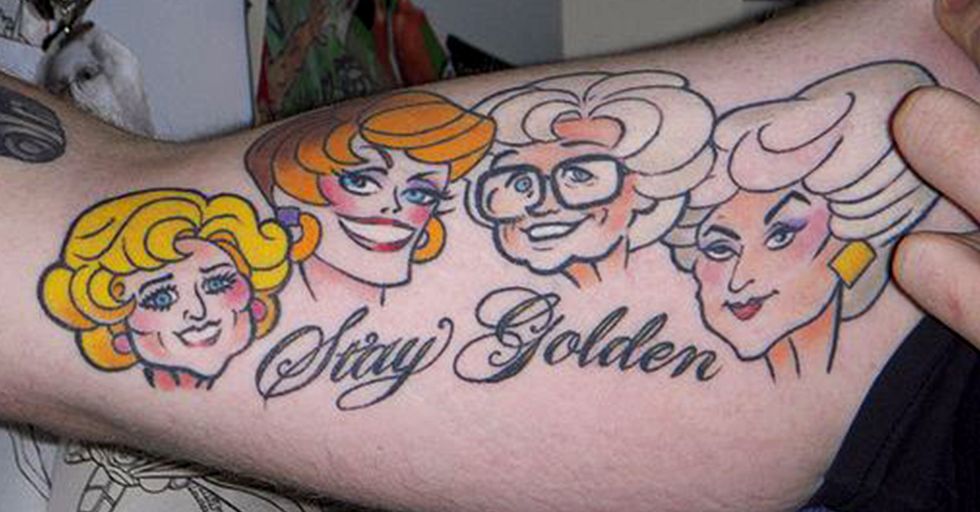 What would you do if you were a tattoo artist and someone came in requesting a Golden Girls tribute?

Why, you'd give them the best damn Golden Girls tattoo you could, of course!

Whatever your personal feelings about tattoos, there's no doubt that the women of The Golden Girls are total legends who deserve to be immortalized forever and ever in tattoo form. And boy, have they ever.

OK, whoever did this illustration needs to do more because they captured the essence of these women and the show so perfectly!

This is how the Golden Girls were always meant to be represented...floating around a perfect piece of cheesecake.

I don't quite know what's going on with Rue McClanahan's hair in this one, but that Game of Thrones-like coat of arms border is sufficiently distracting.

Sure, in real life, you might scream if four older women popped out of a giant box, but in tattoo form, it works perfectly. The next one is quite the portrait.

Travel down the road and back again

Sooooo this is a torso-length tattoo. That's some commitment right there. P.S. Betty White looks a little too much like Ellen DeGeneres in this one.

Thank you for being a friend

This portrait of Bea Arthur is magnificent. It's so photo-realistic, and I love the face she's making. Show yourself this tattoo in the mirror, and you'll stop fooling around and get down to business ASAP.

Let's be honest: The real star of The Golden Girls was that cheesecake. They loved their cheesecake, and we loved it too.

In many Golden Girls discussions, Rue gets the short end of the stick. I'm glad she's front and center here.

Is it just me or are these portraits perfectly in the style of the ones that end up on dollar bills? What I'm saying is let's put the Golden Girls on money. The next one might actually be demonic.

What! Is! Up! With! Their! Eyes! Everything else is great, but then they were possessed by the devil.

Thank you for being a dude

While I don't think this is really the saying, I do love this pen-style portrait of Estelle Getty. The artist nailed her essence!

These look screen-printed! They're so perfect. Too perfect, in fact. Why are these so perfect?

Now, this is clever. Obviously, the Golden Girls belong on Mt. Rushmore. The next one includes a great message...

This tattoo practically says, "These are the baddest bitches around, and we should all learn a thing or two from them." And I agree.

See, it's like a traditional pirate tattoo, with the banner and everything, but instead of lame pirate stuff, it has the Golden Girls on it. It doesn't get much more badass than that.

The devil and Betty White

A little-known fact about this tattoo is that it was actually copied directly from an unaltered photo of Betty White. That Halloween was crazy.

As demonstrated by this tattoo, Bea Arthur could destroy you with a single glance, and that is why she is legendary.

One thing is for sure: The effect of The Golden Girls is everlasting. Because these people will have to explain the show to their children, and their children's children, and so on and so forth. And for that, we are all grateful. Share this with the biggest Golden Girls fan you know! Love these tattoos? Keep scrolling for these super impressive tattoos of complete bizarre things. We promise you'll laugh.