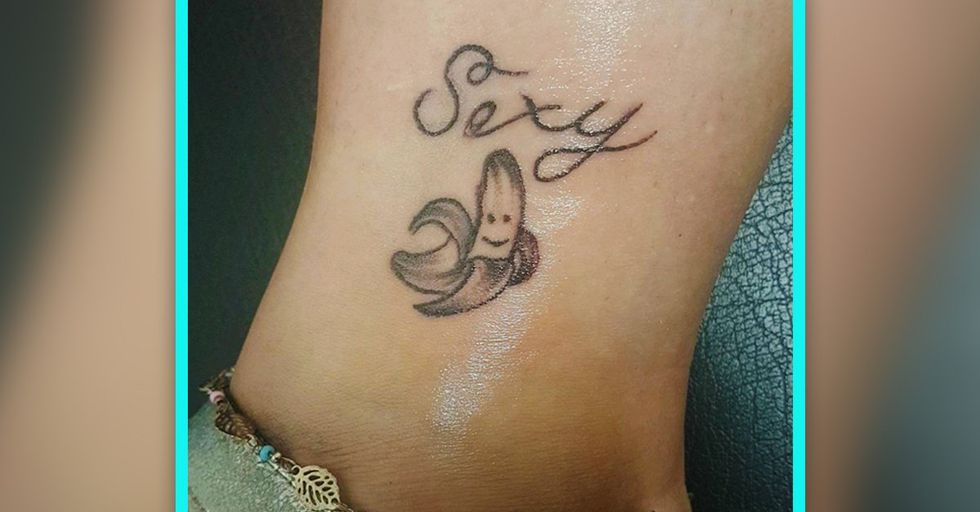 Some people choose to get tattoos on various parts of their bodies.

Some people also choose to imbibe in alcohol to the point where they get drunk.

And some people choose to do both of those things at the same time.


What could possibly go wrong? Well, as it turns out, quite a lot could go wrong. For instance, you could end up with one of these drunk tattoos:
This would be weird if it was just a tattoo of the word "Sexy" or just a tattoo of an anthropomorphized banana. The fact that it's a tattoo of both brings this to a whole 'nother level.
I mean...they're not wrong. I won't say they're brilliant, but they are not technically incorrect.

Pros: You're never *technically* barefoot, so you can't get kicked out of stores (maybe). Cons: Pretty much everything else.
Let me get this straight. You got a tattoo of a peach...that looks kind of like a strawberry...on your butt? Well, thank goodness you included the label. Otherwise, I would have been very confused.

I'm sure I don't need to tell you this, but this is (obviously) a tattoo of Charmander the Pokémon. You can tell by the fact that it looks exactly like Charmander. Also the flames help.

I get it. The hair on your toe is the hair of his head. Very clever. I guess?

Can't grow a mustache? No problem. Just get a mustache tattooed on the side of your finger. It will look ridiculous, but no one will ever accuse you of not having a mustache again.
Hey, that's a guy's nipple. And it's a pig. I feel like I've maybe seen enough of these, but there are still so many more...

I have so many questions. But they can all be summed up with one: WHY?
When it's hot outside, there's nothing better than a frosty popsicle. Or you could just have a picture of one. Your choice. (I'll take the dessert.)
Who can you blame? I can actually answer that one for you. It's the person with the tattooed knees.

If you're going to get a tattoo, you might want to consider getting something meaningful to you. Like a line from your favorite poem, or maybe your favorite song lyrics. This...isn't exactly what I meant.
Cool. This guy is obviously very, very cool. You can tell by the tattoo around his receding hairline. OK, this next one has to be an inside joke or something...
This is actually pretty cool. I only see one problem. The next time he tries to pass himself off as Art Vandelay, this tattoo may betray his true identity!
It's a star. Kind of. OK, it's supposed to be a star.
I'm not gonna lie. I legitimately like this one.

If you had told me this morning that I'd see this picture today, I don't think I would have believed you. I wish it hadn't turned out to be true.
Do you think he chose this tattoo? Or is it possible this was a prank done by the tattoo artist? The next time your friend gets drunk and tries to talk you into doing something bonkers, show them this list.