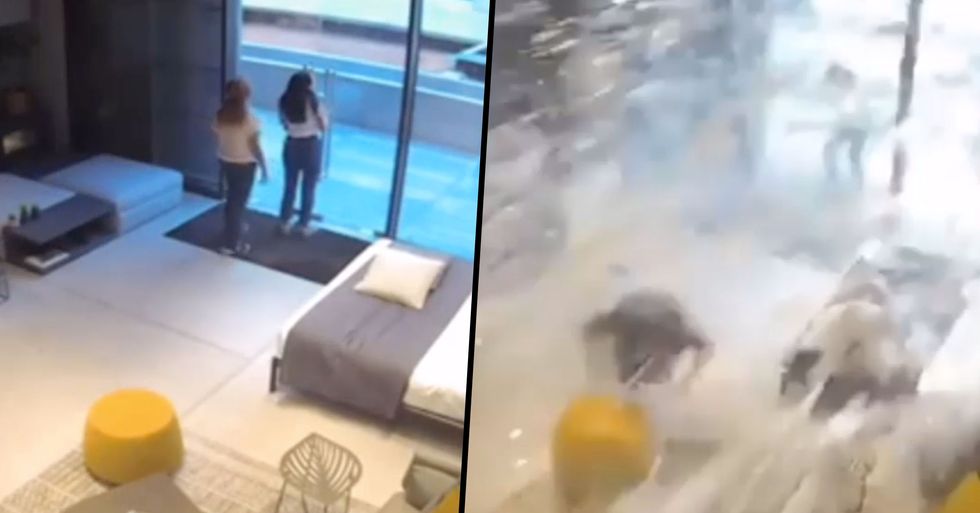 As videos continue to emerge of last week's devastating explosion in Beirut, CCTV footage shows what happened to 3 women when they got caught up in the tragic shockwave.

Keep scrolling for the harrowing video...

The latest video to emerge shows the devastating results of the blast hitting a hotel room.

And the 3 women that were staying there.

Different videos of the explosion have started to emerge...

The realization of the severity of the situation has started to slowly sink in.

According to the al-Marsad Online news website, the death toll has risen to 220, 110 people still remain missing, with a further 4,000 people suffering from grave injuries.

A search and rescue operation for those who are missing is still underway...

Sadly, the death toll is expected to rise even more.

And it was this fire that is believed to have triggered the explosion of the 2,750 tons of ammunition.

Which shows workers stacking what appears to be the tons of Ammonium Nitrate.

6 days on, footage from the aftermath continues to emerge online.

It is thought that the damage repairs are going to cost approximately $5 billion - It is going to take Beirut years to recover from this.

...Just before the explosion went off.

It was clear that 2 of the women went to look what was happening after the initial explosion happened.

Unaware of what was to come.

The smaller blasts that followed were described by witnesses as sounding like fireworks.

Which seems to have caught the attention of the third woman who joins them to look what's going on.

The two girls venture outside to get a better look.

While the third stays inside.

Sending the girl flying across the room which has been turned to rubble.

The results are pretty shocking.

It's still unknown whether the girls survived the blast.

Warning: this video may upset some viewers.

Keep scrolling for more on the Beirut disaster...