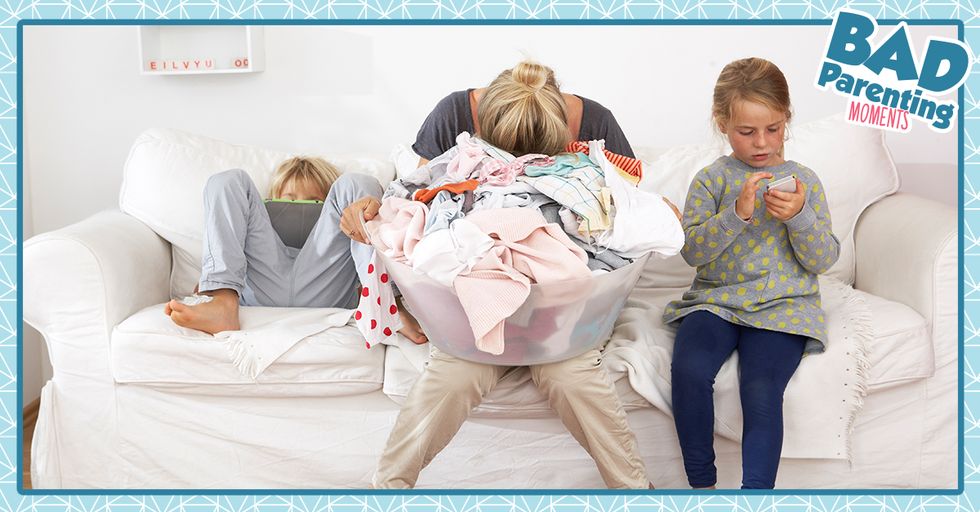 19 Pictures That Show What It's Really Like to Raise Kids

It's not easy to describe all that goes into being a parent.

It's the biggest, most important job anyone could ever have, filled with moments of frustration, years of happiness, and a surprising amount of food in places where food is not usually found.

But even that doesn't really sum it up completely.

The next time someone asks you what parenting is like, don't worry about having to accurately describe every second of your hectic, busy, lovely, food-stained life. Just show them these pictures instead. They'll get the idea.

For the indecisive child:

Real talk: This is actually an absolutely brilliant idea that I wish every restaurant would implement immediately. I think kids would like it, too.

How could you do this to him?!

Ah, yes. It's not a real shopping trip unless there's been at least one tantrum spurred on by your absolutely reasonable/life-saving ruling.

There's only one solution. 10 bucks says they never notice.

Think this will work?

Teaching kids how to read sets them up for success later in life. It also makes it so you can pull something like this every once in awhile. This next one might be a little too real.

I'm not saying you should use your child's head as a chip dip holder all the time. I'm just saying, I mean, it's right there.

Not only does this (hopefully) resolve the issue of your kids arguing; it also provides the perfect photo opportunity. Make sure you save this one for the scrapbook!

Just because they're sleeping doesn't mean your kids can't still entertain you. It's time to invest in some googly eyes.

And sometimes they leave you sweet notes!

Or notes like this. I guess this is one of the cons of teaching them how to read.

Implementing the "parent tax" on all candy and other goodies is easily one of the greatest parenting perks. This next kid proves that your little ones can sometimes be brutally honest.

Ah, kids. Not only will they create custom artwork for you; they'll also insult you in it! Gotta love 'em!

Here's some more of that custom artwork:

I mean, what did you expect? For them to spell out their name or "I Love You"? Ha! Yeah, right.

Don't fall for this one.

When you get right down to it, parenting really only requires one thing. Constant vigilance. (And I do mean constant.)

Get used to this:

Oh, you wanted to enjoy a peaceful dinner at a restaurant with your kiddos? That's nice.

It's amazing to watch children grow and constantly be learning lessons about the world around them. Today's lesson: Deodorant is not food. This next one will warm your heart.

This is also how I use the Internet. Start with a couple softball requests, then ask the real hard-hitting questions.

This pretty much sums it up:

Do you ever wish you could shout this at young people who are watching you try to corral all your kiddos at the grocery store? They'll see. Someday. They'll see.

You never know what the day will hold.

Some days it's a burial at sea for a beloved Tamagotchi pet. Other days it's a three-hour Nerf gun battle in the backyard. At least they keep you on your toes.

This is a pretty standard view:

Becoming a parent means having a whole new set of people on your phone's speed dial list. Like the pediatrician, poison control, and the plumber.

Basically, kids have no chill.

And they will absolutely throw you and your cooking skills (or lack thereof) under the bus at the first opportunity. It's a good thing they're cute. Share this with a fellow parent!