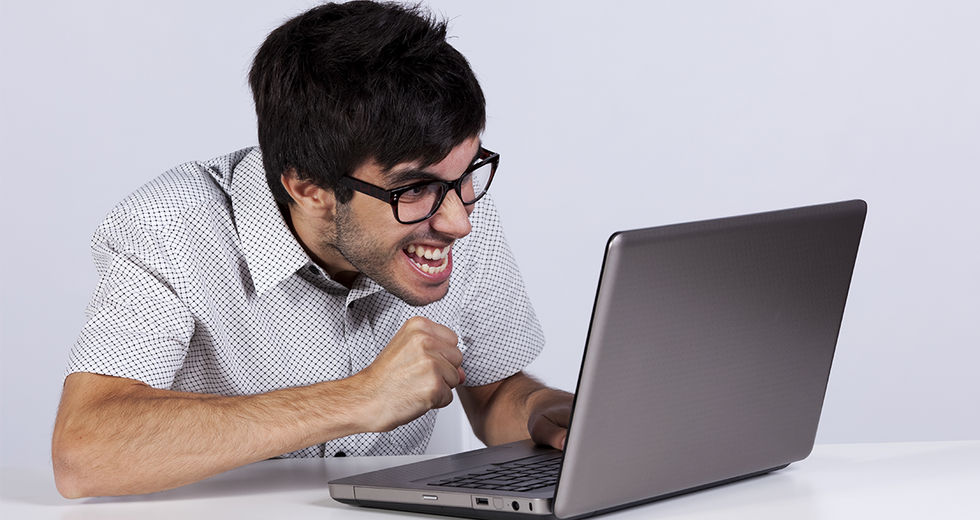 Facebook has been great for bringing so many people together – I certainly wouldn't know my cousin got married if I hadn't seen a bunch of posts about it, and I just got a notification that my childhood best friend got a very cute new dog. Without Facebook, I would have just assumed he would die alone...just kidding.

But there is a dark side to Facebook too: you have to be friends with all your relatives... including those relatives. You know who I'm talking about — the uncle who won't stop raving on Thanksgiving, or the aunt who really, truly believes she is a Jedi. These people are insane, yes, but look at the positive side — they post hilariously insane Facebook posts! Here are some of the very best posts from the Insane People Facebook subreddit.

Please note: These are all REAL Facebook posts, so buckle in folks. Things are about to get bonkers.

Exactly one year ago, my sugar daddy Brad passed away. He was 47 and died because of a heart attack and untreated diabetes. We had an incredibly toxic relationship and ultimately I wish I never met him. As horrible as he was, I am sitting here trying to dig up a good memory to remember him on this day. So here it is: Brad, you bought me my first pair of Louboutins, my first Birkin, and my first and only race horse. I still don't forgive you for taking me out of the will after you attacked me while you were on whippets. PS please don't haunt me again. - marqui444

It's important to get a good, internet-free night's sleep.

I can think of one reason he might be depressed.

My kid says he is depressed. I already took his phone away. Is there anything else I can do to get him out of this phase? - Harvie_B134

Always check your calendar before you get mad.

I do love my Apple products but personally think it's in poor taste to celebrate the release of a new product on 9/11. Apparently, those who said they'd never forget... have. THE REPLY: Cheryl it is the 10th. - AvalanchGoon

If we're just throwing out our insane opinions, I think dogs should not eat eggs.

See, to explain would be to cede control.

Still waiting to hear about my application to like my cousin's pictures.

INSANE PERSON: Can you not like my boyfriend's pictures? Thanks. REGULAR PERSON: Your boyfriend is my cousin lol INSANE PERSON: That doesn't give you a right to like his pictures. - _brodre

From a post on the above image from Avengers Endgame: You don't need to avenge this one. She could remain dusted. Smartest person in the world my butt. You morons only say this because she's black. There's no way a teenager can create and develop all this technology in Wakanda.  THE REPLY: This is a universe where people have superpowers and there are talking trees but this person thinks having a smart teenage girl is unrealistic. Okay. - Patchers

What if they snuck jerky into the reception??

From a page called "Vegan revolution": When "family" tries to guilt trip you into letting them come to your fully vegan wedding even though they are omnivores [laughing face emoji] Just for some context, some family members were told they are not invited to my wedding because we don't want to host murderer at our wedding which is supposed to be one of the happiest days of our lives. - Gelatin_MonKey

This one hurts my gamer soul.

The comment on the above picture of a smashed-up Xbox One: TRY me and this is what happens. Maybe next time you won't forget to buy my cheese VEGAN. I told you over and OVER I do NOT want real cheese!! I'm a VEGAN! And you WILL respect that! - offbrandjobs

These lizards have got to go.

From a Buy/ Sell/ Trade page: INSANE PERSON: Can the admin of this group stop deleting my post! My boyfriend has been trying to sell his lizards and your dumb admin keeps deleting it until they learn it is worth selling on ANY SITE!! So stop deleting my post of I'll report this group from Facebook for good!! REGULAR PERSON: Facebook won't do anything. This group clearly states in a pinned post that there will be no sale of pets in this group. INSANE PERSON: Too bad. I don't care what you say. He needs them gone so accept it. - _RedLynx

And with that, vaccinations were ended.

Well, our "Cards Against Humanity" box has one less card. We were playing last night and were ironically talking about how I'm against vaccinating (my friends actually converted after our conversation yayyyy) and about five minutes later I drew this card that said: "not vaccinating my children because I'm stupid." We all had a good laugh after I ripped it up. - TrueSplendor

Have you ever known a non-insane person to sporadically capital words?

It pisses me off TO NO END when I see CHILDLESS COUPLES AT DISNEY WORLD!!! DW is a FAMILY amusement park!! Yet these immature millennials THROW AWAY THEIR MONEY ON USELESS STUFF!! They have NO idea the JOY and HAPPINESS it is to MOTHERS WHO BUY THEIR BABIES TREATS AND TOYS!! This girl was buying a Mickey pretzel and Aiden wanted one but the line was very long so I said later and it broke his poor little heart and he cried. - kendi108

What are these zookeepers even getting paid to do?

On a post about the zoo: Okay, so first off, me and my family love to visit all types of zoos — elephants being my all-time favorite. When we took my daughter to see the elephants, I was mortified by the absolute lack of care and concern! This elephant had the largest erection I have ever seen!! My daughter began asking me what "that" was and she's only three! If the staff took care of those poor animals and RELIEVED THEM then maybe my three-year-old daughter wouldn't be asking about giant elephant erections! - tonderthrowaway

It didn't help that the cashier was chanting "THE END OF ALL IS NIGH; REPENTANCE IS FOR FOOLS AS WE ARE ALREADY LOST" over and over.

On a post about a vegan bakery: The bakery items were awesome. My only issue was that as a Christian, I felt completely uncomfortable and under attack in there spiritually. The place is filled with a satanic aura and if you have a sensitive spirit, you will definitely feel it. The food was good but I will never go back. - Frankfurter77

Don't tell your children what they can and can't grow up to be!

Asking my friends to all chip in on the "jumping in the grave" deal for my birthday.

Do you want to boost your funeral? Hire me, the professional mourner to come cry at the funeral. Below are the "Summer Special" prices: 1. Normal crying $50 2. Bahamian hollering $100 3. Crying and rolling around on the ground $150 4. Crying and threatening to jump into the grave $200 5. Crying and actually jumping into the grave $1000 - FoxyThePirateHA

Daughters must be protected at all costs.

I'm looking forward to my daughter and her fiance visiting for the weekend. Her room is on the right and the guest room is on the left. You can see where dad will be sleeping. And yes, that is a 12 gauge shotgun propped up in the corner. - masochistic__kitten

Isn't this what you guys want?!

This sounds like a real thing that a child would say and not a bizarre cry for attention.

Y'all my son woke me up out my sleep crying and said: "Mommy I know you tired of working trying to make it better for me and my sister, I'll go to work for you today." This made me cry, he's only one. - Bmchris44

Bring your dog to the vet right now.

From a "Keto For Beginners" page: This is going to be an odd question, but anyone doing Keto have pets that have started acting odd towards you? Our lab for the past 24 hours won't leave our side, has been pacing around the house, panting, wanting to go outside — which is not like him — whining. I'm wondering if we are sending out some weird scents that he doesn't like. - bakleinert

I remember my high school debate coach giving us this advice.

I suck at arguing. Once I feel like you're louder than me, I'm gonna hit you. - nasturcissist

Wonder if my HMO covers a bunch of different oils?

I have to laugh at all the people who say essential oils aren't beneficial to health. Two years ago, my friend's aunt was going through chemo for breast cancer and the doctors said she only had months to live. I wouldn't accept this diagnosis and after using my own research I came to the hospital and explained to the doctors what I had found. They allowed me to put drops of eucalyptus and lavender oil into the chemo drip and the literal next day I got a phone call from the hospital telling me the tumor had shrunk nearly all the way away and that her cancer wasn't terminal anymore. They said it was caused directly by the oils I administered. My friend's aunt and I hang out to this very day and she brags to all her friends about how I saved her life. - bunnypoop92

Instead of saying "do your research," why not just say "you are right and I am a crazy person"?

Quick and to the (nonsensical) point.

What sucks about cameras is that they are literally everywhere and in everything.

My neighbor has this flower peeking into my backyard. I couldn't get close enough to see if there is a camera hidden inside. Is this even legal? - Snail-Juice

This is all kinds of concerning.

INSANE PERSON: Just got told the vaccine that the doctor gave my son has AIDS in it! I knew better than to trust this corrupt health system. THE REPLY: What? You don't even have a child. You've been single all your life and you're like 17. - foreverwasted

"Hey Facebook, I'm a monster. How can I help those hurt by my awful crime?"

The other day I was talking to my neighbor and he was telling me how his Visa had been expired for three months but he didn't or couldn't apply for a new one, don't remember. Guy has been working under the table and isn't even paying taxes. I know he's doing it to provide for his kids but I still got mad. I reported him to ICE and they just picked him up. His kids were crying and I offered to watch them until a relative could get them but CPS showed up and grabbed them. Their mom passed away last year and now their dad is getting deported. I wish there was something I could do to help. Any suggestions are welcome and appreciated. - babyvamp_

Where hath our society's honor gone?