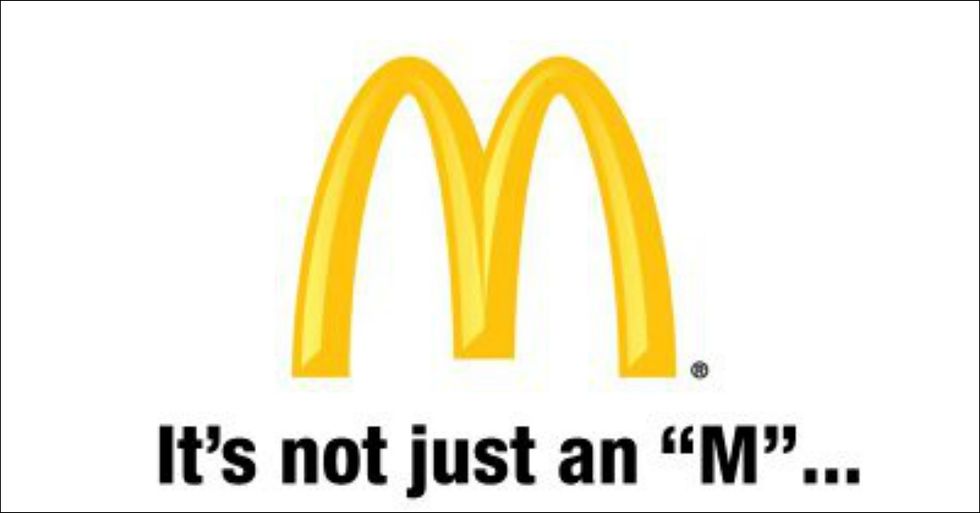 It's no secret that companies try to trick us all of the time, whether it’s with “new and improved” claims or just bright, shiny packaging. But there are also more subliminal — and clever — ways that they go about hoping to win your brand loyalty.

That's why some of the world’s biggest companies pay designers, advertisers, and psychologists to dream up creative logos that convey an image you might not initially see — everything from a pair of McDonald's "breasts" to a font-filled fiesta.

But once you see it, you'll wonder how you were missing it for so long.

This is one of the best known logo images, but just in case you’ve missed it, look between the “E" and the “x." In the white space there’s an arrow that subliminally represents speed and precision.

via: The Culinary Scoop

Here’s the scoop: Famously known for its 31 flavors (supposedly so that a customer could have a new flavor every day of the month) Baskin-Robbins makes it known in their logo. See? It's not just a B and an R.

This Wendy’s logo appears to say the word “Mom" in Wendy’s collar, suggesting that their cooking is like Mom’s home-cooked meals. You know, if mom made square hamburgers and served ketchup in small paper cups.

Zoom your eyes over this racing logo and you’ll see the empty space in the middle creates a number “1″ for “Formula 1.″

The white space in this logo pops out and reveals a gorilla and a lion staring each other down. While the ape is quite a beast, my money would still be on the lion. He is king of the jungle, after all.

Not only is the Amazon logo smiling, but there’s also an arrow starting at the “a" and ending on the “z" to indicate that Amazon has everything from A to Z that you don’t need but will buy so you spent enough to qualify for free shipping.

Because giving (and saving) should make you happy, the “G" in “Goodwill" is zoomed in and cropped to form a smiling face. Say, "cheese!"

The Chick-fil-A logo incorporates a chicken into the “C." Although this isn’t very hidden, it is still pretty clever, more so than their attempts to have people believe that their meals are nutritious.

There is a cyclist in there, literally, on “Tour." Notice how the “o," “u," and “R" all come together along with the yellow dot to form the image. Immediately after posing for this logo, he was taken in to pee in a cup to be tested for performance enhancing drugs. Results are pending.

Ever notice that Adidas' symbol looks like a mountain? Well, that's exactly what it's supposed to mean. The three stripes, which was part of the original logo in 1967, never really meant anything. It was just supposed to be unique. In the '90s, though, they slanted the stripes so that it would represent a mountain, which stands for the obstacles people need to overcome — probably while wearing Adidas sneakers.

Considering they’re often referred to as “the Peacock Network," among other things, this one is rather obvious. But the symbolism of the colored feathers represent each division of NBC (from when the logo was first designed, as there are more now) and the head of the peacock is looking right, meant to symbolize looking forward (to a show that can compete with Game of Thrones and Modern Family).

Feel like playing Pac-Man? All you have to do is tilt it a little to the right and then shift the “nose" upwards. Life is good.

The negative space in this logo reveals New York’s iconic skyline of tall buildings between the legs of the giraffes which, quite honestly, looks a little painful to me.

Want a free Hershey Kiss? Check the front of the bag. Okay, it’s a bit disappointing that it’s not actually a piece of chocolate, but if you look between the “K" and the “I" you just might find an extra one, at least visually.

Unilever produces about a gazillion products, which makes it hard to keep track of everything they do. Lucky for us, there are symbols for nearly everything they make right in their logo.

Considering the point (pun fully intended) of Pinterest is for users to “pin" things like projects and recipes they’ll never create to virtual boards, it makes sense that the logo incorporates a pin into the letter “P."

This logo actually has two hidden messages. First, it features an N and a W in negative spaces. Second, the triangle in the circle points northwest as if it's a compass.

This one might take some work, since the hidden image is not one most Americans would be familiar with. But hidden in the Coca-Cola logo is actually the flag of Denmark. This wasn’t the original intention, but once they discovered the Danish flag, which has been named the happiest country on Earth, they set up a media stunt in Denmark’s biggest airport where they welcomed people with flags. Why they didn’t welcome them with Coke is still a mystery.

While you were shoving chips in your face you might have missed that there was an actual fiesta going on in the Tostitos logo. Yes, the two t’s are partying over a bowl of dipping sauce that dots the “i." Ole!

The Toblerone logo contains the image of a bear hidden in the Matterhorn mountain, which is where Toblerone originated. And because if you live in the mountains with bears, you need good chocolate to survive.

At first all you see is modern typography, but there is actually a hidden meaning of Sony’s VAIO logo. The first two letters represent an analog signal and the last two are the 1 and 0 of the digital world.

The hidden logo with an elephant’s silhouette is defined by a giraffe and rhinoceros; the negative space of the animal’s hind legs are cleverly shaped by the twin spires of Cologne Cathedral. There is no explanation as to why the elephant has a star for an eye, but I suppose it’s a nice touch.

This former NHL team is no longer in existence, but the logo was so clever that it warrants a mention. The “H" can be spotted in gray and the “W" in green, but did you notice the blue tail of the whale? They shoot, they score!

Roxy, a clothing line for girls who love surfing and snowboarding, is owned by Quiksilver, and the logo consists of two Quiksilver logos rotated to form a heart. Awww...how sweet.

Using your “razor sharp" focus, you will notice that the “G" and “I" have been perfectly cut to represent the sharpness and precision of the razors.

IBM’s logo has a hidden message for the whole world hidden in the Big Blue logo that represents it’s company. The white lines passing through give the appearance of the equal sign in the lower right corner, representing equality...or that your printer is running out of ink.

Everyone knows about the Golden Arches and that the “M" stands for “McDonald’s." But what you might not know is that in the 1960s design consultant and psychologist Louis Cheskin said customers unconsciously recognize the logo as “symbolism of a pair of nourishing breasts." I think the dude just needed a date.