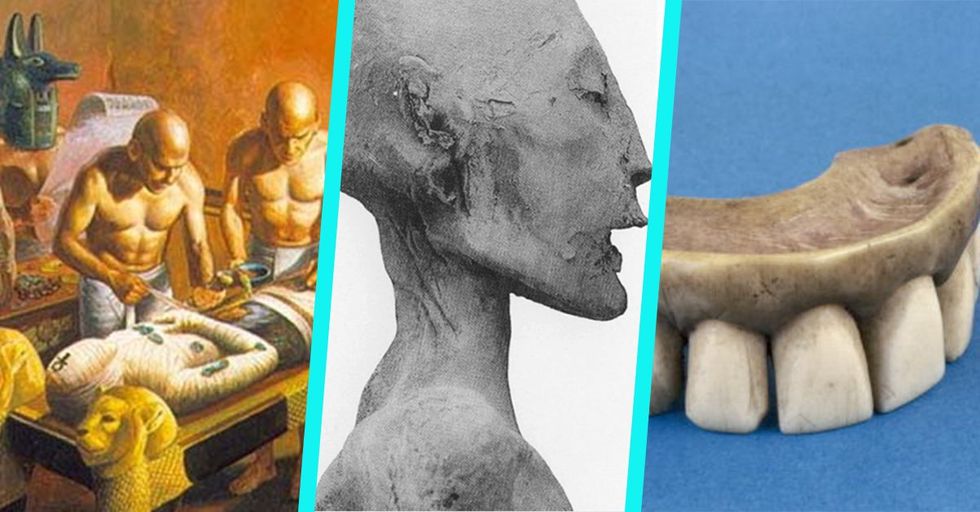 40 Insanely Creepy Historical Facts They Never Taught You in School

Remember studying for your world history tests in school? You may have hit on the major points of humanity's past, but there are plenty of gory details to be uncovered, ranging from fascinating to absolutely gruesome. Take a look at these 40 creepy facts about history details that school definitely skipped over!

Witch-trials have a long, dark history.

You’ve probably heard of the Salem witch trials, but the hunt for witches goes back much further than that. One anthropologist has estimated that, in medieval times, as many as 600,000 "witches" lost their lives.

Animals were also regularly put on trial in the medieval ages—and given a death sentence.

During America’s Dust Bowl (in the early 1930s), sewing flour sacks into clothing became quite popular. So popular, in fact, that flour companies began selling flour in decorative bags intended for future repurposing into clothing.

In the 19th century, before medical professionals had the tools to discern comas or paralysis from death, the fear of being buried alive was very real. Patented ‘safety coffins’ were invented so that mistakenly buried people could alert those above ground to their predicament.

During Pope Gregory IX’s term, he declared that cats were associated with devil worship, resulting in their mass extermination.

Ironically, it is believed that this large-scale expunging of felines helped to spread the Bubonic Plague, which ravaged Europe in the 1300s and killed over a hundred million people. No cats meant the rat population (which carried the plague) ran wild.

The most ineffective senator ever:

Roman emperor Gaius (also known as Caligula) went out of his way to humiliate the Roman senate by making one of his favorite horses a senator.

The Europeans’ arrival in the Americas caused the Native American population to drastically decline from approximately 12 million in 1500 to roughly 237,000 in 1900.

Cannibalism was a health fad once upon a time.

Wealthy Europeans in the 1500s and 1600s ate parts of corpses, believing them to have medicinal properties. Blood, power ground up from the human skull, and human fat were all used to cure various ailments.

Tomb raiders even desecrated Ancient Egyptian tombs to steal the remains of mummies, which the aforementioned wealthy Europeans proceeded to consume.

President Einstein was almost a thing.

In 1952, Albert Einstein could have become the president of Israel. He declined the offer, however.

The shortest war on record lasted for 38-45 minutes in total. The Anglo-Zanzibar War began and ended on August 27th, 1896.

Napoleon Bonaparte was defeated by bunnies.

In a celebratory rabbit hunt after concluding the War of the Fourth Coalition, Napoleon was swarmed by the very rabbits he intended to hunt. He was forced to make an escape via carriage (though a few of the bunnies managed to follow him into the coach). And you thought Waterloo was humiliating!

Dentures have a disturbing history.

Before proper dentures came about in the mid-1800s, dentures were crafted using teeth taken from the mouths of deceased soldiers.

King Tut’s parents were recently confirmed to be siblings. DNA from the mummified remains of Tut’s mother revealed her to be both mother to Tut, and sister of his father Akhenaten.

During World War I, Jackie the baboon was awarded a medal and promoted to the rank of corporal.

This funeral was extremely unconventional.

Mexican general Antonio López de Santa Anna held an entire state funeral for his leg after it was amputated.

The "New England Vampire Panic" was an event in the 19th century where people thought that "consumption" (i.e. Tuberculosis) was actually the result of vampires. It got to the point where people would dig up those who died of Tuberculosis and stake them through the heart. -TheManicMonocle

Human sacrifice was a common practice among the Aztecs.

Over 20,000 people were sacrificed at the ancient temple of Tenochtitlán.

This woman may be Lady Luck in the flesh.

Anna Mae Dickinson is quite possibly the luckiest woman ever. She survived the sinking of both the Titanic and Lusitania, the Hindenburg explosion, the bombing of Pearl Harbor, and, when she was 97, the destruction of her apartment during the 9/11 terror attack.

Medicine has come a long way.

From 1898 to 1910, the Bayer pharmaceutical company marketed and sold heroin as cough medicine and non-addictive substitute for morphine.

via: The Quack Doctor

The supposed un-death of Rasputin:

This historical figure was the gruesome inspiration behind Dracula.

15th century Romanian ruler Vlad the Impaler consumed the blood of his enemies with meals. He was born in Transylvania; combined with his disturbing habits and the family name ‘Dracula,’ Vlad provided the inspiration for Bram Stoker’s gothic vampire novel.

Stalin ordered photographs to be revised, editing out people who forcibly went missing (were murdered).

Speaking of Stalin, he and his regime are responsible for up to 15 million deaths between 1929 and 1953, though the exact number could not be determined.

The Democratic Party’s symbol is a donkey because in 1828, someone called Andrew Jackson a “jackass." In their defense, he totally was, but the donkey became a democratic symbol as Jackson’s way of shooting back at the name-caller.

Some people in the Victorian Era made jewelry out of their deceased loved ones. Teeth, hair, and bone could all be incorporated into “memorial jewelry."

President Lincoln’s assassination had a lingering effect on one survivor of the attack.

Major Henry Rathbone shared Lincoln’s box, along with both of their wives, when Lincoln was shot. Rathbone tried to stop John Wilkes Booth, got stabbed by the assassin, and 18 years later Rathbone shot and stabbed his wife to death in the same manner. Rathbone spent the rest of his life in a mental institution.

Countess Elizabeth Bathory was named by Guiness World Records as the most prolific female murderer, and is basically the female counterpart to Vlad the Impaler. She reportedly killed at least 80 young women between 1585 and 1609—although personnel at her trial estimated that roughly 200 bodies were removed from her castle, and another unverified testimony passed down through the years suggests the number of victims was upwards of 650.

John Adams and Thomas Jefferson, two founding fathers who were present for the signing of the Declaration of Independence (which Jefferson wrote) died on the anniversary of their nation’s birth. They both passed away on July 4, 1826, exactly 50 years after the original Independence Day—July 4, 1776.

16th century Canadians had the wrong idea about birth control.

In Canada in the 1500s, women imbibed a formula that was supposed to prevent pregnancy: a mixture of alcohol and ground beaver testicles. Not very effective, obviously.

These snowmen weren't your average Frosty.

In 1511, the people of Brussels, Belgium built over 100 snowmen in lewd or ridiculous positions. Amongst the snow-mermaids and snow-unicorns, there were also fornicating snow people, a snow-nun seducing a snowman, and one snowman ‘peeing’ into the mouth of another. Believe it or not, the townspeople used the construction of these snowmen as a form of protest.

Joan of Arc was unknowingly allied with a serial killer.

Joan of Arc was a legendary badass, better than the stuff of legend because she really lived, fought, and died for her beliefs. One of her allies, however, was one of the most prolific serial killers in history. Gilles de Rais, one of Joan of Arc’s ‘companion-in-arms,’ began murdering young children after her death and his own retirement from the military. Before he was caught and executed, he killed between 80 and 200 children—though a few have suggested the number goes as high as 600.

'Trial by Ordeal' used to be a method of judging innocence or guilt in the Middle Ages. One method? By sticking one’s hand in boiling water. If the wounds were completely healed within three days—which would indicate a sign from God—that person was innocent. You can imagine how often that actually happened.

The carnivorous Venus flytrap plant is native only to North and South Carolina. It can’t be found naturally anywhere else in the world.

Ever wonder what happens if you crash into a wall at 185 mph head on? Gordon Smiley's 1982 Indy 500 qualifying crash is exactly that. Dr. Steve Olvey is the source of this account. -HammableOfCarthage “While rushing to the car, I noticed small splotches of a peculiar gray substance marking a trail on the asphalt leading up to the driver. When I reached the car, I was shocked to see that Smiley's helmet was gone, along with the top of his skull. He had essentially been scalped by the debris fence. The material on the race track was most of his brain. His helmet, due to massive centrifugal force, was literally pulled from his head on impact...I rode to the care center with the body. On the way in I performed a cursory examination and realized that nearly every bone in his body was shattered."

Arsenic was used to clear up facial complexions.

As late as 1902, edible wafers containing arsenic were sold to improve any facial imperfection—you know, because that’s what you think of when you think ‘arsenic.’ The wafers were supposed to be most effective with constant use, which definitely didn’t help its users’ health.

The first major outbreak of syphilis occurred in 1494, and before medicine, it “caused flash to fall from people’s faces and lead to death within a few months." Basically, whole parts of a person’s body could rot away from the disease, making it a fairly common sight to see someone with syphilis shambling around like the living dead.