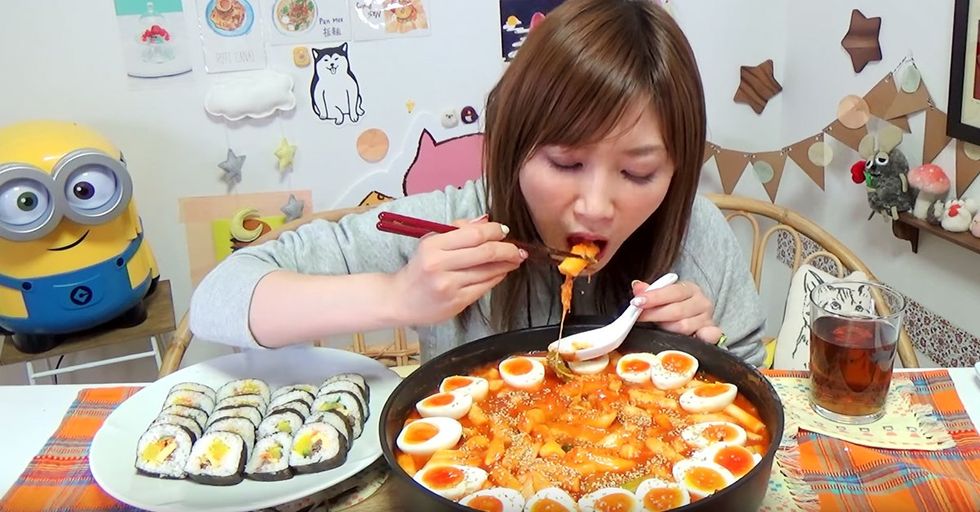 In a perfect world, I would get paid to eat as much food as I want. To my surprise, I realized that this job already exists. Mukbang (mook-bong) is an online sensation spreading throughout Korea and now, all over the world. Mukbang loosely translates to "eating broadcast" and people are obsessing over these videos. It consists of people filming themselves eating large amounts of food, and well, that's it.

In South Korea, it seems like watching people eat is a very acceptable obsession to have. For YouTubers, it can be a serious career. Some Mukbangers (yes, that is what they are called) have even quit their day job to work full-time munching in front of a camera.

Sound too good to be true? That's what I thought until I went deep into the world of Mukbanging and found that this is one of the weirdest, most intriguing trends on the internet today.

Here is one example of Mukbang, just so you can get the idea of how weirdly popular the trend is. This one video has over 4 million views.

How did Mukbang start?

This isn't necessarily a new trend, but people are definitely paying more attention to it globally, and trying it out for themselves.

We've all got the munchies

In 2015, VICE did a special called "Munchies" where a reporter talked with popular Mukbangers in East Asian and got the inside scoop on what makes this trend so captivating. After that, more people began watching and obsessing over the latest phenomenon and Mukbangers who broadcast.

People are eating this up

"I am so obsessed with how you eat and I don’t know why," commented one viewer on a Mukbang video. It seems like viewers find comfort in the idea of watching others eat, and talk.

In South Korea, eating is viewed as a communal part of your day. They don't have a large fast-food culture like some places we know *cough AMERICA*, so eating alone or in your car is less common.

Simon Stawski, a Canadian YouTuber who moved to South Korea in 2008, tried the trend with his wife on their YouTube channel. He has one theory as to why Mukbang is so popular. "For those that can't eat with others, they'll more than likely stay home to eat alone," Stawski said to TODAY Food. "But they'll still have the urge to socialize while eating, which is what I think mukbangers replicate."

I get it, no one wants to feel as if they are alone while enjoying a nice meal. Sharing your delicious food with someone else can be half the fun of eating, especially if you're into sharing.

Q&A while you stuff your face

On top of feeling social while you eat, the Mukbang trend also focuses a lot on interacting with the viewers through a series of question and answers. Most of the time, the Mukbang is featured on a live video stream, so that the Mukbanger can answer your questions in real time while enjoying their feast.

Or, they tell a crazy story to keep their viewers entertained while simultaneously inhaling all of their food.

You can invite the whole family

Mukbangs can be a family affair. This Mukbanger asked her followers to send in questions to answer in a video featuring her family members.

That's a lot of food

What makes Mukbang so tempting to watch is that the broadcasters are usually eating large amounts of food (like feast sized portions). Although it started in Korea, the types of food eaten in videos are quite random. A quick YouTube search shows a lot of noodle-based foods (mostly ramen), but then you'll find ones like these, where the main meal is McDonald's.

There's no limit to the type of food

Sometimes, it's a whole lot of Wendy's, like in this woman's Mukbang. Also, I had no idea Wendy's had baked potatoes until this video. Wow, I am learning so much from Mukbang.

There's a little bit of ASMR

Mukbang is also an ASMR thing. If you haven't heard of ASMR yet, it's basically that tingly feeling you get because of something you see or hear. It stands for Autonomous Sensory Meridian Response and people love it. Look it up on Instagram, you'll find some weird things. It's not for everyone, but nonetheless, it's another big trend.

Here's a video that people are most likely watching for the sounds, not the food. Warning: This is not a video for those who are easily irked by loud, mouth-open chewing.

Here's another ASMR-focused video, where there's no talking but lots of crunching. Yes, it's weird, but it seems to have ONE MILLION views! I'm telling you, people love this stuff.

Did I mention that's a LOT of food?!

This guy is eating 5,000 calories in ONE meal. This can't be healthy right?

So how do these people stay in shape when they are consuming thousands of calories each day, just for the sake of YouTube views?

The more calories the more views?

Erik Lamkin, AKA Erik the Electric on YouTube, has videos where he eats over 100,000 calories in one video. Most of his Mukbang videos are insane amounts of food with high-calorie counts.

So how does he stay so fit while eating so much? It seems impossible with a diet like this, but Lamkin credits powerlifting and cycling that help him maintain a healthy body weight. I guess it is all about balance.

You have to see this for yourself

Here's that video I was talking about where Lamkin eats 100,000 calories and it's hard to look away.

Afreeca TV's BJ Banzz, another Mukbanger, follows a strict workout schedule as well to stay healthy. He revealed in his personal blog that his workout regiment is actually pretty intense; he works out for hours at a time, doing a lot of aerobics and weightlifting.

Okay we can't all be fit Mukbangers

Meanwhile, this is me, barely able to walk after just looking at these videos.

Show me the money

Some Mukbangers have quit their day job in order to pursue full-time Mukbanging. My question is: how do they even make money off of this? And how much are they really making?

Ads bring in a good chunk of revenue, but MommyTang, an American YouTuber who does a lot of Mukbang videos, says there's more to it than that. "Once you get popular, you can make close to $100,000 a year here in the U.S.," she said in an interview, "There are many endorsements, ebook, and product review payouts."

Yup. Some Mukbangers make six figures. I am just as shook as you are.

In South Korea, where Mukbang originated, the form of payment is different. Since most of the Mukbangs are live streams, viewers can give digital donations which then can be cashed out by the Mukbanger.

Park Seo-yeon a Korean Mukbanger, reportedly made a monthly average of $9,400, after broadcasting for up to three hours a day in 2014. Imagine where she is at now, rolling in the dough and rolling in giant piles of food...

Of course, as with every social media trend, there are some negatives to Mukbanging; it's not all food and fame.

Some fans tune into Mukbangs to curb their own hunger or to feel a sense of satisfaction watching others eat things they can't. Others (like me) watch with the intention of feeling some serious cravings afterward.

"The nature of Mukbang videos can trigger disordered eating patterns in susceptible viewers," said Erin Palinski-Wade, RD in an interview with TODAY Food. So if you consider yourself "susceptible", take some caution before watching hours and hours of people overeating.

If you were still not sold, our girl Dua is potentially making some new rules of her own by trying out Mukbang.

Wait, I love this

Here's the video posted to Twitter of the "IDGAF" singer stuffing her face with a dumpling and it's probably the cutest thing ever. I don't think anyone would be mad if she made more of these videos.

Ok so even if she isn't actually going to do Mukbang videos because she's a little busy being a full-time superstar, her fans were still living for this.

🗣 stop eating while recording a podcast/video if it’s not a mukbang/amsr. Not everyone wants to hear you smacking on food!!
— I Make Clothes (@I Make Clothes)1537211780.0

Mukbang is not for everyone, and that's totally okay. If you don't want to watch an hour of someone eating insane amounts of food, no one will judge you.

If you didn't know about this trend before, I hope your mind has been blown by the Mukbang lifestyle. Share this with your fellow foodies and spread the news about Mukbanging.