Inside Whittier, Alaska, the Town Where Everyone Lives in the Same Exact Building | 22 Words 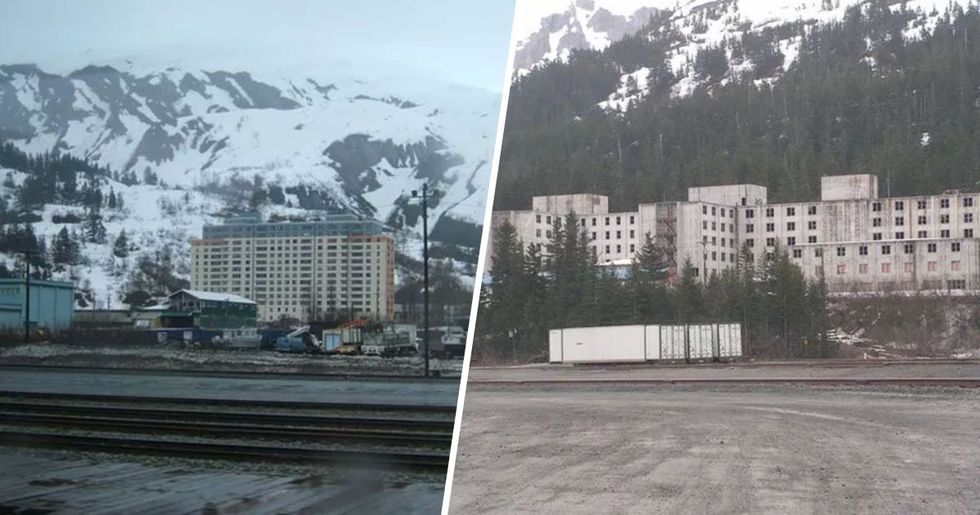 Inside Whittier, Alaska, the Town Where Everyone Lives in the Same Exact Building

If you think you're from a small or insular town, have we got a shock for you. There's one town in Alaska where there are just two hundred and twenty residents - and the entire population lives in the area's sole building.

Located sixty miles south of Anchorage, Whittier, Alaska is sometimes referred to as "the town under one roof." And if you think that sounds claustrophobic, the town can be accessed only by boat - or a creepy one-way underground tunnel. In fact, some residents have not left the town's building in years.

Sound weird? You haven't heard the half of it yet.

When you think of small towns, it's likely you have a certain image in mind.

Small towns tend to be seen as cute, wholesome, and perhaps just a teeny bit dull. But there's one which is unlike any other.

This is Whittier, Alaska.

And it may be one of the strangest places to live in the USA.

Such a remote area of the world is naturally stunning and unspoiled by us dumb humans. But that's not why people are talking about it.

Whittier is not exactly populous. In fact, at the last census, the population stood at just two hundred and seventeen. Now that's a small town.

Even odder, every single one of Whittier's inhabitants lives in the same building, known as Begich Towers. In fact, this condominium is the only building in the whole town. No wonder Whittier is known as the "town under one roof!"

Whittier is actually named after the glacier it sits beneath.

Named after abolitionist and poet John Greenleaf Whittier, it was undeveloped until the '50s.

There is technically another building in the town.

The Buckner Building is an old military facility which has been disused for decades. In fact, there are now rumors it's haunted.

In 1964, the town was struck with one of the worst earthquakes ever recorded.

On March 28th of the year, the Good Friday Earthquake hit the town. The biggest seismic event in US history killed thirteen Whittier residents with a tsunami, and caused an estimated $10 million in damage.

Aside from natural disasters, life in Whittier isn't easy.

For six months of the year, it snows daily. For the other six months, it rains - making Whittier the wettest place in the entire USA, with over a thousand times the national average of rainfall.

And if all that wasn't enough to deal with?

Residents of Whittier also have to share their living space with every other person in town. We're getting irritated just thinking about it.

For a long time, Whittier was only accessible by boat.

And with such consistently temperamental weather conditions, that must have been tough.

A train tunnel was building during World War II.

It has since been converted into a tunnel for cars, making access to Whittier (marginally) easier. The underground tunnel is over thirteen thousand feet long, making it the second-longest in North America.

But that's not the only reason it's hard to traverse.

The tunnel is also a single track, meaning traffic can only go in one direction at a time. During operational times, this changes every half an hour.

The tunnel is only open between 5:30 in the morning and 11:00 at night, meaning during nocturnal hours, Whittier is basically inaccessible.

Once you get into Whittier, where do you go?

Well, it won't surprise you to know there aren't many options - basically, Begich Towers, or ... Begich Towers. Not only are there apartments for residents in the condo - but everything else the town needs, too.

The condo houses the vast majority of the town's residents.

But it turns out, Begich Towers is way, way more than just an apartment block.

The top two floors are actually for guests.

Many curious travelers want to experience life in Whittier, and so the top of the towers is a bed and breakfast. It's also the most luxurious part of the accommodation.

The view from the top is pretty impressive.

The unique nature of the town, alongside the incredible natural beauty Whittier has to offer makes it understandably popular with tourists.

At the bottom of Begich Towers?

This is where you'll find the rather petite grocery store. It has all the basic essentials - but for anything particularly special, residents will have to travel further afield.

Whittier residents can also rent videos from the store - with newly released displayed on the whiteboard.

That's not all, though.

There's also a church, a police department, a post office, a convenience store, and a medical clinic. Truly, this building has it all.

Also in the basement?

There are special storage areas. Apartments in Begich are a little on the pokey side, so having some extra room is a must.

There's even a school down there.

For Whittier kids, there's really no excuse for being late or missing class.

Here's a look inside a Begich apartment.

While they can hardly be described as spacious, there's an odd charm to these abodes.

With freezing temperatures outside, it is rather inviting to snuggle down and watch some TV.

Waking up to this view would be a pretty great start to any day.

Another bonus to life at Whittier?

There is a reindeer pen right in front of the condo block - just in case you were in any doubt you were in a winter wonderland.

The pen can be seen from the apartments.

And that's not the only wildlife available for Whittier residents (and tourists) to enjoy.

There's a ton of cool animals in the Whittier area.

There are hardy mountain goats on the glaciers, plus in clear weather whales and seals can be spotted in the water.

But the best thing about Whittier?

Many residents claim to love the sense of community which comes from living in such tight-knit and remote quarters. In fact, some love the Whittier vibe so much they haven't left the building in years!