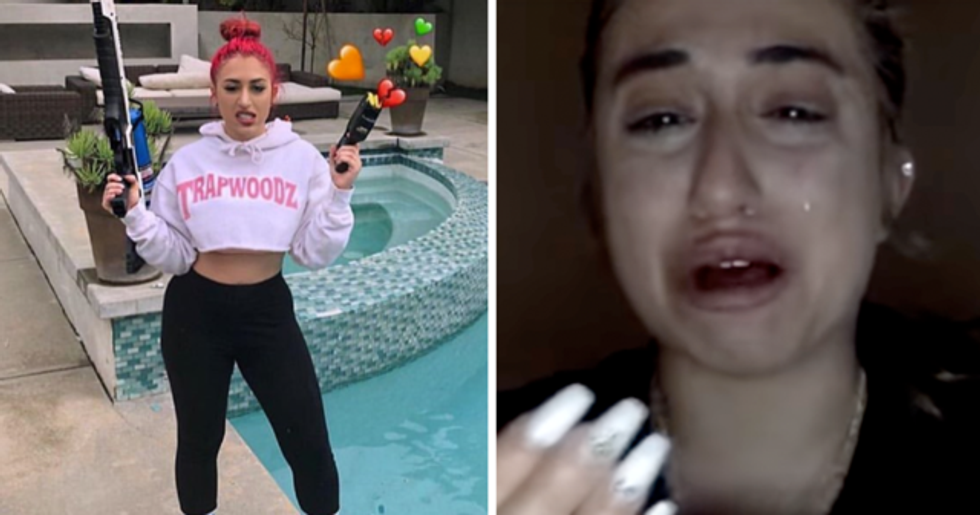 For many of us, Instagram is so much more than a social media app - it's becoming more like a lifestyle. And this more than true for the elusive influencer: a person who makes Instagram into their actual career. People can make a viable living off the app these days, selling anything from flat tummy tea to hair extensions.

But what happens when all that goes away? Well, one Instagram influencer had to face her biggest fears this week when her account was mysteriously deleted - let's just say, she didn't take it so well. She shared an emotional video to YouTube after having issues with her popular Instagram account. And her biggest fear about losing her Instagram has really got the internet's eyes rolling.

We've got the video right here for your viewing pleasure, plus the best of the internet's reactions to the story.

Since its launch in 2010, it seems Instagram has changed everything.

Considering that it's such a simple idea, the image and video sharing app seems to have completely altered the way we all interact with social media.

It's certainly taken over a large portion of our lives.

All of us are guilty of having the odd mindless scroll and Instagram is one of the prime time-wasting apps available to us.

But some worry that Instagram brings out the worst in us.

There's no denying that some aspects of Instagram seem vain, self-obsessed and shallow.

Plus, it validates a constant need for attention.

Many users can end up basing real-life decisions around how much positive attention and affirmations it will receive on social media.

Because from a social media app designed to be a pastime, some have managed to create actual careers based on what they post.

This means they basically have to take it seriously.

Getting the right snap (and posting it at the optimum time) is no joke - messing it up is a problem for more than just online clout.

Being an influencer is serious business.

Often, brands will reach out to collaborate with popular Instagrammers and are willing to spend the big bucks on some sponsored content.

Influencers often get a bad rep.

They can be seen as shallow, work-shy, talentless, and generally out of touch with reality.

But think about whether you'd want to Instagram for a living.

Sure, it sounds fun - but we bet there's more stress that goes into it than meets the eye.

One issue influencers can face?

The sheer instability of their industry. And one Instagram star felt this very harshly this week.

She's 21 years old from Tampa, Florida. Until recently, she boasted an impressive follower count of over 100,000.

In fact, Taylor had done something quite impressive.

She'd managed to turn the followers, likes and comments her internet photos got into a full-time career, and was able to forgo a "real job."

Taylor had not had an easy ride on the internet.

Many took issue with her level of viral fame and her Instagram account was constantly plagued by reports from the public trying to get it taken down.

But for a while, at least, Taylor was thriving.

In spite of receiving more than her share of hate, Taylor had been making it work (and making a living) online.

But earlier this week, she got a nasty shock.

It seemed that Taylor's haters had finally been successful - because she could not seem to access, or even find, her popular account.

Wherever she turned, Taylor was helpless.

It seemed as though her account had just completely vanished into thin air and there was nothing she could do to get it back.

Needless to say, Taylor freaked out.

Not only did the account's disappearance mean years of follower-building was gone in an instant but it also meant Taylor's career prospects dried up before her very eyes.

She posted an emotional video on the topic.

And her visceral reaction to what seems like such a superficial thing has really got the internet talking.

Taylor has since set up a new Instagram and it currently has a paltry 2,000 followers, which is nothing compared to her old numbers.

In her video, Taylor explains the gravity of her situation.

Taylor explained her situation through floods of tears.

"I'm in the middle of editing and my Instagram got deleted. I'm trying to get it back, I'm calling everybody I can and I don't know why it's not working out for me," she cried.

And the real reason for Taylor's concern?

"I know people like to see me be down and be like them and the ninety per-centers - the people who work 9-5 - that is not me, I am in LA to not be like that," she claimed. "I make all of my money online, all of it and I don't want to lose that."

She claims her Instagram following didn't just come out of the blue.

"I've worked so fucking hard to get to where I'm at and for that to get taken from me is the worst feeling in the world," the influencer sobbed.

Taylor shared her fears about having to get a "normal job."

She explained: "What some of you guys have to realise is I have no skills, I'm twenty-f**king-thousand dollars in debt from college so I can't even go to college if I wanted to."

Taylor is particularly worried about working in a certain fast food establishment. She says: "I used to work at f**king McDonalds before I did YouTube, Instagram, before I had 100,000 followers, before I had everything in my life I was a fucking loser. I'm not saying there's anything wrong with working at McDonalds because I worked there but I don't want to go back to that life."

It's safe to say the internet has had limited sympathy.

@7NewsMelbourne @instagram Who is Jessy Taylor and does she make a difference in my life? https://t.co/SUjUTe4GZZ
— Jodie Willis (@Jodie Willis)1554893860.0

Many are surprised that they've never heard of Taylor, in spite of the fact internet "fame" seemed to be her life.

Others found her representative of a wider problem.

Taylor's complaints about having to get a job do seem a little bit out of touch with most people's realities, after all.

It seems the reports to Taylor's account had some very serious reasons behind them. In spite of this, Taylor said: "When people try to hate on me or report me I'm literally trying to be a f**king better person. I want to say to everybody that's reporting me - think twice because you're ruining my life."

It seems we're at a strange point in history.

The connections between real life and social media are both completely separate, and closer than ever, and it's having unforeseen consequences.

We have to make sure we have a life that exists outside of social media, before worrying too much about what's going on online.