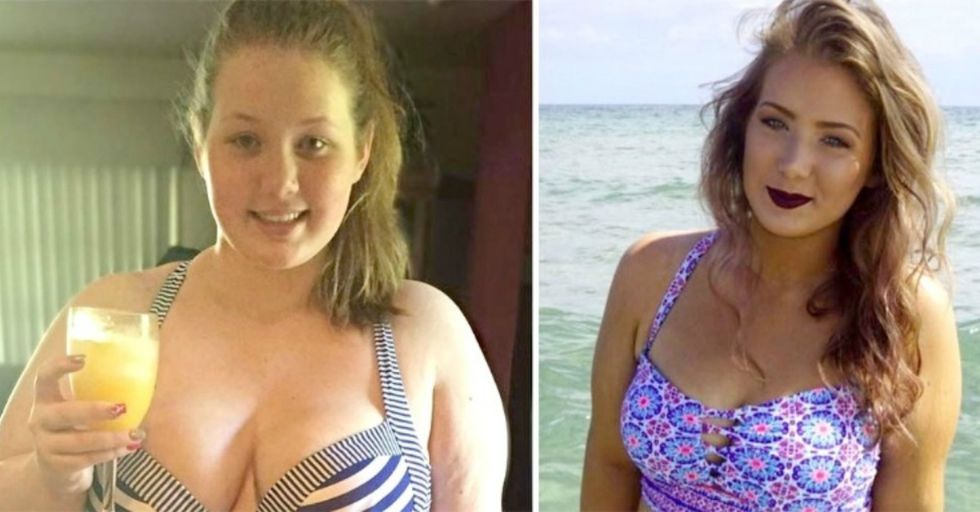 Morgan Bartley is a nineteen-year-old college student who lives in Ventura, California.

Her online journey has included sharing many revealing—though not provocative—photos.

This was an act of willpower in itself, since Morgan has had issues with her body for as long as she can remember.

At 15, bouts of intense physical pain led to doctors discovering that she had ovarian torsion, a condition that they told her might prevent her from ever bearing children.

Even though she was only 15, she became depressed and developed a binge eating disorder, which soon led to gaining 70 pounds.

As you can imagine, being told you may never have children at just 15 years old is a lot to deal with.

"I felt as if my body had failed me, and that I had no control of what was happening with my life," she said. "Bingeing was the one thing I could control, it was my escape."

But at 17, Bartley decided she wanted to "take back control of [her] body and save [her] own life."

She had weight loss surgery, changed her diet, began working out and also seeing a therapist, and she's since lost 115 pounds. You won't believe how good she looks now.

That brings us to today and this picture lauding her success that was taken down by Instagram.

Instagram deleted the bikini-clad photo documenting her transformation without notifying Morgan or even giving her any explanation.

The original post doesn't appear to violate Instagram's community guidelines — she's wearing clothing, after all — and it left her feeling hurt and confused.

Instagram didn't realize the breadth of their actions either.

"Having my vulnerability in that initial post overlooked and rejected was embarrassing and hurtful," she said.

Unfortunately, it's entirely possible she'll never find out what led Instagram to remove the photo.

"I share my journey online in hopes of inspiring others to take control of their own lives, so I was devastated and surprised when Instagram deleted this post from my account in the first place," she said.

"I questioned my own transformation, my own body."

But that wasn't enough to keep her down, and she kept pushing forward.

The story pretty quickly caught fire, and soon every major site was writing about Morgan's post.

And that helped to restore some of the wind in her sails.

"I've worked relentlessly to accomplish what I have, and I refuse to let anyone take that from me."

She hopes to shed another 30 pounds, but she isn't making that her main objection.

Instead, she plans to focus on caring for herself mentally and emotionally, as well as eating healthily.

Doctors have even expressed hope that her positive life changes may restore her fertility as well.

And with her huge online fan response, there's no doubt she has people in her corner.

And kudos to Morgan!

Keep it up girl, you look amazing!