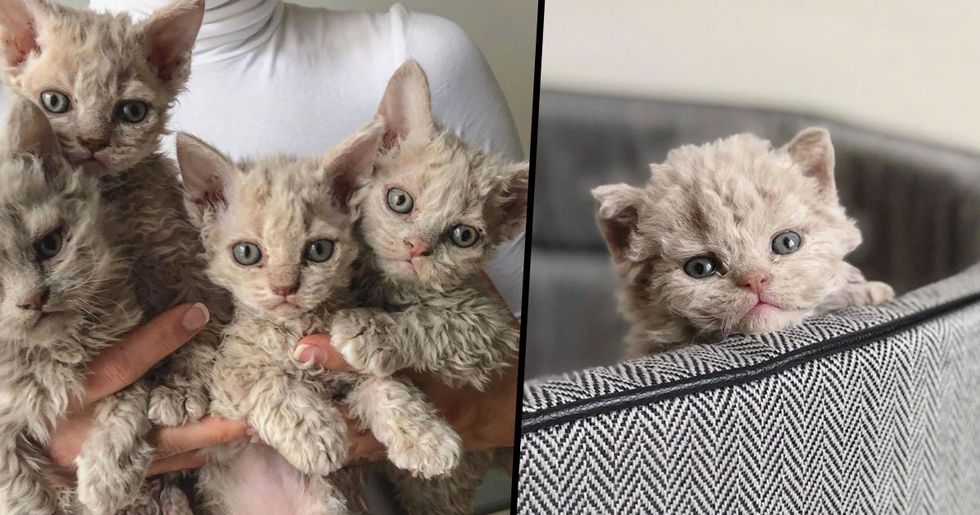 Instagram Has Fallen in Love With These Cats With Curly Coats

I'll put my hands up and admit that I know very little about cat breeds.

I'm the same with types of cars - I probably couldn't distinguish a Kia from a Mercedes, but I sure could tell you whether it was red or blue.

I recently got a kitten from Craigslist, and, as much as I could gush all about Banjo's best qualities, I wouldn't be able to tell you what breed she is. I suppose she's a mongrel? A very cute, symmetrical, white and ginger mongrel, mind.

Since becoming a mother to Banjo, I have learned quite a bit about cats - like do you know that they instinctively climb up high because their ancestors (big jungle cats) would climb high in order to stalk their prey? Well, even though Banjo doesn't have to stalk her prey, given that I'm probably over-feeding her kitten treats as is, the climbing thing does ring true. Whether she's climbing on my shoulder or perching herself on the top of the stairs, she sure does have a natural instinct to climb.

Something else I've learned is that, just like with lab-grown superfoods, you can create new types of cats through selective breeding.

That's what happened in Montana in 1987, when a breeder called Jeri Newman got a particularly curly-haired cat from a rescue shelter. She called the curly kitten Miss DiPesto after the curly-haired lady in the hit TV-show, Moonlighting. Miss DiPesto became the dominant breeder and Newman proceeded to bless the world with this new breed of cat in long and short-haired varieties. Naming the breed after her step-father, the cute breed of curly-haired cats known as "Selkirk" came into the world.

Since then, the breed has spread across the world and the owners of these special cats have taken to Instagram to show off just how cute they are.

And believe me when I say that these Selkirk sure cats are cute... not as cute as Banjo, obviously.

Keep scrolling to judge for yourself...

It looks like a tiny baby otter. Look how cute that lil pink nose is!

Now, whoever owns this Selkirk cat sure knows how to keep it in check. Every time I get my phone out when Banjo's around, she proceeds to curl her little paws around it and chew the corner - as hard as it may be!

Whatever breed of cat you've got, the laundry basket beats its normal bed every time.

I'm not sure that it's anything to do with their jungle instincts... perhaps it's got more to do with the homely instincts they've developed from hundreds of years of being kept as pets? Whatever the genetic profile behind it is, cats absolutely love chilling in the laundry basket.

Caught in the rain!

That sure is one drenched kitty - and, given that its fur is all wet, you can't really get a grasp of quite how curly the hair can be on this breed of cat.

As you can see from this demonstration, the fur of these kitties resembles that of a sheepdog. The thick coat and curly disposition is certainly unusual for a cat.

The best thing about getting a Selkirk cat is that you can sell its fur for ladies' fashion!

I'm only joking, I don't think you can... can you? No, I don't know. I mean, you can sell anything on eBay, can't you? But that isn't why this pictured Selkirk has had its haircut. The thick, sheep-like hair means that these cats have to get groomed from time to time, otherwise they'd start resembling a giant Furby!

Again, just kidding. I suspect that this Selkirk is following its natural instincts to climb onto the kitchen-top. Lo and behold, it turns out that you can feed cats eggs and this is exactly what the owner of the Selkirk kitten called Misty is doing. Well, you really do learn something new every day. According to cat food company, Purina, "cats benefit from eggs' protein and amino acids." I don't know why a cat food company would be the ones to tell people that they can feed their cats eggs - doesn't seem like a very smart marketing move but, eh, there you have it!

How cute is this furry ball of love...

I think that this cat would suit a rugged old fisherman, keeping him company on long journeys across choppy, challenging seas. Aw, yeah.

Maybe Selkirk cats have a better relationship with dogs than regular cats or maybe this duo are a special case. Growing up, my family dog absolutely loved our cat... sadly, Mr. Ollie couldn't stand the dog and friendship never blossomed.

This cat sure doesn't scream "friendly..."

Pompous Albert can't help that he's got such a stern expression and, in a way, it is kinda cute. Heaps of potential for meme-making too, if you're into that kind of thing.

This long haired Selkirk really demonstrates how lovely the coat is.

I'm not sure if you can get a more cuddly-looking breed of cat, it almost looks like it's half-dog, half-cat doesn't it?

This cat is grumpy because it's fed up with being called cute all the time...

He's obviously way more complex and interesting than just being cute and they haven't changed his cat litter in days! Honestly.

This cat is just teasing to be stroked.

That soft fur is reminiscent of cotton candy clouds and childhood teddies.

These Russian Selkirks are just the cutest.

The breed that started in Montana USA really has traveled far and wide as evidence by the fact that the account that shared these two beauties is, from the looks of it, Russian.

Did your mom ever tell you that if you ate your crusts, your hair would go curly?

Well, if that was true, these lil cuties must have eaten loads of bread! - perhaps this owner fed it lots of egg sandwiches!

... I mean, besides the fact that Banjo isn't a Selkirk breed, so her fur doesn't have that cute curly sheep-dog thing going on.

I think that it's fairly clear who rules the roost in this house...

And how could you not give a cat that cute all of the privileges reserved for humans? Remote control? Take it... Comfiest seat in the house? It's yours! Well, that egg salad was going to be my dinner but... oh what the heck! You're just so darn soft and squishy!

Fortunately, they make up for it in fluffiness and affection.

The curliness is less pronounced on the shorthaired Selkirks.

As you can see from this shorthaired Selkirk, the curliness is much less pronounced than it is on the long-haired ones. That being said, the longer the kitty goes without a haircut, the more likely it is that curls will develop.

100% recommend getting a cat tree.

As I said earlier, cats just love to climb, and now these cat trees have started popping up everywhere. I got one for Banjo and, although she's still pretty cautious of it (and seems to enjoy the cardboard box it came in way more..), I'm confident that she'll brave it one of these days. The good thing about these is that the tree "trunk" is a scratching post, which will wear down your cat's sharp nail and prevent it from destroying all of your nice furniture!

A new generation of Selkirks...

Have you ever seen such a cute lil kitten? This baby Selkirk has the nicest wavy-haired coat - it looks as though it was bathed in angel salt water before being plucked from heaven, landing down here on earth.

They are being bred in Switzerland by a woman called Eleonora Muccio. This breed is said to be different from the original Selkirk breed (which are now being coined Selkirk perm). The Selkirk perm kittens have a distinctive curliness to their coat, whereas the Selkirk Rex's fur is much thicker and plusher.

In true MGM style, let's end with a roar from a member of the Felidae species...
20%

$37.84 $30.27
Buy Now
See More Deals
We hope you find these deals as awesome as we do! Just an FYI: we may receive a share of sales from links on this page