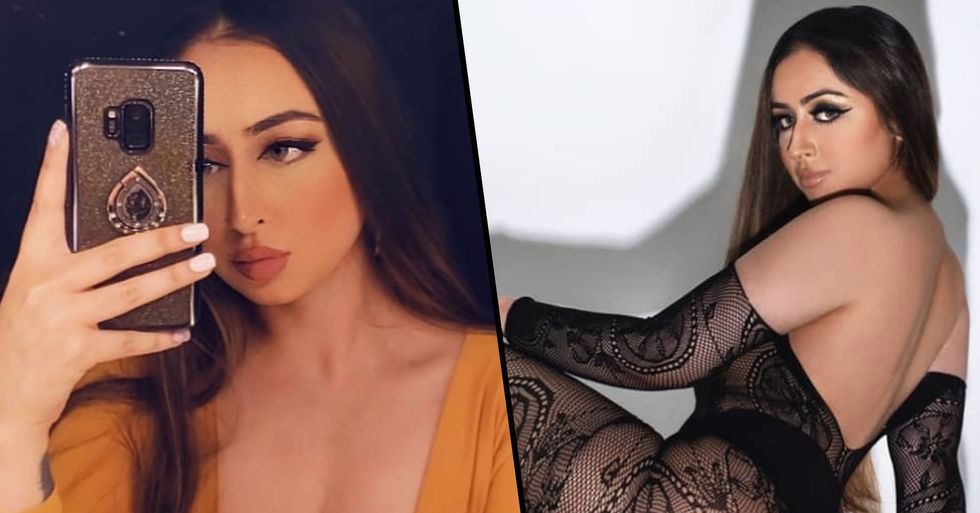 An Instagram model was left with a butt so big after botched plastic surgery, she couldn't sit down for 6 months.

When it comes to a woman's body type, all shapes and sizes should be embraced and celebrated as each is unique and beautiful. But, in recent times, the curvier woman has been stepping into the spotlight...

More and more people are pushing aside body-shaming and are learning to love themselves just the way they are. Instagram is the biggest platform when it comes to body image, and there are now more and more accounts dedicated to a healthy and positive body image, such as British models, Iskra Lawrence's, Instagram.

Iskra is a firm believer in looking after, and learning to accept, our own bodies. In an interview with Harper's Bazaar, she said: "I spent way too much time comparing myself to other people and you can never be them... This is our body, we have complete ownership of what we choose to do with it and I believe that if we fall in love with it we will want to look after it and it’s encouraging everyone to be able to do that."

Learning to love yourself can take time...

We are living in the Kardashian era...

The Kardashian family are the rulers of Instagram and their lavish lifestyles and impossibly perfect figures dominate our screens daily. But they are no strangers to photoshop mishaps in an attempt to enhance their already unrealistic bodies and curves.

Kylie Jenner is now well known for her enhanced look...

It's no secret that the young billionaire has had work done - take her infamous lip fillers, for example. But, despite Kylie denying having any more surgery, it's pretty obvious that work has been done to enhance her noticeably curvier body that mimics that of her sister, Kim.

Kylie's sculpted behind seems to have created a trend...

Instagram is now obsessed with having big bums, and it's clear that it has stemmed from these unrealistic images posted by the Kardashian clan suggesting to us that this is how a beautiful woman should look.

And it isn't okay that people are now thinking that they have to look like a Kardashian in order to be beautiful... because this certainly isn't the case.

Some people have taken things way too far in trying to achieve their desired body shape...

And many have absolutely no regards for their own health and wellbeing when it comes to looking "perfect."

Shilpa Sethi is one of these people.

Shilpa is a twenty-five-year-old Instagram model from New Dehli, India, and as you can see... she loves to embrace her curves.

She earns a living as a model...

And she also has an OnlyFans account that has proven to be very popular.

As beautiful as Shilpa is...

It's safe to say that nobody looks like this naturally.

She has been very open about her Brazillian Butt-Lift...

She had this procedure done in Miami when she was twenty, which involved fat being taken from her waist and inserted into her buttocks to enhance the size and roundness of her behind.

This is what Shilpa has always wanted.

Speaking to the Daily Mail, she said: "I have always admired a curvy body and I was very flat at first. My mom said she didn't want me to have it, but I had it anyway."

But soon after she underwent the dangerous procedure, things began to go wrong.

"I chose my doctor based on what I later discovered to be fake reviews," Shilpa admitted, "That first surgery was botched, and I had complications immediately after the procedure."

She very quickly began to experience a lot of pain and discomfort.

The model decided to investigate her doctor and she uncovered a culture of deception in the cosmetic surgery trade.

"His office staff members had bribed every patient in the office with free [pain relieving] Arnica cream for their fake reviews."

Shilpa is angry with those who were bought off to write false testimony.

"People don't care about other people as long as they get what they want from writing their fake review," she said.

Not only was the model left in a lot of pain...

But her behind was also left completely lop-sided. "It was very painful, and I wasn't able to sit on my butt for months," she explained.

Shilpa went on to have 3 more painful procedures in Colombia to fix the botches...

And even though they have set her back around $60,000, she can now live comfortably and happily.

Shilpa's terrifying experience hasn't put her off surgery, however.

She has decided to treat herself to breast augmentation as her final procedure.

But the model wants her story to pose as a warning to others interested in having the same procedure.

"The doctor who did my first surgery killed one girl last year, aged just twenty-eight. She had a fat embolism. People need to be real with each other on surgery and it's big, it can take your life or other peoples."

It is of the utmost importance to do your research before considering any form of plastic surgery...

And people should certainly consider Shilpa's story before rushing into any type of invasive procedure such as a Brazillian Butt Lift. Make sure to keep scrolling to read about the controversial mom who encouraged her fourteen-year-old daughter to get plastic surgery...