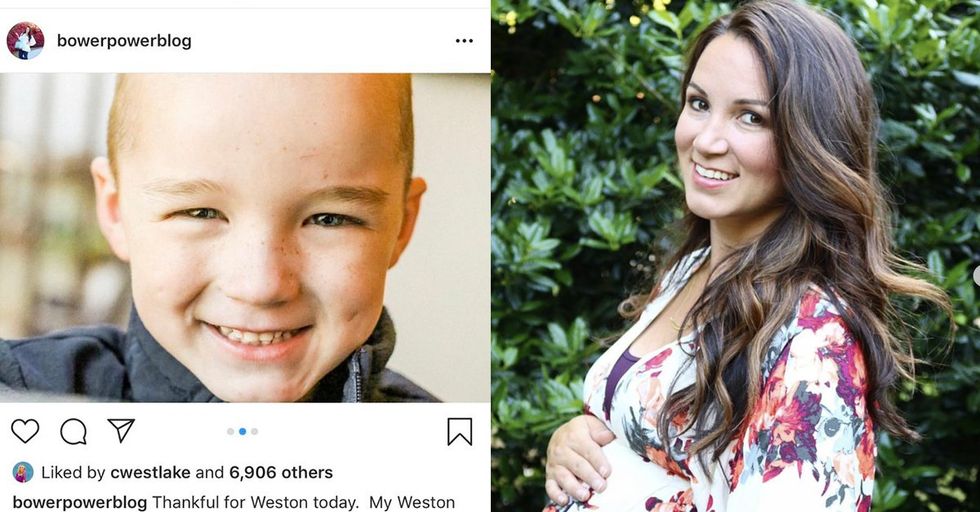 First things first, Instagram and the rest of social media has basically melted all of our brains to be obsessed with the approval of our friends and family, and most importantly, strangers from the Internet we've never met, but yet care deeply for.

If you have never counted the amounts of likes your Instagram photo of your Caribbean vacation got compared to your friend Sarah, who also went to the Caribbean on vacation, then congrats, you are in the minority and a better person than most of us.

Instagram can be a great tool. I've used Instagram to help me plan trips, find restaurants, and of course, stay in touch with friends who I wouldn't see otherwise. But, it's also a big fat jealousy machine full of fake moments that were perfectly curated to make you insanely jealous of everyone else, especially your friend Sarah.

And this weirdness increases tenfold when people bring their kids into the mix. Specifically, people who make their living Instagramming photos of their kids. People who document their children's lives over social media are a huge industry. And while people have all kinds of opinions about the ethics of this in general, this week people thought one mommy Instagram went way too far.

If you don't have kids, you might not know what mommy blogs are.

Before Instagram, mommy blogs were actual blogs where a mom wrote about her family and shared photos.

The blogs were often gritty and real, showing real struggles of parenthood.

And while getting followers was a goal, usually blogs went viral by accident. Moms who wrote about their families were found by other moms who found seeing other parents' going through similar struggles comforting.

Since the rise of Instagram, mommy blogs have turned into something sort of different. As an article in the Washington Post put it, "The biggest stars of the mommy Internet now are no longer confessional bloggers. They're curators of life. They're influencers. They're pitchwomen. And with all the photos of minimalist kitchens and the explosion of affiliate links, we've lost a source of support and community, a place to share vulnerability and find like-minded women, and a forum for female expertise and wisdom." A rose-colored glass version of motherhood: like whatever is going on in the photo from the post above.

What was once a forum for moms to share their real experiences, mommy blogging was now about the same thing everything else on Instagram is about: perfection.

You've probably seen these types of Instagram posts. A gaggle of children awash in a white light, the spectrum of which does not exist within the confines of this reality, maybe they are laughing, maybe they are baking cookies, maybe they are all standing in a field for some reason.

Suddenly through the lens of Instagram, where everything has to be shiny and bright, all of these mommy blogs started to look basically the same. Photos of families that have it all together and always look adorable. Although they post about life's "realness" frequently, those "real" moment often seem small and only mildly inconvenient compared to the joyous scenes of their children bathed in that signature white light: a spilled cup of cereal, a braid that is just a bit messy, chocolate icing on an otherwise glowing face.

A series of curated photos of a life that like everything else on Instagram makes you feel happy because it's beautiful, but also sad because it's nothing like yours.

And the moms who run the most popular Mommy Instagrams make a lot of money.

Depending on followers and engagements, some moms can make up to $3,000 a post.

But it comes at a weird cost.

The only way to make money on Instagram is to sell products. Which means you have to have a lot of followers and a lot of likes so that those people will see you endorse the products. Moms are often awkwardly hawking products they were paid to endorse in conjunction with sweet, supposedly real photos of their kids or themselves using them.

It's basically an alternate reality where everything looks beautiful and effortless but it's unclear what exactly is real.

And so it's no wonder that every once and awhile, things get really, really weird.

Because these moms aren't just selling themselves and their white light bathed lifestyle.

In a way, they are selling their kids, too.

Omg this Instagram mommy blogger is celebrating her sons bday by writing about how out of all her kids, he “statist… https://t.co/ZEAqcF78kL
— Stephanie McNeal (@Stephanie McNeal)1542647405.0

The post talked about how "from a statistical view" her son was never liked by her Instagram followers.

He never got the same amount of likes and comments as her other kids did.

She worried that his photos just "never hit the algorithm right".

And she worried that one day he would see how many likes his brothers and sister got compared to him and feel insecure about it.

Because it was probably her fault he wasn't getting enough likes on Instagram, not his.

Bower said she's worried he will look at the numbers one day. She wants him to know numbers aren't everything.

Which is a good lesson. Except for one thing, she is the one who generated those numbers, not him. He's six.

She profits off of this Instagram, which means that to her the likes actually do have value: monetary value.

So whether she understands the irony or not, she is posting a photo asking for likes that will increase her value saying she wants her kid to understand he doesn't need likes to have value.

It's obviously not how she meant it to come off.

@stephemcneal Every night at dinner, I show my children their performance metrics on social media and we discuss ho… https://t.co/orSPyQzCW3
— Trusted Source (@Trusted Source)1542656132.0

But it was hard to read that post and not feel like she was shaming her kid for not being as valuable to her as her other kids on Instagram.

And had theories about what was going on here.

It made people very uncomfortable.

And they felt like she was really out of touch.

Even Chrissy Teigen weighed in.

Which probably helped to boost how viral this thing went.

And in it's place, she posted a long series of Instagram stories explaining why she posted the photo and why she chose to take it down.

Before she took down the post she said, "When I shared that last picture about Weston being born and I described him and how wonderful he was and how he didn't get as many likes, its because that was a personal growth for me that I had to learn like everybody does. I had to learn that the likes do not reflect much to me, that I had to choose that. I work with brands that tell you the opposite. I read articles about how to grow your Instagram that tell you the opposite."

She went on to explain that people who don't run Instagram businesses don't get what likes mean to those that do.

"I know that a lot of people aren't going to understand because they don't run a business account. and that they don't run their business based on social media and their blog content. I get it, it's a weird job, one that I'm very grateful for, but it's not normal."

She went on, "A lot of people thought that I needed him to be liked. No, I don't. I like him. Nothing's going to change that."

Update for you all: Katie Bower has archived the post bc the drama was out of hand, but she said on IG stories she… https://t.co/xXVQ4J0xOB
— Stephanie McNeal (@Stephanie McNeal)1542658825.0

"But kids are smart. Kids know there are likes on photos and its very human nature to compare. And for me, my personal growth journey is teaching my kids it doesn't matter."

She goes on to address people who think she shouldn't put her kids on social media.

But people felt like she was kind of missing the point.

@stephemcneal If she deleted her Instagram account, then her kid would never have to know how unpopular his picture… https://t.co/SPlBwBKHHR
— DailyMusings (@DailyMusings)1542649793.0

She created the Instagram that she's now worried will make her kid feel bad for not getting enough likes.

Other people explained the complicated in more simple terms.

I mean, yeah. The future is going to be an interesting time for the now famous children of Instagram.

After Bower deleted the post, she took to Instagram stories again to explain why she took it down.

According to her, it caused a lot of "drama."

She said, "Unfortunately this is kind of the way it goes with social media if you chose to be vulnerable and show something that isn't perfect about yourself."

"I got so many messages from so many people that said thank you so much, they struggled with the approval of others as well and it was a hard journey for them and that was what I was talking about."

But it just felt like she was missing the point.

This wasn't about people jumping on her for not being "perfect". The easiest way to get out of any criticism on the internet is to say people expect you to be perfect, but nobody was expecting her to be perfect. The problem for many people was that she was using her kid to generate likes and then putting the burden of not getting them on him.

She may have learned the lesson that likes don't validate you and she may want to pass that lesson on to her kids, and that's great.

@stephemcneal look, he's going to have to learn about personal branding at some point
— Tom Phillips (@Tom Phillips)1542649886.0

But practically, it seems hard to teach your kids that likes don't validate you when mommy Instagrammers are literally making money in direct proportion to how many likes photos of their kids are getting.

I truly don't think she posted the photo asking for likes in a conscious ploy to get more likes.

But this just shows how weirdly social media has twisted our brains into validation factories.

Also, a lot of people pointed out that Instagram may seem like a huge part of our lives now, but it's probably not going to last forever.

By the time these kids are grown up, they'll have to worry about some completely different form of external validation that we can't even fathom.

Anyway, maybe go lie down for a while.