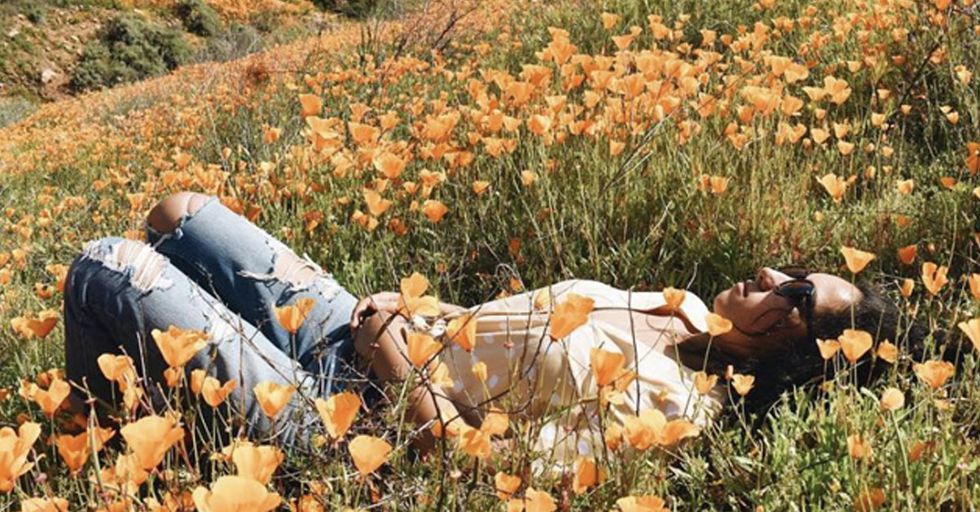 It's the end of March, and spring has officially sprung in Los Angeles -- like three months late, but hey, we'll take it. It has been an unusually rainy season for us in Southern California, and thank God for that. The drought is now almost officially over -- that is until another gaggle of rich, careless celebs decides to drain and fill their two-story swimming pools with new water because their old water was "too swam in." Hey, like I always say, you can only wear the same dress once, and you can only swim in the same water once. The Hollywood Way.

But this wet season has also brought a couple of new visual surprises to the normally dull-brown wildlife surrounding Southern California. A fresh, uplifting green has taken over the hills that surround this desert region, and it has Instagram models salivating.

Hundreds of wanna-be influencers are taking to the trails and ruining everything.

I don't know if you've heard, but it's been raining in Los Angeles lately. Like a lot.

Enough for some locals to consider moving to somewhere warmer like... *shudders* San Diego.

And I'm not talking "a lot for Los Angeles".

And it's had some really cool side effects.

For one, my Seasonal Affective Disorder kicked in a couple of weeks later than it normally does.

It also meant that I had to buy an umbrella.

That was a real low-point in my life. Marching into the nearest Rite-Aid completely soaked and only buying one item. It was embarrassing.

But perhaps the best side effect: the Super Bloom.

No, it's not some kind of improvement to Chili's Bloomin' Onion. Sorry, Michael Scott.

Allow me to explain... with visual aids.

This is normal, boring, dry California.

You know, Amber Waves of Grain and all that.

Are those the words? I was never very patriotic as a child.

Hell, John Steinbeck even wrote about their beauty. But I'm not going to bore you with Steinbeck. This isn't 8th Grade lit.

But most of the time, in the dry California climate, it just looks like this.

Trash, dead grass, sadness. All things people have called me. They don't have stock ph0tos of trash deserts online, so just... use your imagination.

But every once in a while, this happens.

It's called the Super Bloom. And it's kind of amazing.

There's seeds in those mountains!

And they lay dormant until they actually get some freaking rain. It's incredible.

It's like being transported from Missouri to Middle Earth overnight (sorry Missouri).

And of course, the Super Bloom gets people excited to walk some of the amazing trails California has to offer.

Who doesn't want to get up close and personal with those beautiful California Poppies? They're the state flower because they cover the mountains with orange, but residents rarely get to see them because the state is so gosh-darn-brown all the time.

Heck, it's even a great time to snap a quick selfie and get a new profile pic for spring.

Because no one wants to see you in your skiing garb when it's the middle of April.

Seriously, how could you pass an opportunity like this up?

If I pose like this in these poppy's, my Tinder profile would explode, despite my lack of attractiveness or height.

Well, as it turns out, you're just killing flowers when you do this.

You monster (not you, I'm sure you're great).

When the flowers are trampled like this, they're less likely to spring back up in the future.

Plus, according to rumors I heard as a small child, destroying a California poppy will land you in jail. And no one wants that.

This will seriously diminish the possibilities of Super Blooms in the future.

So will the lack of rain, but this will do it too.

And it's gotten so bad that some trails are being shut down.

It's never fun to see parts of the state get shut down like this because of the actions of a small group of people, but it's real.

In fact, all of Lake Elsinore park in California is closed for the time being because of this problem.

The park saw thousands of visitors over the weekend and just absolutely destroyed highway traffic that I'm sure was already terrible.

But local residents needn't worry any longer, because the park is closed until the mountainside returns to its normal dull-brown color we're all used to.

Which is downright depressing, humanity.

During the government shutdown, people were cutting down Joshua trees in California state parks.

Those things take like 300 years to grow! Why are you cutting them down?!

Humanity is ruining this planet in a number of ways, and it doesn't look like any of us care enough to slow down.

I'm looking forward to Planet Earth 30 in a few decades where it's just archive footage of how beautiful the Earth used to look, juxtaposed with people trying to grown beans on that plastic island that's forming in the middle of the Pacific.

Hell, if the ice caps melt and flood the land, we can all just live on rafts.

This has kind of gotten off topic, but I think it's worth saying.

My point is, if you want to spend some time outside this weekend (and please do!), stick to the trails as best you can.

And keep your pets on the trails too. I know Hank the English Bulldog looks super cute covered in pollen and sneezing his face off, but it's bad for the flowers, and honestly, it's bad for Hank's already stunted nasal cavity.

So in closing, here are a few pictures of poppies that you can move real close to your face so that you don't have to trample any this weekend.

It's so cool to see the mountain in full bloom like this.

Honestly, some of these pictures look like old school Windows XP wallpapers.

Unfortunately for California residents, the mountains usually dry out in a number of weeks, so get on the trails (and only the trails!) while you still can!

Even the desert desert is getting involved.

Joshua Tree was already beautiful, but look at all these new flowers!

Thank you for listening to my rant.

Hopefully this can educate a couple of people. If you didn't know this was a problem, that's okay! Now you do and maybe you can be the one informing others in the future! I hope everyone has the best spring ever -- it's gonna be a good one.