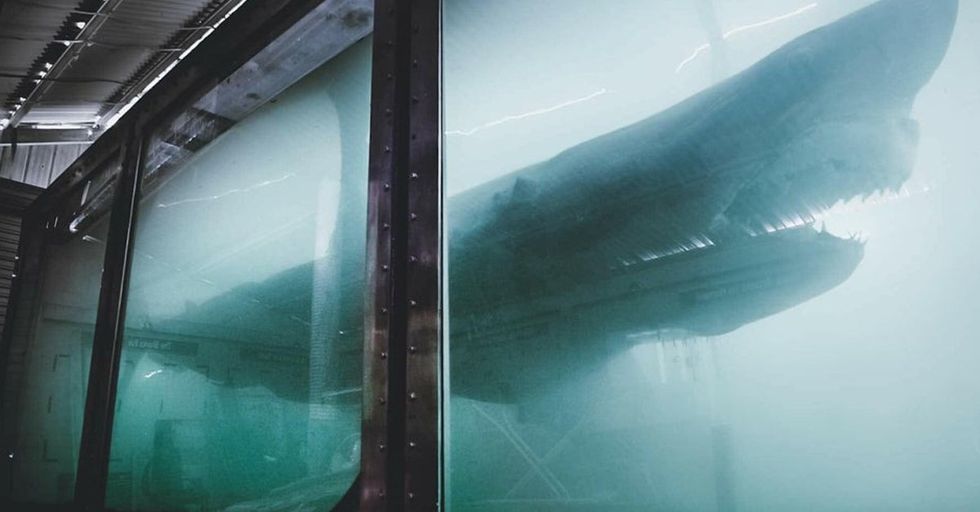 The Most Interesting Pictures on the Internet

Before the internet, you could go into the library and feel overwhelmed. There's so much information in all these books, and there's no chance you'll ever get to read them all! But now that we have not just a library's worth of information in our pockets but the information of all the world's libraries combined in our pockets, we have to just shrug our shoulders and acknowledge that we're not going to know everything. Sorry.

That's why depositories like Reddit's /r/InterestingAsF-ck subreddit are so important. They collect all the most interesting information that could have so easily slipped past you and serves it up on a silver platter.

We've collected some of the most interesting pictures the subreddit's ever produced. Get ready to look at these pictures, nod your head, and go, "yes... yes, this is interesting."

Sometimes you lose the battle, but win history's favor.

Just gonna say it: this wolf is too big.

As though wolves weren't scary enough at regular sizes. At least this guy is still walking around on all fours, because one it becomes bipedal, we've got real-life werewolves on our hands.

Is Australia generally this snowy?

It's snowing in Australia at the moment and it's not every day that you get to see Kangaroos hopping in the snow. - l-Orion-l

There's magic everywhere — even inside rocks.

When this Redditor split open a rock, they were able to show off the stunning opal inside. Meanwhile, the only thing I ever find inside the rocks I split open are more of the same rock or, one time, the key to my neighbor Keith Everson's house. (He hid his spare inside a fake rock. Pretty smart, if you think about it.)

This wolf and bear pair were documented traveling, hunting and sharing food together for 10 days. - Zusical

I'm almost afraid to see what his drawings look like next year.

I've been training myself how to draw photo-realistically for a little while now. Here's my best sampling from each year of progress. - deaki682

Great, now the computers are better artists than us too?

Nvidia's new AI can turn any primitive sketch into a photorealistic masterpiece. - PYEEDM

Engineering student designs a "mobile airbag" that deploys when your device is dropped. - Thund3rbolt

Gosh, I sure hope the sun's okay.

A massive eruption on the sun just happened a few moments ago and I was able to capture it from my backyard. At least two Earths could fit in that loop. - ajamesmccarthy

I feel terrible now about every egg I've ever eaten.

Guy buys Quail eggs from a supermarket and manages to get one to hatch. - dickfromaccounting

Some relationships are just destiny.

Married couple in China discover they appeared in same photograph as teenagers. - dickfromaccounting

After sitting in a hospital freezer for a month and a half, a large section of my skull has been reattached. - QuiGonGiveItToYa

Gotta get loose before you swing an ax around.

I have always wanted to eat an entire building.

The Empire State Building, complete with King Kong, made entirely out of chocolate. - Gato1980

About as teeny tiny as it gets.

Aww, look at all those cute lil' skeletons!

This is the x-ray of a pregnant dog. - GoodGriefWhatsNext

It's nice to feel interesting sometimes.

If you lie on the ground and move your arms and legs, the emus will approach out of curiosity. - Pirate_Redbeard

I'm more excited to be a real-life Hulk, personally.

One step closer to building a real life Ironman. - cyan1618

Sharks: our most beautiful and terrifying frenemies.

This is a decaying Great White Shark, left to rot at an abandoned Wildlife park in Melbourne. - ILikeSpaceandMemes

Dude, gravity is the worst.

Astronaut who spent 197 days on the International Space Station shows how hard it is to walk on earth again. - commonvanilla

Look at them gams!

Apparently owls have a pair of slender legs under their fluff. - GallowBoob

Usually, science-based gifts are lame, but these grandparents knocked it out the park.

Look at this framed, holographic microscope I got from my grandparents that you can actually look into. - The_Moral_Support

I, for one, welcome our new light-based elephant overlords.

A German circus is using Holograms instead of live animals for a cruelty-free magical experience. And it's cool. - GallowBoob

As close as we're going to get to an answer to the "Would you rather fight 100 duck-sized horses or 1 horse-sized duck" question.

What happens when 3 professional soccer player take on 100 kids? - Morty_Goldman

What are their bones even made of?

If a cat's head fits, its whole body does too. - MaZZeL3L

Wonder if this was the grandma who bought that holographic microscope?

This Rabari woman is over 110 years old and the matriarch of a village. She gave birth to 11 children, and her village is populated by her offspring and marriages only. The population is 250 people, and everyone in the village is her family. Most of them by blood relation. - Drown_In_The_Void

This slow boy lives in the danger zone.

Sloth crosses the path of a giant python unscathed. The snake was most likely digesting another meal already BUT STILL. - grettaaa

It looks like the sun joined forces with lightning in a massive Avengers-level crossover.

Ball lightning is a rare phenomenon. A ball of lightning lasts much longer than the brief jagged lightning usually seen. The ball can move, appear randomly and has the potential to be very dangerous. - allthekos

This blows my mind.

Images showing how forced perspective was used to film Will Ferrell in Elf. - Meunderwears