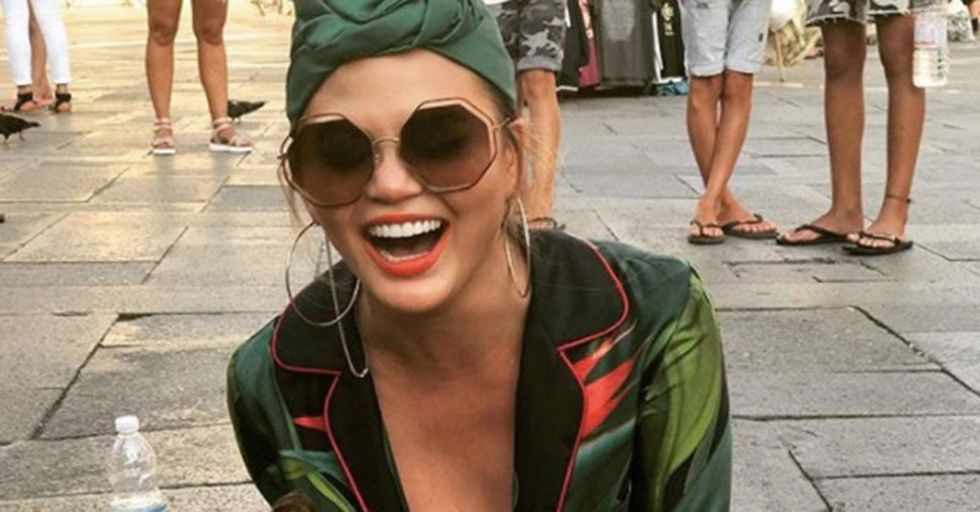 If you spend pretty much any time on the Internet, you probably know Chrissy Teigen, so let's not waste time on an introduction.

She's famous as a model.

She's famous as the wife of heartthrob musician John Legend.

They're a pretty perfect couple, actually.

She's famous as an outspoken Tweeter, too, taking on social issues, and just...chillin'.

This is one of her less political posts, but she gets active for sure.

And to many, she's famous as a very funny mom, which sort of leads us to this whole story.

Let's get into it now that we're all familiar, ok?

She was documenting a recent trip to Italy with her adorable daughter Luna. Nothing weird there, right?

Well, a picture she posted got a little...risque, and she explains why.

It turns out she was strolling around the streets of Italy showing off a little more boob than she realized.

Well, she did realize, but that's where the fun part comes in.

She wasn't going for a sexy look.

Nope. It was something far more mundane...and relatable.

She revealed to People about her sexy outfits...

"If anyone sees a photo floating around of me with my entire cleavage hanging out, sitting in the middle of a square in Venice, it’s because Luna broke both of my buttons – ripped them off and threw them to the side."

The culprit is pictured above!

Moms can relate, as kids are always grabbing whatever they can, including boobs.

But it may not have been so clear in this case, because Chrissy can pull that look off, and has many, many times.

These are accidents courtesy of a grabby toddler. Or so she says... But as you'll see from the following pics, you can't be blamed for thinking otherwise.

Because as much of a mom as she is...

And when a supermodel's showing some skin...

...your first thought might not be "I bet a baby caused this."

But as we all know, when you're a mom or dad with a kid in tow, buttons can go flying.

It's just that the result rarely gets this much press.

Thanks, little one, but Mom's doing just fine on her own.