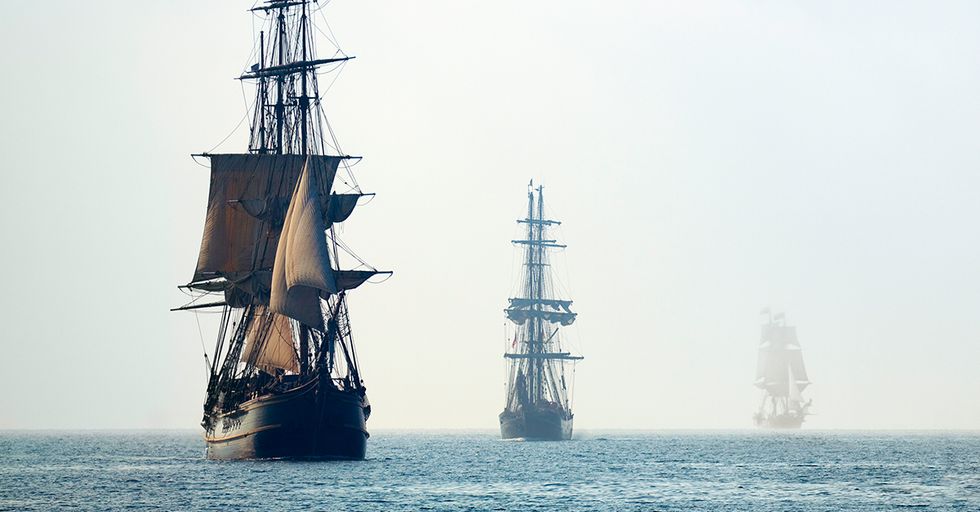 Love is complicated, folks. There are some relationships the world may never understand– like Amanda Teague's, for example. Amanda is an Irish woman who married a ghost pirate. Yep, that’s not a typo – the pirate groom had died 300 years ago. And if that doesn’t boggle your mind enough, Amanda is now reporting that the two of them have broken up, less than one year after they got married.

There’s a lot to unpack here. If you thought your relationship problems were crazy, then learning about Amanda’s bizarre love journey will give you a whole new perspective. Keep reading to find out about all the twists and turns of this head-scratching relationship.

How did this all begin?

In 2015, Amanda Teague was working as a Jack Sparrow impersonator.

At the time, Amanda was a divorced mother of five.

She says her relationship with the pirate ghost began when she was laying in bed at home.

She explained that she sensed the presence of a 300-year-old Haitian pirate named Jack Teague.

After six months of contact with the ghost, she developed feelings for him.

So they decided to make it official.

They tied the knot on a small boat in the Atlantic Ocean.

The groom couldn’t exactly make it to the nuptials – but they still held a ceremony.

She said their relationship was as normal as any other.

Just like relationships with two living participants, Amanda and Jack would go on romantic getaways, occasionally argue, and bicker over jealousy.

They had to skate around legal issues.

via: Amanda Teague via Newsweek

In the UK and Ireland, it’s illegal to marry a person that is deceased– so that’s why their wedding was on a boat, in international waters.

This could be a first.

via: Amanda Teague via Newsweek

Amanda said she was the first person in the UK or Ireland to marry a ghost, though the law didn’t recognize her marriage officially.

Their vows were definitely unique.

via: Amanda Teague via Irish Mirror

Jack gave his consent through a medium, and Amanda changed her last name to his.

She was prepared for potential legal challenges.

She told Newsweek, “If in the future I am challenged, [legal advisers] have told me that there are certain routes we could go down to try and get our marriage recognized by law... I am willing to do it and fight [for our right to be married]."

She says she communicates him through mediumship.

She doesn’t know what he looks or sounds like but says that he is of African descent and presents himself as a man in his early 50s (his age when he died).

Amanda says that her husband was the inspiration for Jack Sparrow.

Yep, the Jack Sparrow, from the Pirates of the Caribbean movie franchise.

In fact, she says they met because of her obsession with the movies.

It was only natural that he would reach out to her since she was a Jack Sparrow impersonator.

However, some say that the character of Jack Sparrow wasn’t based on a real person.

He was dreamed up by screenwriters Ted Elliott and Terry Rossio. He was inspired by the real-life Keith Richards and Looney Tunes character Pepé Le Pew.

Unfortunately for Jack and Amanda, their love story has come to an end.

On social media, Amanda stated, “So I feel it’s time to let everyone know that my marriage is over. I will explain all in due course but for now, all I want to say is be VERY careful when dabbling in spirituality, it’s not something to mess with."

PSA to all single folks: being in a relationship with a ghost isn’t all it’s cracked up to be.

There are even more wild details about Amanda’s past.

Buckle up, because we’re going there.

Do you remember how she used to be a Jack Sparrow impersonator?

Well, she was quite committed to her role.

She spent £4,000 on her character transformation.

The most expensive part of the transformation?

She even changed her name.

She legally changed her last name from Large to Sparrow (before later changing it to Teague).

She spent up to one and a half hours each morning getting ready for her job.

Amanda would put in dreadlocks and draw on a full face of facial hair.

As she told The Irish Post in 2015, “No one bats an eyelid when I walk through the streets of Belfast. No one really insults me anymore, everyone seems to know me. In the past I’d get insults and some abuse but now it’s mostly complimentary."

But most importantly, she has enjoyed herself.

“I’ve even taken classes to speak like him, and I’m really enjoying my lifestyle as a modern-day pirate," she said.

People on Twitter are as confused about all this as we are.

With a Twitter thread sparking discussions about Amanda's unique lifestyle.

She even took to Facebook Live with her then-ghost-husband.

Even Busy Philipps weighed in.

Just as fast as many great love stories begin, then come to an end.

But hey, maybe there’s hope for the rest of us.

@darcymaine_espn This gives me hope that there’s someone out there for me … even if they aren’t in corporeal form.
— Adam Bernard (@Adam Bernard)1519165601.0

Our thoughts exactly. Be sure to share this weird and wonderful story with your friends on Facebook!