Is Ivanka Trump Faking Her Own Fan Mail? | 22 Words 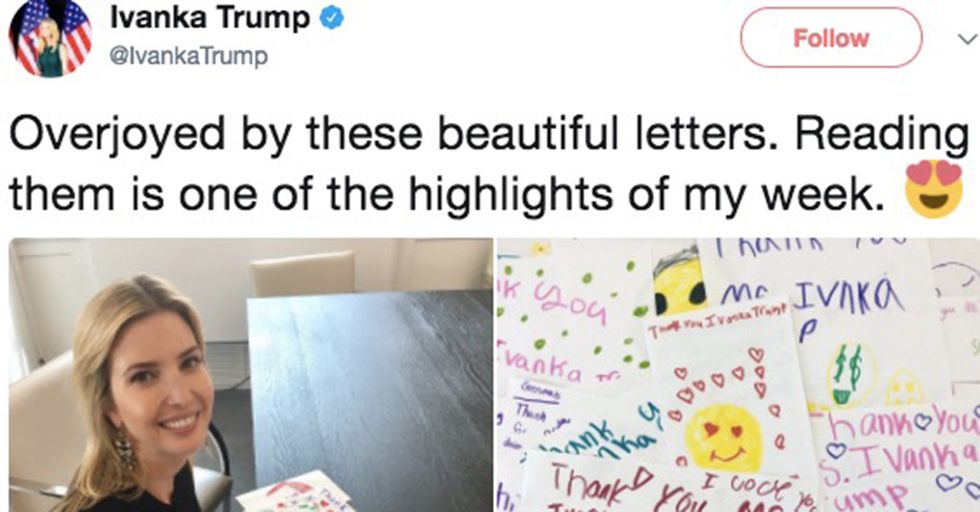 Is Ivanka Trump Faking Her Own Fan Mail?

Ivanka Trump is a divisive figure these days for many reasons, but now, she's under fire for something surprising.

Could it be that Ivanka, or someone working for Ivanka, is forging her fan mail?

Given that she's Donald Trump's daughter, Ivanka Trump is constantly in the press.

Some see her as entitled. Others think she's an innocent bystander in this strange political climate. And some feel that she has a responsibility to stand up for what's right, regardless of her ties to the White House.

So no matter what she does, she's going to be scrutinized and, likely, criticized.

Some of it is pretty ridiculous commentary on her hair, clothes and overall appearance, but other complaints are a little more understandable. There are all types, as you would expect in the world of politics.

But her most recent post has a LOT of people up in arms.

Some are just joking, but others are genuinely angry.

It's a little braggy, but is that so bad?

This woman didn't think so.

But others certainly disagreed...

Not everyone agreed that Ivanka was a positive role model for young women.

Again, no big surprise here that people have their opinions about Ivanka, but that wasn't all. Things got much weirder.

Upon closer examination, it looks like there's an interesting happy face in the fan mail.

Let's get a closer look.

Either these kids are extraordinarily perceptive and know that the Trump family is quite fond of money, or perhaps some interns created fake drawings and notes from kids using random doodles which happen to include dollar sign smiley faces.

The smiley face with dollar signs for eyes is pretty perceptive for a kid, and certainly pretty snarky coming from a staffer.

Lots of them pointed out this glaring detail in the wider shot of the fan mail. They got their own dig on the Trump family in there as well.

Or, perhaps the kids who drew these knew exactly what they were doing. Kids are getting smarter all the time.

Maybe the little ones realized the way to make it onto Ivanka's social media feed was via the almighty dollar. Others were a little more direct.

It's widely known that the President is a big fan of his daughter, so...

Nah. Too easy, but still... a little funny, regardless of political affiliation.

Comedian Andy Richter had some fun with Photoshop.

Not saying it's in great taste, but imagining little kids asking for proof of this long-rumored tape sounds is ridiculous enough to elicit a chuckle.

Actor Kal Penn fired back with a letter he sent to President Trump.

It's the mass resignation of the President's Arts Council. The first letter of every paragraph spells "resist."

That one seemed to be the mic drop on the whole thing.

People aren't sure she'll get the message given its wordiness.

One last piece of evidence for you to weigh in on.